In 2020 we celebrated our 10 years anniversary, with the publication of a total of 340 open access articles since the first issue was published 2010. With the opportunity of this celebration, we want to thank the School of Education at Umeå University in Sweden, for supporting the creation and continuation of the journal, and of course the authors, reviewers, editorial board members, readers, and publishers, who have contributed to the success of the journal, as one of the first high-quality open access publications in the field.

We kick-off the second decade of the journal by publishing two editorial pieces, aiming to present Education Inquiry to old and new readers and setting out our ambitions for the future. We take a look back at the origins of the journal, and the vision of the founding editor (see below). We also provide some reflections on the state of the journal from us as current editors (see below).

As a special celebration plan, we have put together a list of published articles from the journal since the original volume from 2010. Our intention is to let these articles illustrate the richness and diversity of education research areas, methodologies, and spread of authors from within and beyond Sweden and thereby show the range and scope of Education Inquiry in its first ten volumes. We have selected an article from each year of publication, separate from the ‘most cited’ or ‘most read’ lists that the publishers already highlight. This was a difficult selection to make from a pool of over three hundred excellent quality publications, and there are many more to be (re)discovered and highlighted from the 44 issues published so far.

Please enjoy the following articles selected by the editors. 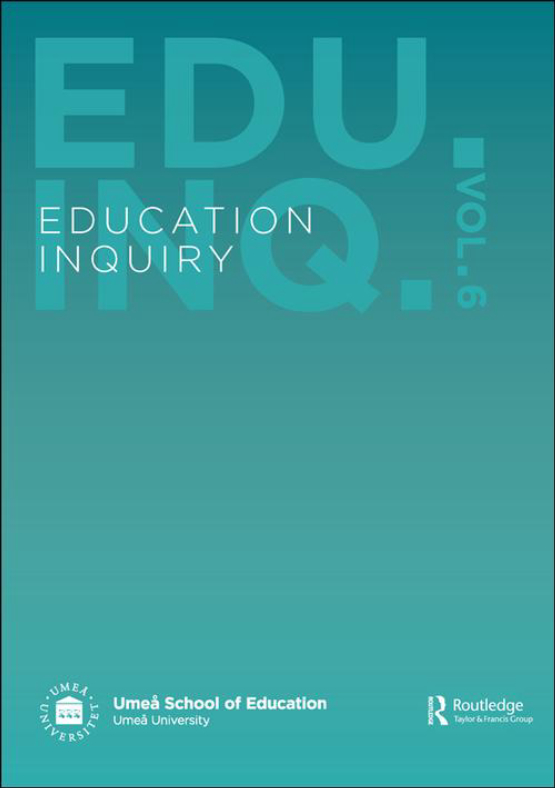 The establishment of Education Inquiry is intimately linked to the academisation and internationalisation of Swedish teacher education, and to the expansion of research and changing publication patterns of teacher educators.

The history of scientific journals is old. Already in 1665, two scientific journals were created: The Philosophical Transactions of the Royal Society in London and the Journal des Scavans in Paris. These journals brought about a revolution in communication between researchers and enabled them to connect their writing faster and in more detail than would have been possible with books alone. When Wilhelm von Humbolt (1767-1835) in 1810 founded the first research university, the Humboldt-Universität zu Berlin, it also marked a change from the medieval teaching practice, from orally transferring knowledge, to our contemporary understanding of universities as a place for written knowledge production, which is a key issue in this narrative.

After World War II, several Swedish state inquiries proposed an increased academization of Swedish TE, which among other reforms resulted in so-called Teacher Education colleges (Lärarhögskolor) that were set up outside the university structures in the 1950s and 1960s, and to which special professors were recruited. Teacher educators of that period had limited academic education, and their knowledge base emanated mainly from their experiences as good teachers, orally transferred. This also meant that their practice-based body of knowledge was acquired during a long teaching career, and was not transferred into journal articles for researchers and future generations of teacher educators.

In 1977 (H77), TE was incorporated into the Swedish University structures. The new requirements were that vocational education should not be based entirely on experience but should also draw on a scientific basis. This involved a transition from an oral culture of practice, to our contemporary understanding of universities as a place for written knowledge production.

In the early 2000s, the connection between undergraduate education and research was strengthened in Sweden (Proposition 1999/2000: 135). New and dual objectives were, for example, that the new and more comprehensive ‘degree projects’ should prepare future teachers both for development work in their future profession, but also qualify them for further research studies within the new research structures that were built up in teacher education (SOU 1999: 63). The teacher students were thus expected to formulate and define a problem that would then be empirically studied, analyzed and reported in writing, i.e. produce research and new knowledge. Also, the reform made it possible for TE to set up its own postgraduate education at the same time as research in the field progressed rapidly.

In 2000, I was appointed editor of Teacher Education and Research in Umeå. The journal received a new graphic form and name, also translated into English, as the Journal of Teacher Education and Research. In 2009 I took the initiative to transform the journal into an international, peer-reviewed, online publication. The idea was to connect the new journal to the established new graduate school in the field of educational science at Umeå University.

For that purpose, an international as well as a local board was set up. The idea was the members should meet once a year at our university, not only to set up the strategy for the journal and build a mutual interest for its development, but also to take part in the postgraduate school and its activities. At the same time, as the students got the opportunity to meet international researchers in the field of educational science, reading and producing international publications would be a permanent feature of the graduate school's activities. It was partly about de-dramatizing international publishing in a foreign language. In that sense Education Inquiry is connected to a changed and widened communication pattern, involving a transmission from oral to written transferring of knowledge within the field of Teacher Education.

Education Inquiry was conceived from the outset as an Open Access journal without any publication charges and the support of Umeå University and the School of Education was fundamental in realizing this mission. We feel very strongly that this model of publication is optimal for both scientific and ethical and political reasons. There is no doubt that open access publication contributes to the development of the discipline of education. With almost 250,000 downloads during 2020 the journal is read by researchers, students, teachers and policy makers interested in education issues across the globe. Even though of course this is a purely quantitative indicator, and we cannot possibly know the individual readers, disseminating research results in such numbers is a positive development for the scientific field and practitioners within. The last ten years of publications show deep engagement with ongoing and new research problems, with developing and new methodologies, and with contemporary public debates that affect all sectors of education, teachers and students across the world. The journal is read by more and more people, across several countries in six continents. We believe this is opening up important high-quality education research to audiences across the globe, free of charge to both authors and readers. The ethical dimensions of OA publishing are also significant. In a world where education is considered to be vital for the development of individuals and nations, Education Inquiry has increasingly high accessibility and visibility across the world, manifested in a widespread geography of submissions, as well as downloads of articles. See for instance, the 2020 the numbers of article downloads shown in the graph below:

Open access also presents us as Editors also with some challenges. The higher visibility of the journal has meant a huge increase in the number of submissions, with an approximate 10-fold increase in submissions over the last five years. This is of course a positive challenge, and is indicative of both a wider readership, and the increasing prominence of the journal amongst education research publications. It also means that we need to make hard decisions in our editorial work to guarantee the high quality of research reported in the journal.

Quality and the peer review process

The peer-review process Education Inquiry follows has been a fundamental cornerstone since its inception. This continues to be at the heart of our work as editors, and the most important mechanism for ensuring rigorous, scientifically-supported research of high quality. The journal has a policy of peer-reviewing all submissions, and the general policy is that after an initial editorial screening a paper is sent to at least two external reviewers. As editors we rely on the good will and expert professional assessment of our reviewers for the processing of new submissions.

It is also rewarding for us to take part in and facilitate the constructive dialogue between reviewers and texts, and a pleasure to read the final versions of articles that have gone through a rigorous but fair system of external review and assessment.

As an acknowledgement to our reviewers, we publish regularly an online ‘thank you’ note to all reviewers in an individual calendar year. We started this in 2013, and these ‘acknowledgement to reviewers’ papers can be found in the December issue of each volume.

It is important also to acknowledge the contribution of our Editorial board (link, https://www.tandfonline.com/action/journalInformation?show=editorialBoard&journalCode=zedu20) who regularly advise and review for the journal. Also, a note of big thanks to our publishers, past (CoAction publishing) and present: Taylor & Francis, who have facilitated a smooth and professional operation for the journal, and provided a platform for international dissemination and communication of our research studies.

We would like to reaffirm to our readers that we encourage submissions of original, and high-quality studies from a wide range of education research, and we are interested in research that crosses disciplinary and geographical boundaries. We are a broad scope journal, and we aim to be a forum for debate and advancement of education research in all its facets. You can read more about aims and scope: https://www.tandfonline.com/action/journalInformation?show=aimsScope&journalCode=zedu20

We look forward to reading more of your research, and of course we are always open to comments and suggestions for developing our work further in the next decade to come.