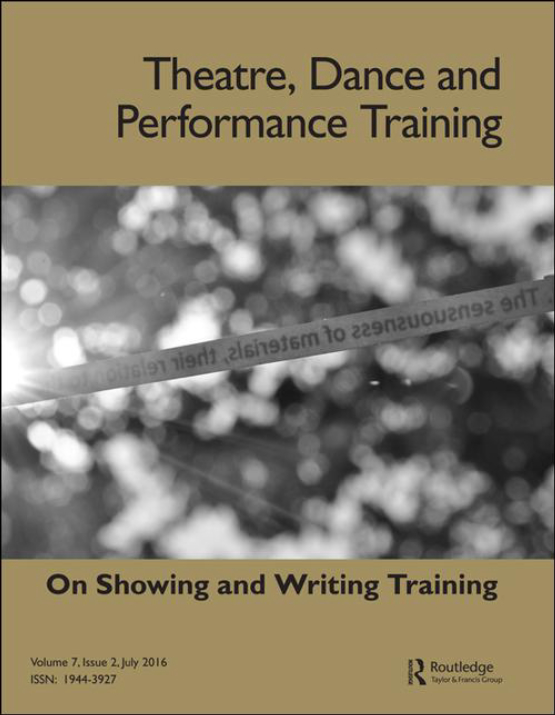 Conceived as a way of foregrounding the relevance of performance-based artistic practices in response to the current health crisis caused by the global pandemic, as well as a way of challenging neoliberal conceptions of creativity and performance as hallmarks of capitalist productivity, adaptability, and efficacy, this special issue will explore the relationship between performance training and the notion of well-being, broadly conceived, to reignite, reconfigure, revitalize, renew and/or reimagine their inter- and/or intra-action.

We seek contributions by performance and theatre studies scholar-practitioners, artists, educators, and activists committed to critically and reflexively investigating the cultural, social, political, ecological, and spiritual dimensions of performance training modalities that have the potential to promote, enhance, restore, and sustain the well-being of practitioners, audiences, and other/more-than-human participants and collaborators.

We are committed to integrating the perspectives of non-Western and Indigenous scholars and artists, and welcome contributions examining the ethical implications of conducting research on performance and well-being in the neoliberal academy, as well as decolonizing approaches to performance training that take into account the well-being of culturally diverse communities.

This special issue will therefore respond to the urgent need to acknowledge and to include multiple ways of knowing and being within Eurocentric paradigms that still inform dominant knowledge systems.

The contested term “well-being” is intended as a generative provocation. In this light, potential contributors are invited to engage with topics and questions such as:

Performance Training and Well-Being:
o What approaches to performance training and well-being are currently in the making?
o How do they depart from or extend dominant conceptualizations? Which performance contexts are they designed for?
o How is the relationship between performance training and well-being investigated beyond the studio, via Skype/Zoom, MOOCs and other interactive platforms in the global pandemic era?
o What is the impact of neoliberal economics on this relationship in the context of the current health crisis?

Intersectionality and Interdisciplinarity:
o How do performance training modalities that have the potential to promote, enhance, restore, and sustain well-being take into consideration gender, sexuality, ability, class, race and ethnicity?
o How do they respond to neurodiverse trainees?
o How are interdisciplinary performers, such as dance-theatre practitioners or intermedia artists, exploring the relationship between performance and well-being?
o How has training that was originally developed to foster well-being within the context of artistic performance been adapted by qualitative researchers and educators for the purpose of arts-based inquiry, pedagogy, activism, community or health work?

Documentation and Dissemination:
o Which practices of performance training that value and promote well-being have not been systematically documented and disseminated?
o Which non-Anglophone practices have received less critical attention and how can new translations or archives engage us in dialogue with them?
o What is the place of documentation in practice-as-research approaches to performance pedagogy and well-being?

Re-newing Performance Training:
o How can existing systems, exercises and practices be reconfigured in ways that value and foster well-being?
o How can we re-evaluate the foundational premises of performance training through current interdisciplinary research on the relationship between artistic practice and well-being? What are the implications for transmission processes and how might a focus on well-being inform pedagogical innovations?

To signal your interest and intention to make a contribution to this special issue please contact Virginie Magnat ([email protected]) and Nathalie Gauthard ([email protected]) for an initial exchange of ideas/thoughts or email us an abstract or proposal (max 300 words). Please consider the range of possibilities available within TDPT: Essays and Sources up to 6500 words; photo essays; shorter, more speculative, essays up to 3000 words and postcards (up to 200 words). All contributors could extend their work through links to blog materials (including, for example, film footage or interviews). Questions about purely digital propositions can be sent directly to James McLaughlin at [email protected] along with ideas for the blog. Firm proposals across all areas must be received by 1st March 2021 at the latest. We look forward to hearing from you. (http://theatredanceperformancetraining.org/2020/11/call-for-papers-tpdt-13-2-special-issue-on-performance-training-and-well-being/)

Enjoying #BEAvegas? Take a look at our virtual bookstall to purchase discounted books on #broadcasting #media and #filmproduction here: https://t.co/SCSEnlK5oV

Read more
0
0
6 hours ago
There are many factors that impact the workings of #DanceInstitutions 💃🏽 This special issue explores institutional location and economic context of dance practices...

Read more
0
0
11 hours ago
RT @profmargboyle: TOMORROW! So glad to celebrate the volume and chat more about María de Zayas.