Submit a Manuscript to the Journal
Technical Communication Quarterly

For a Special Issue on
Critical Approaches to Climate Justice, Technology, and Technical Communication 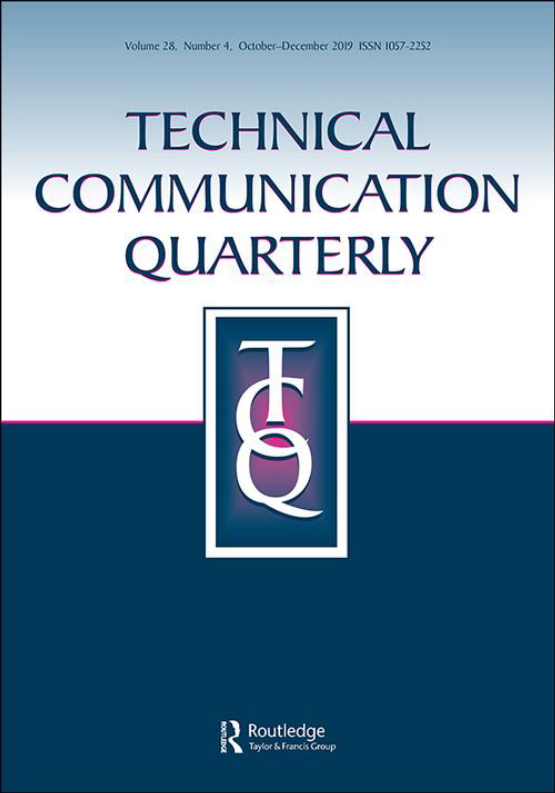 This special issue of Technical Communication Quarterly will highlight the work of technical communicators working on climate justice initiatives across the Majority World. By Majority World, we refer not to a specific geography but to the conditions in which most of humanity lives: lacking economic, social, or political agency and absent adequate institutional access to critical infrastructures for food, housing, transportation, and communications. Such spaces of marginalization are often associated with Asian, African, and South American regions that traditionally have been classified as “developing,” “low- or middle-income,” or “the Global South.” Yet marginalization also occurs in and climate justice also matters for regions of the United States such as rural Appalachia and urban Detroit. Therefore, we have chosen the term "Majority World" in lieu of deficit-oriented terms to acknowledge the fact that marginalization occurs across geographies and also to invite submissions that engage with efforts to improve access to human rights for marginalized communities regardless of their geographical location.

Access to safe work, shelter, food, and environmental health are universal and fundamental human rights. Yet, the enjoyment of these rights by the Majority World is inequitable (Boyd, 2021). As the title of this special issue suggests, we are interested in the ways that technical communicators are engaging in the research, teaching, and scholarship of climate justice, as well as the activist work they may be doing on their campuses, in their local communities, and with their students.

In responding to both the urgency of climate change and the need for inclusive solutions, we have broadened the kinds of research we will accept for review and would like to solicit “flash” scholarship: short case studies of 2-3 pages that can document works-in-progress, front-line narratives [e.g. observations from a pipeline demonstration in Appalachia], rhetorical analyses [e.g. “greenwashing” fashion], or interviews with high-profile influential environmental communicators and change agents [e.g. Malaika Vaz, David Ore, Greta Thornberg, Hans Cosmas Ngoteya]. We consider such flash scholarship as an opportunity especially suited to early-career and emerging scholars; those at predominately teaching institutions; and global scholars who may be researching under significant financial burden or geographical, technical, or political constraint.

We are equally interested in traditional scholarly articles and especially encourage submissions based on applied field work, transformational pedagogical practice, usability/participatory design studies of green-tech, and community-engaged research. Our call is intended for scholars and teachers with clear and overt commitments to improving climate justice outcomes. In brief, we are looking for narratives based on research, teaching, and practice that will inspire, demonstrate, and help us define–perhaps even reimagine–the ways in which technical communicators and technical communication meaningfully contribute toward understanding and achieving climate justice in, by, and for the Majority World.

Current evidence suggests that a sixth major extinction of global biological diversity is underway (Díaz et al., 2019; Monroe, Butchart, Mooers, & Bokma, 2019). The Earth is losing between one and ten percent of its biodiversity per decade, mostly due to land-use/change-induced habitat loss; pollution; over-harvesting; and diseases related to human population growth, production and overconsumption (United Nations Environmental Programme, 2019). Since species are linked to ecosystems, as one species goes extinct, other species with which they interact are likely to also go extinct.

The interdependence of species has severe implications for humans generally, but the human impact of biodiversity loss will be greatest for Majority World peoples who enjoy minimal access to resources but have historically contributed less than the minority world per capita and, in the aggregate, to climate change (Costello et al., 2009). Despite making lower contributions to climate change and its adverse effects than their minority world counterparts, Majority World peoples remain historically absent or underrepresented in decision making activities that significantly impact the earth’s climate and their ability to adapt to those changes. For instance, the historic marginalization of women and Black and Indigenous people of color (BIPOC) has had significant impacts on access to land, credit, agricultural extension services, and, importantly, technology that can aid in adaptations. Such institutionalized discrimination means that women, BIPOC, and low-income communities are often less involved in food system planning, policy and decision-making, and technology design despite overwhelming evidence that when they are included in these conversations, outcomes are more just and lasting, and technological interventions are more effective and useful (Ban et al., 2018; United Nations Food and Agriculture, 2011).

The guest editors invite contributions from scholars at various levels of their careers, but we are especially interested in contributions from multiply marginalized or underrepresented (MMU) scholars, early-career scholars, graduate students, and practitioners working for climate justice.

These are some of the topics we hope to see covered in your proposals:

More information, including references and further reading, can be found here.

Please submit proposals of no more than 500 words describing your proposed article or flash scholarship as well as the CVs or resumes of contributing authors to [email protected]. We welcome queries; please email us at [email protected] with any questions or to request a meeting to discuss your proposal idea.