Submit a Manuscript to the Journal
Studies in Art Education

For a Special Issue on
Antiracist Strategies and Intervention 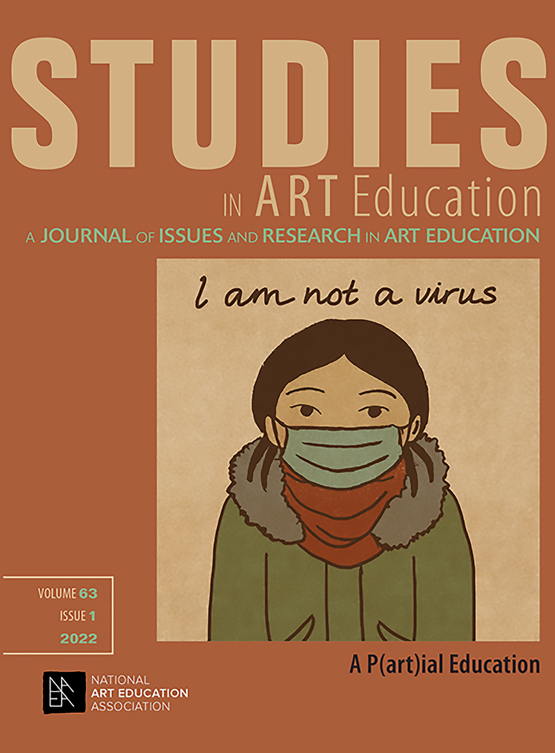 Racism has always been systemic in its practice and targeted in its attacks. Racism is not manifested solely as a severe relational bias or social animus, nor can it be dismissed either as unrelated and individual acts of bigotry, or as commonplace conflicts between competing social groups; racism is a virulent system of debasing beliefs, legalized injustices, and discriminatory social constructs designed to advantage one group over another. Historical race-based exclusionary practices have worked to produce racist perspectives, practitioners, and apologists to further normalize those practices. The Transatlantic slave trade, an institution that accelerated a deadly array of inequitable outcomes, was practiced for centuries as a system for stocking both the wealth of traffickers, the property of individual slaveowners, and the capital resources of so-called Western empires alike. By extension, the racist ideologies and rationalized belligerence that produced a centuries-long slave trade, Jim Crow segregation, and an array of apartheid and Eurocentric race-based caste societies across the globe were also wealth-building social practices designed to systematically deny access to that wealth and privilege by those ostracized as unworthy or irredeemable.

In other words, racism is a complex machinery for seizing capital resources, amassing power, and maintaining the consequently constructed inequities as the status quo. A systems theory perspective offered by experts like Donella H. Meadows (2008) recognizes that one of the defining characteristics of any system is both its resistance to change and its DNA for reproducing or replicating itself.

There is also a stark visuality to racism. In his comprehensive documentation of the history of Eurocentric imagery, Jan Nederveen Pieterse (1990) excavates and exposes “whiteness” as constituted within Western visual culture as a complex machinery of fictions, fantasy, and fear designed to fashion the raw material of intercultural encounters into an iconography of dominant group hierarchy—categorizing all persons of color or divergent identities not only as lesser human beings (Rolling, 2009), but as threats to Eurocentric narratives and norms. Historically, transgressing against this strictly enforced social coding or its semiotics of subjugation can get a violator killed just for looking “suspicious,” or simply arousing either desire or fear. After the torture and murder of George Floyd was captured on cell phone camera and broadcast on TV in the middle of the global COVID-19 outbreak of 2020, a paroxysm of street protests against police brutality followed almost immediately, comprising all ethnicities and age groups as they spread from U.S. city to city and then across the world. Perhaps this occured because the ever-present danger of the lurking pandemic had taught us all to empathize as never before with what it feels like to be exposed, vulnerable, and preyed upon every day. However, because racism is systemic, its backlash against the public outcry that all Black lives matter was swift, manifested in the current ideological furor being whipped up against critical race theory and any study or mention of the long-term effects of racism. As of this writing, children’s books telling the true stories of lives that mattered are being targeted for elimination from public school library shelves in 2022.

However, the full scope of antiracism work cannot be conflated with or limited to critical race theorizing. Historically, antiracism has abolitionist origins predating by centuries the initial work of critical race theory legal scholars, who first emerged in the 1970s. Antislavery activism was succeeded by antisegregation and anti-apartheid activism, which has in turn been succeeded by the antiracist activism we are witnessing today. Moreover, antiracism is presently a constellation of practices allied against anti-Black, anti-Indigenous, anti-Asian, and anti-Latinx racism, as well as other forms of anti–ethnic group discrimination and social identity bias. Each antiracist strategy and intervention, by definition, is purposed to counter and dismantle various systemic prejudicial practices and the deeply embedded power structures that sustain them—from neocolonialism and the Western supremacist propaganda it still generates, to disenfranchising apartheid practices both at home and abroad, to redlined neighborhoods established to deny persons of color and other stereotyped out-group identities equal access to employment opportunity, benefits, community services, and generational wealth.

This special issue of Studies in Art Education is intended to marshal scholarship investigating the precedents and potential for the arts and art + design education in their contribution to antiracist social practice. Drawing upon the language in this call for papers, we invite manuscripts examining:
•The history of the arts as antiracist activism and social practice (Lampert, 2013)
• Frameworks for arts praxis as a catalyst for equity (Kraehe, 2017)
•The arts and creative problem solving as a generator of new and better paradigms for living
(Rolling, 2020a)
•How race operates in and through the arts in education (Kraehe et al., 2018)
•Antiracist strategies and interventions for dismantling the systemic machinery of racism or its social constructs (Rolling, 2020b, 2020c)
•Art as social response and responsibility (Rolling, 2013)
•Art as the fundamental human right to signify self and render meaning from lived experience (Rolling, 2011)
•How a semiotics of resistance or reinterpreted and anomalous identity has been either been insinuated to disrupt the otherizing frameworks of Eurocentric visual culture, or positioned to exert an influence and construct new social paradigms that are independent of Western norms and models (Rolling, 2004)
•Artmaking as self-representation, and/or culturally responsive art + design education as a counternarrative to the stigma of racist stereotypes and archetypes (Rolling & Bey, 2016)

The International Journal of Art Therapy welcomes your research for a special issue which seeks to advance our understanding of how art therapy can help adults and childr...

Read more
1
1
7 hours ago
Art Therapy welcomes your research for a special issue which seeks to examine how art therapists have worked with individuals, groups, agencies, institutions, and communi...