Submit a Manuscript to the Journal
Pedagogy, Culture & Society

For a Special Issue on
‘A time to reconfigure, repurpose and bewilder ‘the pioneers’, ‘pioneering philosophies’ and ‘pioneering practices’ of early childhood 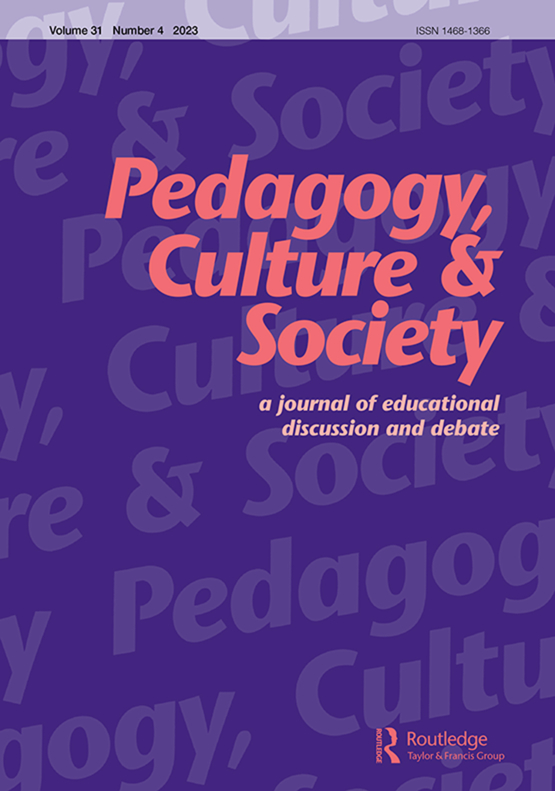 ‘A time to reconfigure, repurpose and bewilder ‘the pioneers’, ‘pioneering philosophies’ and ‘pioneering practices’ of early childhood

Familiarity with ‘the pioneers’ of early childhood is deemed essential knowledge for anyone seeking to understand how contemporary conceptualisations of child/hood have come about, how children are positioned in relation to adults, and how ideas circulate about the ways children behave, learn, interact and find their place in the world. We place ‘(the) pioneer(s)’ in inverted commas precisely because the concept of pioneering is contested and deeply problematic. This Special Issue is committed to critically considering precisely what ‘pioneer’ means in the context of early childhood. Inspired by Snaza’s (2013) proposition to bewilder ‘the pioneers’, we anticipate that this Special Issue will pursue ideas about early childhood that are not shaped by, and founded upon Western imaginaries of child/hood/s. Bewildering is a concept and practice that actively disrupts the colonial connotations and implications of ‘the pioneer’, as a civilising force heading into the wilderness, to prepare the way for the production of certain sorts of humans.

Early childhood ‘pioneers’ are firmly embedded in educator initial education, in professional development, and in pedagogical work with young children, all of which is informed by extensive academic and professional bodies of literature. Although there is a long, diverse, and often unaccounted for, range of philosophies and pedagogies that inform Early Childhood Education and Care (ECEC), most often an encyclopaedic approach to presenting ‘pioneer’ legacies is taken with a narrow emphasis on White, continental, (mostly male) figures from previous centuries. Accounts about prominent early childhood thinkers tend to dwell on their personal histories, philosophies, pedagogies and legacies - often with a reverential tone.

Attempts to make the ideas of these ‘pioneers’ accessible often results in reductive and uncritical accounts that are preoccupied with fidelity to the specific pedagogical approach, which in turn, silences critical engagements. As Wong (2013) asserts:

‘A critical and respectful understanding of the history of ECEC enables contemporary advocates to place themselves within a long, hard-fought…though often controversial tradition.’ (p. 311)

‘The pioneers’ are not only a powerful force in ECEC contexts, their ubiquity reaches beyond classrooms and lecture halls, to the kitchen tables of families trying to make sense of nursery prospectuses; association with one of ‘the pioneers’ can radically alter the inflection of what ECEC symbolises, and hence the expectations that are held about ‘quality’, ‘authenticity’, ‘nature’, ‘development’ and its relationship to childhood. Aspects of ‘the pioneer’ pedagogies, spatial organisation, and use of particular materials have become highly commercialised, as evident in the growth of merchandising and coverage on the social media platforms Pinterest and Instagram. The McDonaldization (Ritzer, 2011) of ‘the pioneers’ is now an on-going concern in globalised capitalist market economies where what they come to symbolise - aesthetically, culturally, materially - is recognised as a unique selling point, of particular appeal to particular demographic groups (Albin-Clark, 2022; Mohandas, 2022; Osgood & Mohandas, 2020,2021, 2022).

This Special Issue will critically interrogate the ways in which ‘the pioneers’ have come to occupy unrivalled space in educational contexts and the public imagination, globally. What are the ramifications of this? How does a preoccupation with ‘the pioneers’ work to marginalise, silence and invisibilise other ways in which childhood is articulated and practised? As stated by Johnson (2000, p.75): ‘early childhood education is in desperate need of ‘rereading our own canonical texts’ revisioning, rethinking, re-theorizing, much of what we are/are not as a discipline.’

Troubling ‘the pioneers’ offers vital opportunities for reflection and the creation of space to engage with a broader range of legacies that can be found in multiple contexts, across time space, and place that have profoundly shaped (alternative) ways to imagine child/hood/s.

This Special Issue invites contributions that reconfigure the work of ‘the pioneers’ and further, that radically disrupt ideas about who or what can be ‘a pioneer’, in relation to precisely what sort of ‘pioneering philosophies’ and ‘pioneering practices’. Contributors are invited to reach beyond faithfulness to ‘pioneer pedagogies’ and instead explore myriad alternative worldviews, philosophies and practices that actively work on the affirmation, maintenance and development of other ways to imagine childhood. As this quote from Revd Caleb Sangoya, Elder in Pirurvik Preschool2 so powerfully stresses:

‘I can say, as Inuit, our lives, our culture, we have to believe it and use it. We can’t look at other people’s lives and try to copy them. We can’t pretend to be from somewhere else. We lose ourselves when we try to use other ways. We need to use our Inuit culture, to keep it, hold it.’ (Building the Heart of a Child, Vimeo, 2021)

Following this insistence, the Special Issue aligns with Herbert’s (2013, p. 300) assertion that:

‘Viewing the expectations of contemporary early years education against the backdrop of past realities serves to highlight the way in which education sets the scene for the cultural destruction and dispossession that has, in too many parts of the world, been the long-term outcome of education for Indigenous peoples. Examining the themes and forms of discourse that have informed the theorising and practice underpinning the development of concepts around social justice demonstrates the importance of addressing diversity in early years education contexts’.

We propose that critical reflection, reconfiguring and bewildering create important possibilities for contributors to unsettle the dominance of EuroWestern knowledges about child/hood, pedagogy, nature/culture and human/non-human (Nxumalo and Cedillo, 2017). Furthermore, reworking philosophies offered by ‘the pioneers’ can act as a form of subversion and resistance to dominant, policy-determined approaches to early childhood (Archer, 2021; Archer and Albin-Clark, 2022). We suggest that inspiration might be found in approaches to early childhood education in the global south, particularly from Indigenous and non-Western philosophies and practices. This Special Issue makes space for the very concept ‘pioneer’ to be challenged, rethought, and placed under critical interrogation which is a vital exercise in the pursuit of decolonising Early Childhood Education discourses and material practices

The Special Issue seeks expansive readings and creative, experimental pieces that are framed by (some or all) of the following considerations:

Dr Nathan Archer is Director of the International Montessori Institute in the Carnegie School of Education at Leeds Beckett University.

Sid Mohandas is a doctoral candidate at Middlesex University. They are a former early childhood practitioner and teacher trainer, and the founder of The Male Montessorian (TMM) and the Montistory platforms.

Abstract submissions should be sent directly to [email protected] Author queries should also be sent to the Guest Editors.

To begin, we seek extended abstracts of around 1,000 words (plus references) by 30th January 2023. Proposals will be assessed on the basis of how they crystallise the key arguments of the proposed submission and map out how its aims will be achieved. Accepted proposals will be those that directly engage with the criteria we outline in the rationale and respond to the provocations presented throughout the call. As well as more conventional academic manuscripts, we welcome artistic submissions, which would typically comprise visual artwork with a 3,000 word essay.

Abstracts of 1,000 words are expected for all initial submissions that sets out explicitly how the submission will address the aims of the Special Issue.

Invitations for full submissions will be sent to selected authors/artists by 10th February 2023. Complete draft manuscripts should be a maximum of 9,000 words (including references); artistic submissions (artwork, 3,000 word essay including references) are due by 15th May 2023 and should be submitted via ScholarOne Platform. The working language of the collection is English, as is the refereeing and editing process. Consult Pedagogy, Culture & Society guidelines for manuscript preparation

If your submission is accepted for review you will be invited to:

Final acceptance of a submission is conditional upon peer review assessments and the decision of the Guest Editors and Journal Editors. We anticipate the Special Issue will be published in June 2024 with accepted articles published online in advance as ready.