Submit a Manuscript to the Journal
Peace Review 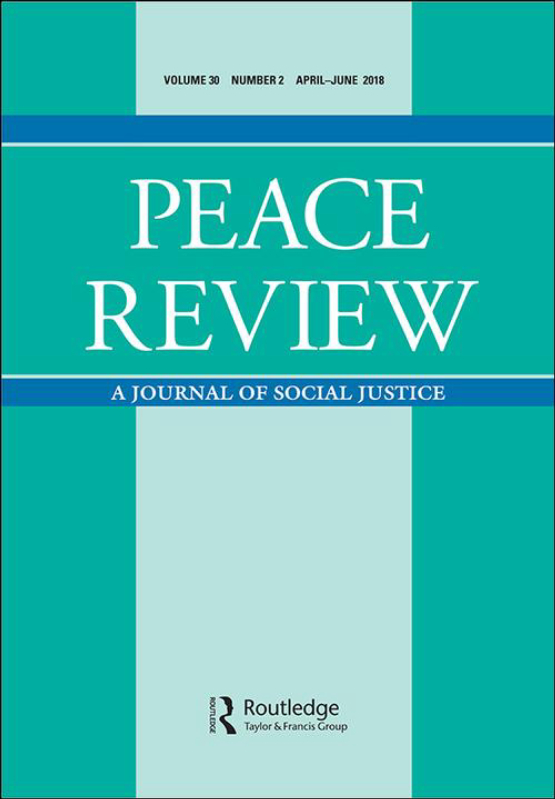 Under the guest editorship of Dr. Lena Tan, Senior Lecturer in Politics and International Relations at the University of Otago, Peace Review: A Journal of Social Justice 35 (03) invites essays for a special issue on Northern Ireland and the Good Friday Agreement.

Next year marks the 25th anniversary of the Belfast/Good Friday Agreement of 1998.  Since its signing, Northern Ireland has enjoyed a period of relative peace, and become an example of how seemingly intractable and violent conflicts can be resolved. For some, however, this is a brittle or negative peace and, Northern Ireland, a precarious post-conflict territory.  While doubts regarding the future of the Agreement arising from the Brexit negotiations and the street violence that erupted in 2021 are recent and loud indicators of its challenges, the cultural wars and continuing divisions between the Unionists and the Republicans, and the periods of governmental paralysis over the last two and a half decades underline that the peace-making process in Northern Ireland has long been problematic. In this special issue of Peace Review, we invite submissions that explore and examine the many afterlives of the Belfast/Good Friday Agreement from the scholarly community as well as practitioners and activists.  In particular, we welcome theoretical, empirical and topical contributions that reflect on how and why the Agreement, while delivering relief from direct violence, is still a long way from engendering a transformative peace.

General themes that contributors can address in their essays include, but are not limited to, the following:

Essays keen to be considered for inclusion in this special edition should be uploaded to the Peace Review Portal on the Taylor and Francis Peace Review Journal website no later than April 15, 2023.

Essays keen to be considered for inclusion in this special edition should be uploaded to the Peace Review Journal website no later than April 15, 2023.

Articles should be submitted via the journal online portal and utilize the Taylor & Francis Citation style and Journal WORD Template.

Read more
0
1
3 days ago
Just over a week since Germany announced they'll send tanks to Ukraine, what have other countries offered? 🇩🇪 Analysis by @ALanoszka and @JordanMBecker looks into ...

Read more
6
9
4 days ago
Is a career in academic right for me? Two leading Routledge authors, Vicki L. Baker and Elizabeth L. Campbell, explore this question in our new webinar! Watch the webinar...