Submit a Manuscript to the Journal
Public Art Dialogue

For a Special Issue on
Outside Voices: Art, Visibility, and the Gender of Public Speech 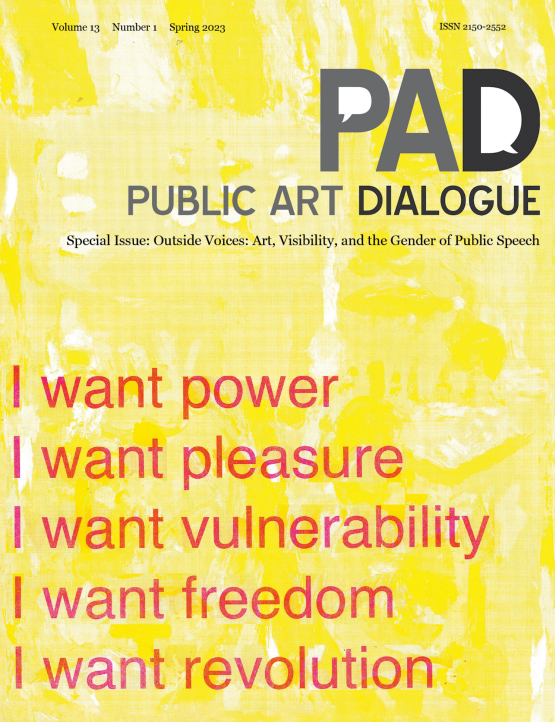 Outside Voices: Art, Visibility, and the Gender of Public Speech

Whether with text, voice, or written inscription, modern and contemporary art has a rich (if not fully acknowledged) tradition of incorporating language and speech. Often, this choice has a political point, and recently scholars have charted how artists aligned with feminism have drawn on that tradition to craft arguments that reveal and intervene in the gender asymmetries of global visual culture. Artwork by Barbara Kruger, Lorna Simpson, and Jenny Holzer, to take just a few U.S.-based examples, can be considered part of the effort to challenge the suppression of women’s voices in public discourse. As Mary Beard argues in Women and Power: A Manifesto (2017), this public suppression and silencing is a crucial factor in the west’s long history of gender inequity, and it therefore plays a significant, though perhaps quiet, role in the colonial and imperial hierarchies of race and sexuality. “Outside Voices” considers how artists have made language into a material capable of speaking to the inequities of the public sphere and explores how the gendered subtexts of language and speech figure into them. We are particularly interested in scholarship and artwork that explores or stages ‘dialogues’ between language and the codes of visibility and recognition upon which global visual culture relies. For example, how does the visibility of embodiment that has been historically attached to women as well as queer, non-gender conforming, and racialized subjects impede access to public discourse and all the politically valued visibility it implies? What does text-based public artwork have to tell us about the limitations and possibilities of speaking “outside” historical forces that insist on silence? We are also interested in scholarship and artwork that pay attention to social media as a visual and textual arena in which one can interrupt, confirm, oppose, or exacerbate public habits of symbolic domination that manifest through spoken and written language.

The International Journal of Art Therapy welcomes your research for a special issue which seeks to advance our understanding of how art therapy can help adults and childr...

Read more
1
1
15 hours ago
Art Therapy welcomes your research for a special issue which seeks to examine how art therapists have worked with individuals, groups, agencies, institutions, and communi...