Submit a Manuscript to the Journal
International Public Management Journal

For a Special Issue on
Outcomes-based Contracting and Public Management Reform: Lessons from a decade of experimentation 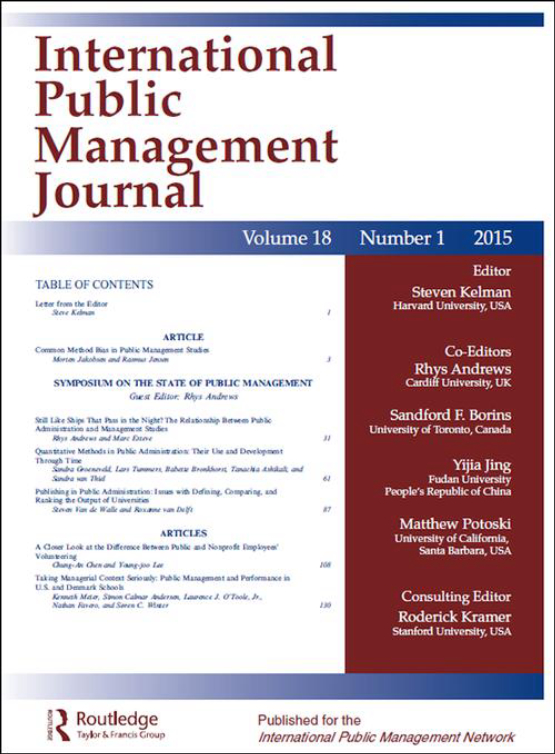 Outcomes-based Contracting and Public Management Reform: Lessons from a decade of experimentation

Outcomes based contracting (OBC) and social impact bonds (SIBs) offer a window to explore a set of public policy and management innovations increasingly adopted in Western Europe, North America and in emerging economies. Introduced in their modern forms in 2010, OBC and SIBs are tools which prioritise (1) a shift to an outcomes-focus and (2) increased and sometimes novel inter-sectoral relationships between government, non-profit and for-profit organisations in the provision of public services. A decade after the launch of the first SIB at Peterborough Prison, this special issue invites contributions which catalogue and investigate what has been learned about OBC in the interim.

Outcomes based contracting (US) or commissioning (UK) is a catch-all term for inter-organisational accountability regimes which use incentives to alter individual and organisational behaviour. The use of such schemes has been the subject of long-term scrutiny in public administration literature: systematic reviews of pay-for-performance, performance-based contracting, and payment-by-results consistently show that there are “significant costs and capacity demands for developing and implementing accurate and reliable performance measures and performance‐based contracts that align diverse public and private interests and reflect the complicated nature and ‘technology’ of public programs” (Heinrich & Kabourek, 2019, p. 869 referencing Heinrich & Marschke, 2010). These costs and complexities, in turn, have led OBC arrangements to pursue simpler measurement and accountability schemes, including incomplete and shorter-term impact goals. Time and time again, these shorter-term output and activity measures have been shown to be very loosely or negatively correlated with the long-term goals program outcomes (Barnow, 2000; Heckman, Heinrich & Smith, 2002; Heinrich & Marschke, 2010).

Social Impact Bonds (SIBs) are an important development in public policy and management over the past decade. At the vanguard of attempts to further the OBC approach into the design and delivery of public services (Edmiston & Nicholls, 2017), SIBs are essentially investment-backed pay-for-performance schemes in which private investors cover the up-front costs of service delivery in order to make a return through the payment of predefined social outcomes. In Western Europe and North America, government has most often been the payor of social outcomes. In emerging economies, this role is more frequently filled by governments and NGOs alike.

SIBs have been enthusiastically pursued by successive UK administrations since 2010 as a ‘win-win-win’ policy tool in that they promise better outcomes for service users, cost savings to government and a return to investors (Fraser et al, 2018a). However, practitioner and academic narratives on OBC and SIBs are multifaceted. In SIB-financed projects significant control over service delivery is frequently ceded to intermediary organisations alongside an increased emphasis on performance management often leading to inter-organisational turbulence (Warner 2013; Cooper et al. 2016; Berndt & Wirth 2018; Lowe et al, 2019; Economy, forthcoming). Some scholars, meanwhile, highlight SIBs’ ability to lessen some of the harsher edges of managerialism as they shift the focus from process to outcomes measurement while protecting service providers from the risk of underperformance by using social investment to cover upfront service delivery costs (Le Pendeven, 2019; Fox & Albertson, 2011; 2012). Whilst this view is contested, it has been argued that such a shift might be seen as providing service delivery staff with greater discretion to flexibly meet client needs and better align the goals of all stakeholders, and thus satisfying the governance requirements of all parties involved (Joy & Shields, 2013). SIBs, viewed through a governance lens, may be interpreted as a variant of a public‒private partnership, in that they promote long-term collaboration between public, private and non-profit actors, for example through longer contracts and contractual alliances (Teicher et al. 2006), and sometimes include anti-market elements such as the suspension of competitive procurement processes (Neyland 2018; Fraser et al 2019).

This collaborative rationale is prevalent in many pro-SIB and OBC narratives which position them as representing a shift to “neo-corporatist values” (Osborne 2010) in the commissioning of public services – suggesting that these approaches encourage collective co-design of complex service user pathways and sustained inter-organisational commitments rather than short-term competitive contracting (Fraser et al. 2018b). Thus, by promoting upfront collaboration between key actors OBC and SIBs may challenge a) the competitive logic which has become prevalent in the commissioning of public services; b) traditional responses to policy problems by establishing new coalitions and networks of actors; and in doing so challenge c) the market logic of free and fair competition in public tender processes.

Contributions to the Special Issue

Exploring measurement, management, and structural diversity in OBC and SIBs offers an opportunity to interrogate both the approaches themselves as well as the ideologies and practicalities behind the public management reforms which illuminate them.

Specifically, we call for contributions – theoretical and empirical – which speak to:

A 1,500-word summary of your original article is due to guest editors by 10 May 2021 11:59pm BST for an initial screening of topics. Authors will be informed within three weeks if their article has been selected for full submission. Authors who are selected to submit full manuscripts will also be invited to participate in a related symposium at the 2021 Social Outcomes Conference. Hosted at the University of Oxford on 9-10 September 2021, the symposium gives authors the opportunity to share and discuss nearly final versions of their articles. Attendance at the conference is not mandatory for inclusion in the special issue. The deadline for full manuscript submission to IPMJ is 30 September 2021.

Read more
0
0
15 hours ago
Join the conversation for a special issue of Industry and Innovation: Corporate Startup Collaborations in an Age of Disruption: Looking beyond the Dyad. Learn more and ...

Read more
1
0
16 hours ago
Have questions about ethics standards you need to follow before publication? Our How Researchers Changed the World learning programs cover all you need to know before you...