Submit a Manuscript to the Journal
Research in Drama Education: The Journal of Applied Theatre and Performance

For a Special Issue on
Oral History Performance, Listening and Transitional Justice 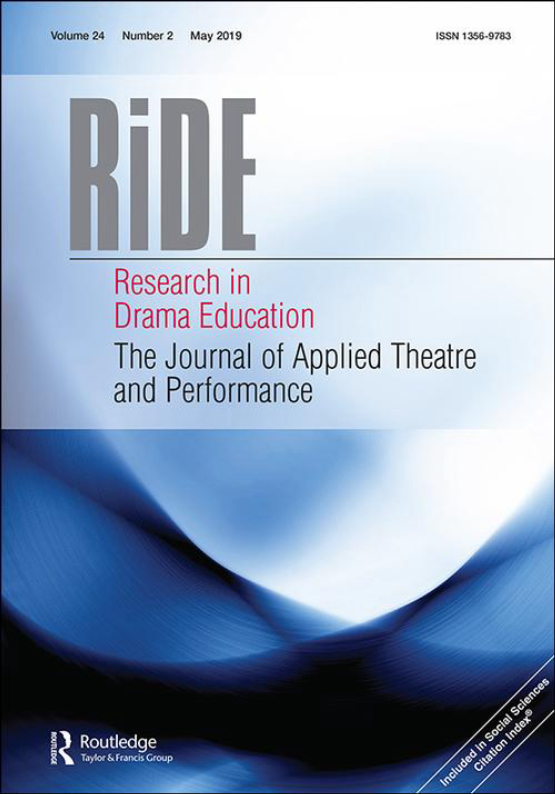 Transitional justice refers to Truth Commissions, War Tribunals, and other accountability mechanisms set up in countries emerging from periods of large-scale violent conflict as a way to redress "human rights violations so numerous and so serious that the normal justice system will not be able to provide an adequate response". (ICTJ, no date) However, such state-sponsored mechanisms are not the only sites where a community impacted by violence may come to terms with what happened. Theatre and performance are also believed to be transformative means to deal with the legacies and memories of the past and enact a different present or future. Not surprisingly, during the last three decades, they have been used by cultural workers and artists worldwide to engage participants in 'paralegal' processes, that is, processes that are "supplementary to and interrogative of the trope of the trial in human rights and transitional justice culture" (Rae, 2009:42).

Theatre and performance practitioners working with narratives by people impacted by political violence in transitional justice scenarios are faced with a fundamental challenge: how to ethically and aesthetically mediate a social process in which a group of people share their painful experiences and others (a public) listen to them in the context of a performance or a workshop? Listening, in the context of such a creative process, comes centre stage. Listening is a crucial driver of transitional processes, both actual and artistic. (Sotelo Castro, 2019 and 2020, Borneman 2002, Aranguren 2017, Jelin 2007) Increasingly, creative teams are using oral history and other interviewing techniques to collaborate with participants and record their narratives as part of a research and creation process. Curated fragments of the recorded stories may later be delivered verbatim by performers or, at times, by the interviewees themselves. Other approaches to performing oral histories include Theatre of the Oppressed and Playback Theatre. Oral history, thus, “does not solely belong to historians or to a particular paradigm” (Field, 2008). We embrace here an interdisciplinary understanding of oral history that positions creative and production teams, performers and audiences alike as listeners and witnesses of performances in which narratives told in the context of an interview are told again (Pollock, 1990) for an audience. At stake in such work are unresolved, often very complex social questions put forward by living people around justice and injustice, abuse of power, human rights violations, truth, needs of redress and healing, shattered trust, but also hope, community and peace-building.

The literature that has emerged over the last two decades uses memory, voice, storytelling, healing, trauma, affects, emotions, care, peace-building, post-conflict, redress, and conflict transformation to advance ideas on what such work does or fails to achieve. Building on the work of scholars including Cohen 2020, Cohen, Varea and Walker 2011; Fisher 2020, Thompson 2011, Ramírez Barat 2014, Cole 2014, Siddiqui and Joffre-Eichhorn 2014, Barnes and Coetzee 2014, Rush and Simić 2014, and Vellina and Waisvisz, 2013, this issue invites contributions specifically focused on how oral history performance, listening studies, and transitional justice theory and practice intersect in the context of this field of practice. As Catherine Cole (2010) has claimed in Performing South Africa's Truth Commission: Stages of Transition, it is the process of hearing the stories in the first person by direct witnesses that gives some sense of individuation and humanity to narratives that are hard to believe.

While related issues and questions are also welcome, we invite research papers and other contributions including digital documentations, audio or photo essays, and field notes that consider:

Please send initial proposals of approximately 300 words by October 31st , 2021 to the issue guest editor: Dr. Luis C. Sotelo Castro ([email protected]) for consideration and feedback. Full articles will be due May 20th, 2022 (please note, full articles will undergo anonymous peer review prior to final acceptance). Final publication for volume 28, issue 1 is expected to be February 2023.

RT @Dr_Finn_: Was just asked what my favourite paper on Belonging in HE is and thought I'd share more widely as it's a real gem. https://t…

9
0
about 1 hour ago
RT @NathanArcher1: 'There is a moral and ethical duty to address the issues of education, qualifications, retention and remuneration of ear…

40
0
2 hours ago
RT @SocioDictionary: "Educational Policies and the Gender Gap in Test Scores: A Cross-country Analysis" by Hermann and Kopasz in Research P…

7
0
3 hours ago
Submit your research to a special issue of the Journal of Educational Administration and History, focusing on the phenomenon of ‘grassroots’ community organising for ...