For a Special Issue on
Making low-carbon places 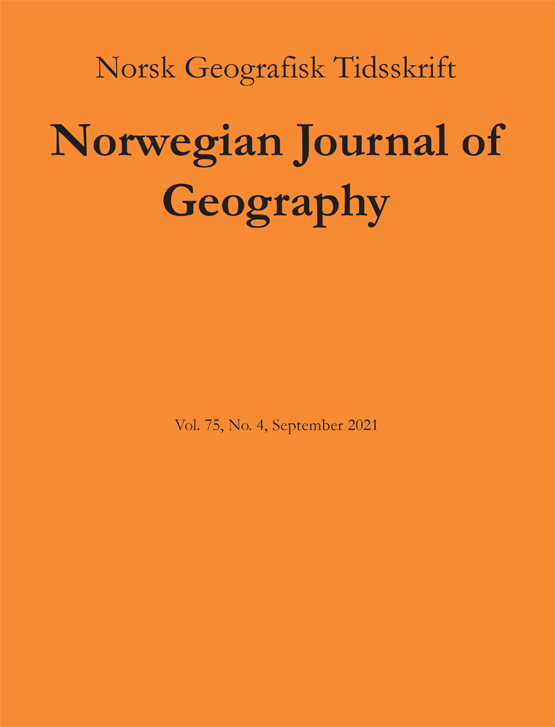 How are low-carbon places (to be) made? In this special issue of the Norwegian Journal of Geography, we invite submissions that place emphasis on a combination of three key terms: making, low-carbon, and places.

Making: Relational analyses in urban studies have enabled advances in our understanding of urban places, such as enhanced awareness of their metabolisms and development, alongside contestation over what they have become and are becoming. These insights are crucial to understand how places are made and thus offer avenues for how they may be made differently. We are interested in the processual nature of how change is enacted and takes effect, and in how the content of what constitutes urban and rural development is assembled. Our interest in change leans towards the future tense: not just what places have become or are becoming but also what they may become. In this realm of places yet to come, we may encounter speculative fictions with diverse premises (technical scenarios, utopian/dystopian fantasies, emancipation through the pluriverse), emerging arenas of consensus and contestation (net-zero targets, climate emergency declarations), and performative interventions with diverse prefigurative intentions (normalisation of future imaginaries, catalysis of change, prolongation of the status quo, peaceful protest and persistent localised conflict).

Low-carbon: Major crises come equipped with their own vocabularies. Not so long ago the term ‘low-carbon’ made little to no sense in the general public, but the climate crisis has made it a ubiquitous catchword for desired futures beyond the crisis. As an adjective it can be attached to energy systems, cities, transport systems, value chains, places, and so forth to signal an intention to take part in addressing the global challenge of achieving a green transition. If the transition is the journey, low-carbon is the destination. We approach the need for low-carbon transitions as an external impetus that may be interpreted and embedded in local practice and decision-making mechanisms in infinite ways. The perceived urgency and the planetary scale of the challenge bring with them an inherent focus on generating rapid and scalable impacts since low-carbon places do not amount to much on their own. This requires renewed attention to the complexities of scale and to the momentous politics of rupture, tendencies of polarisation and possibilities of consensus.

Places: Our interest in future becomings translates into a focus on place as the site of becoming, as the event of our throwntogetherness, and as something that not only locates but situates. While acknowledging the continued pertinence of space, we turn attention to the places where the climate crisis becomes situated, real, and unavoidable. As a constellation of processes, place is pliable, open to change, pregnant with possibility, a wellspring of becoming and of unmaking rather than any one given thing. In multilevel governance systems, municipalities are charged with interpreting and implementing key decisions locally (i.e. to make them take place, whether this be a city, suburb, village, valley, forest, or airport). Too often, the municipal level is equated with cities, whereas many municipalities are only lightly urbanised. Cities concentrate and accelerate socio-material flows and serve as key sites of decision-making and the enactment of transitions. However, low-carbon cities brought about at the cost of renewed extractivism and the appropriation of pastoral and variegated rurality through enclosure and commodification of natural resources may well represent a prolongation of exploitative relations and lead to revolt, hence tenable transitions to low-carbon places entail overcoming patterns of territorial difference and enabling substantive shifts in developments at the regional scale as well.

We welcome abstracts on a broad range of combinations of these concerns in response to this problem framing. We are particularly keen to collectively investigate the ‘technologies’ through which low-carbon urban futures are being made; not technologies in a technical sense but by way of interventions that shape larger sociotechnical transitions. Extended abstracts of 500 words, along with 100-word bios of authors including institutional affiliation, should be submitted by 13 January 2022 to [email protected] and [email protected]. We will confirm acceptance for shortlisted abstracts by 20 January 2022.

We aim to convene contributors for a workshop during March 2022, to be hosted in Stavanger contingent on funding from the Positive Energy Districts European Network (http://pedeu.net). Formal invitations to the workshop will be issued in early February and participants must submit short drafts (3000–5000 words) by 28 February 2022. The workshop will aid manuscript development and conceptual integration, with a full manuscript submission deadline of 15 April 2022 for external peer review through the journal portal. We hope to complete two rounds of review and issue final decisions for all manuscripts before the end of 2022.

Sustainable development solutions: ✅ backed by research ✅ ready to be put into action Get the collection of articles here: https://t.co/MvOjPQGCgk #GetCleanThinkin...

Read more
0
1
2 hours ago
RT @Geopolitics_Jl: New and #openaccess in Geopolitics: The introduction to the special issue on "States of Suspicion: How Institutionalise…

6
0
3 hours ago
⏰ Don’t wait! The deadline is January 31st ❗ The Journal of Real Estate Portfolio Management is recruiting for an Editor. Apply here: https://t.co/V5WtujxKDY @ARESc...