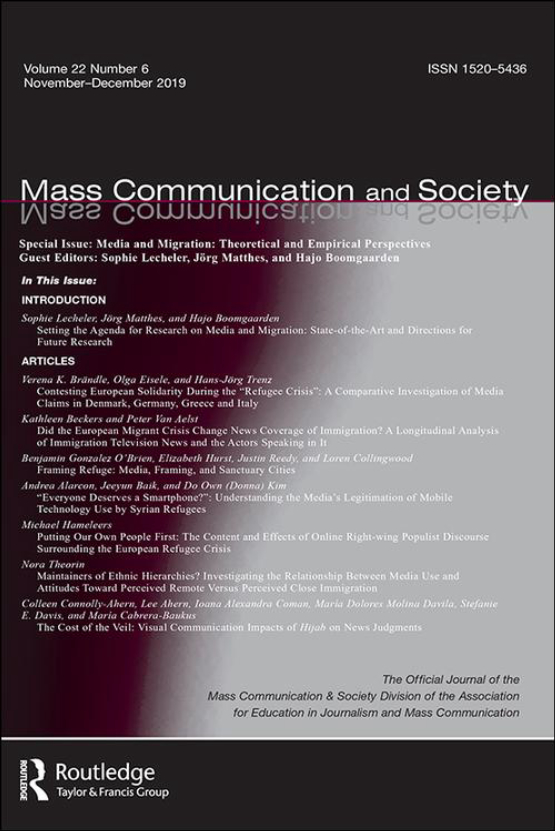 Media and the Future of Democracy: Theoretical, Empirical, and Comparative Approaches

Scrutiny on how news outlets and other media function in relationship to governance and political representation is warranted in a period of democratic backsliding, conspiratorial thinking, and populist backlash. This special issue sets out to advance theory on how mass communication contributes to backsliding or the safeguarding of democracy.

Political scientists define backsliding as erosion of support for norms that foster responsive governance and consent of the governed. While this literature highlights attacks on a free press as a sign of accelerated decline, it has not explored possible complicity of news media or the role of social media in cultivating illiberal sentiment. Trumpism in the United States has drawn a great deal of attention, yet a period of global democratic recession underscores the importance of comparative perspectives on media in established, developing, and declining democratic systems.

Normative theory raises expectations for a digital mediascape in redeeming participatory democracy. The impression left by much of this literature is that news media and social media should squeeze as much civic virtue out of the public as possible. How should normative theory reconcile its aspirations for inclusiveness with audiences reveling in the angry carnival of political spectacle?

The special issue invites theoretical and empirical contributions that address research questions in these areas:

Democratic decline and news media. Mediatization and other theory might reveal the ultimate costs of media logic in the undermining of responsive governance. Mass communication scholarship also has much to offer in theory of representation. For example, if reified grievance is directed at retribution rather than policy, news outlets contribute to backsliding in the further pathologizing of (non)-responsive government.

Democratic decline and social media. Perspectives such as reinforcing spirals and recursive communication  would help to explain the demand side of backsliding—why social media engagement can engender resentment toward institutions, impatience with democratic procedures, and circulation of disinformation. For the semi-erudite, confirmation of belief in echoing enclaves constitutes a meaningful form of citizenship. The role of social media in giving license to anti-intellectualism should be probed with the future of democracy in mind.

The interplay of social media and news media also deserves scrutiny. Inter-media framing and agenda setting during election cycles, for instance, might document the types of messaging that explain why so few voters are willing to punish co-partisan candidates who violate democratic norms.

Reflexivity and reform. A tactical reflexivity would mask complicity in backsliding to the extent that journalists fail to acknowledged the ways in which the news interacts with underlying social forces. The Fourth Estate presents itself as an ally of the people, yet in a zeitgeist of punitive populism, the profession must forge a healthier relationship with the public. Contributors are encouraged to consider how professionalism, norms, and news values shape reflexivity and ideas about reform.

Media history. Theory-based analyses of historical periods could reveal conditions in mass communication that give rise to authoritarian politics. Scholarship might account for how the press has developed in relation to political representation and governance. Media politics became the successor to party politics in many systems, bringing forth new forms of participation but also setting loose irrational forces in contempt of the liberal order.

Comparative perspectives. Global democratic recession creates opportunities to identify role conceptions that vary across journalism cultures and that are implicated in backsliding or reform. Interventional aspects of journalism, for example, are most apparent in developing democracies and least supported in established democracies. Empirical study should be sensitive to where democratic sustainability as an articulation of interventionism emerges in response to backsliding.

Manuscripts are to be submitted via the Mass Communication and Society online system at http://mc.manuscriptcentral.com/mcas following the standard journal submission procedures. Authors should note in their cover letters that the submission is for the special issue devoted to “Media and the Future of Democracy.” Final publication will be in 2022. Any questions concerning this call for papers may be directed to Professor Michael McDevitt, [email protected]

View the latest tweets from AEJMC_MCS

AEJMC’s Mass Comm. & Society Division is calling for reviewers for the ’21 Conference. Please sign up at https://t.co/OndLw6NzAe and spread the words! Thank you!

Read more
0
0
53 minutes ago
Important Update: The AEJMC Midwinter Conference submission deadline has been extended to Dec. 15 AND the conference has switched to fully virtual. https://t.co/Ped1DD5GP...

Read more
2
4
50 days ago
Mass Communication and Society is inviting submission of papers for a special issue, "Agentic Perspectives on Mobile Media." The submission deadline has been extended to ...