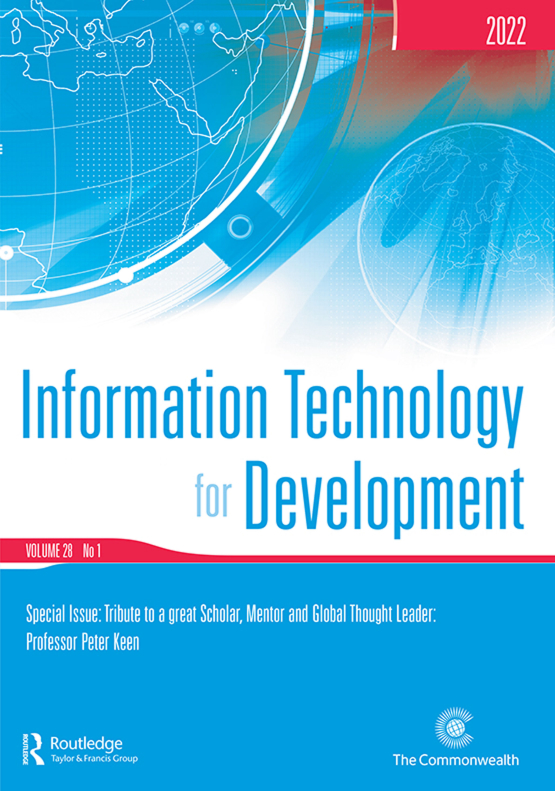 The 1990s debates about the role the Internet played on different human development dimensions gave rise to the Information and Communication Technologies for Development (ICT4D) field. Existing research shows that digital technology can make a difference in people’s lives. ICT has the potential to empower marginalized individuals and groups, supporting social inclusion (Baron & Gomez, 2013; Díaz Andrade & Doolin, 2016) and financial inclusion (Diniz, Bailey & Sholler, 2014; Joia & dos Santos, 2019). It also allows them to participate in mainstream socio-economic activities (Mthoko & Pade-Khene, 2013; Armenta et al., 2013; Krauss, 2013). These positive outcomes may result in the perception that digital technology is the ‘cure-all’ for diverse societal problems. However, development is not a straightforward issue that can be solved simply by introducing digital technology (Lwoga & Sangeda, 2018). ICT4D is about the local interpretations of development and understanding of local processes involved in delivering development (Unwin, 2009).

In this special issue, we would like to draw attention to the social processes in which ICT4D research projects occur. Presently, most ICT4D studies occur in developing countries in the Global South and many focus on describing ICT4D interventions. However, most of those studies draw from theories developed and applied in the Global North, such as institutional theory (Bass, Nicholson, & Subhramanian, 2013) or technology acceptance (Thomas, Li, & Oliveira, 2017), among others. While drawing upon such theories can, of course, help us understand emerging phenomena, context cannot be ignored (Andoh-Baidoo, 2017; Davison & Martinsons, 2016). ICT4D research requires deliberate attention to the conditions in the field. Equally critical in ICT4D analyses is the choice and application of theories, whether deductively (to guide the investigation) or inductively (to discuss the findings). Both discerning contextual conditions and careful consideration of theory are conducive to understand the local meaning of development.

Theorizing and employing theory in different settings is a social practice, an act informed by the socio-cultural conditions of the time (Horkheimer, 1982). Against this background, we argue that the phenomena that inform ICT4D research directions, portray specific ways of valuing and thinking that are typically informed by discourses from ‘developed nations’, and which often ignore local contexts, culture and historicity (Ndhlovu, 2017). ‘Imported’ conceptualizations often fail to account for the different ways of knowing in the Global South (Connell, 2014), making the simplistic one-to-one translation of categories, paradigms, meanings, and reasonings from one context to another a pointless exercise – e.g., from Europe to India (Chakrabarty, 2000). However, ICT4D research is a moving target. For example, an influential perspective that shaped what we do in ICT4D is the idea that there are developing and developed countries, First and Third world countries, North and South, Western and non-Western, etc. This dichotomous categorization is diminishing. Furthermore, problems of deprivation are not unique to the Global South; ICT4D research acknowledges the vulnerability of marginalized communities in the Global North (Loh & Chib, 2019) and the multidimensional nature of development (Qureshi, Noteboom & Schumaker, 2015). The rise of ICT4D research informed by non-Western philosophies (Jimenez & Roberts, 2019) and recent calls for research on Indigenous theories (Davison & Díaz Andrade, 2018) herald the presence of more endemic research in the information systems field. Regardless of geographical location,  awareness of contextual circumstances is needed in theorizing and using theory in ICT4D research (Avgerou, 2017). (Our understanding of theorizing and use of theory includes different categories of theory (Gregor, 2006))

In this special issue, we invite authors to explore relevant questions that will help the ICT4D community understand the local social processes that explain ICT4D phenomena. Submissions that explore and challenge dominant research directions and goals, and that help articulate research practices that underpin success stories and ICT4D failures are particularly welcome.

Topics may include, but are not limited to:

Researchers and practitioners are invited to submit original papers using the journal submission and reviewing web site. Submitted papers should follow the instructions for authors.

When submitting your paper to this special issue, please choose the title of the issue, “Understanding local social processes in ICT4D research”, and indicate your preferred editor to be Kirstin Krauss. Submissions to the special issue should be full research papers or practice papers. Each submitted paper will be peer-reviewed in the same manner as other submissions to the Journal of IT for Development. Relevance, quality and originality of the contribution are the major acceptance criteria for each submission.

After initial screening, papers are reviewed by selected members of the editorial board and peers from an international pool for quality, consistency and research contribution. In their cover letters, authors may nominate one of the special issue editors and indicate preferred reviewers where no conflict of interest exists (e.g., an existing business or professional partnership, past or present association as thesis advisor or thesis student, and/or collaboration on a project or on a book/article/report/paper or co-editing of a journal, compendium, or conference proceedings constitutes a conflict of interest). While an author can nominate preferred reviewers, there is no guarantee that the nominated reviewers will be asked to review. Papers submitted to this journal must contain original results and must not be submitted elsewhere while being evaluated. If a duplication is found, papers are subject to being rejected for that reason alone.

RT @tandfSTEM: Explore this must-read collection of Most Read Research from @theORSociety! All content is free to view until the end of 202…

1
0
12 hours ago
Congratulations to Gabriele Salciute Civiliene, whose article in @IntSciReviews won this year's Martha Cheung Award! Find out more about the award, and read the article ...

Read more
3
3
12 hours ago
Add your insight for a special issue of Connection Science. We welcome contributions that examine recent advances in blockchain-enabled smart contracts. Learn more and co...

Read more
2
2
3 days ago
The Journal of Control and Decision welcomes research for a special issue: IoT-based Enterprise Management for the Future era. Learn more and contribute today: https://t....