Submit a Manuscript to the Journal
Interiors

For a Special Issue on
Ecologies of the Interior 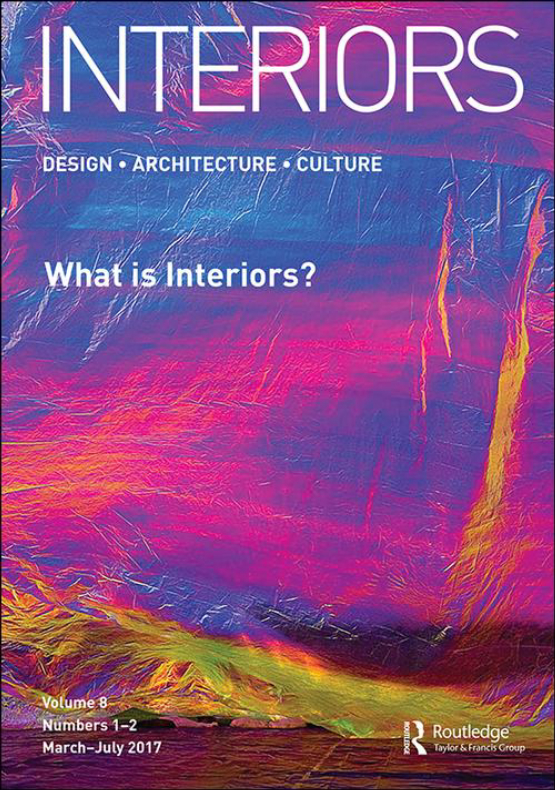 Ecologies of the Interior

The practice of interiors is one of acting on and modifying an interior space to create environments that protect us from the extremes of the external world–be it weather, temperature, or even nature itself. But what can be forgotten is that these actions, often unwittingly, affect that external world in ways that are more profound than we like to admit. In the twenty-first century, it is the planet that needs protecting from us. This theme issue elicits responses to how interior design and/or interior architecture might mitigate these effects and address the climate crisis.

Until recently, most climate discourse has focused on carbon; embodied carbon, operational carbon, low carbon technologies, and carbon offsetting. Interiors play their part by extending the life of existing buildings through adaptive reuse and upcycling. What is increasingly apparent is that carbon counting is not the only response and that long-term change lies in ‘cultural rather than technological, transformation and this must occur at the level of mindsets – the shared ideas that determine to a large extent how society functions.’[2] A clue lies in the ancient Greek word oikos meaning ‘house’ or ‘home’ and also the root of the word ‘ecology’ and ‘economy.’ The entomology connects physical structures and organisational structures. In 1991 the anthropologist Mary Douglas expanded on this idea when she defined a home not as a physical place, but as what she described as ‘a pattern of regular doings’ constructed and acted out by an embryonic community. While such a home is located in space, because it also exists in time, it is ‘not necessarily a fixed space’ and ‘because it is for people who are living in that time and space, it has aesthetic and moral dimensions.’[3] It is these patterns of regular doings where real change can occur.

This theme issue, Ecologies of the Interior, welcomes alternative models for thinking about the relationship between interior space, ecology, and economy. It welcomes papers that consider how we might shift from sustainable to regenerative design, offering cyclical and long-term thinking, addressing issues such as dis-accumulation, decommodification, and decolonization, as well as a greater understanding of genius loci. Submissions could be based on theoretical and historical investigations, creative scholarship, research, and practice-based explorations in the form of full-length articles or shorter written essays that prioritize graphic content.

For consideration, please provide a note of interest for this theme issue: Ecologies of the Interior. This can take the form of a proposal of up to 500 words along with up to five bibliographical references, and approximately 3-5 images as needed. Please include your contact information. The editorial team will select proposals from this phase to develop into a manuscript. Selected notice of interest does not guarantee publication, this will be determined through the anonymous peer-review process of developed manuscripts. Please see the journal website below for additional information on submissions. Full manuscripts due May 31, 2023.

10
0
6 days ago
Add your insight for a special issue of Geografiska Annaler: Series B, Human Geography: Quiet Austerity: Geographies of state restructuring and retrenchment in the Nordic...

Read more
1
1
9 days ago
How can you encourage creative risk-taking in your students? We answer this question and more during our free, on-demand webinar. Watch today! https://t.co/bjQAFFNvsz ht...

Read more
0
0
12 days ago
RT @regstud: What were the most read articles in @regstud journals during 2022? Visit https://t.co/FzwUYBIiPz and see the 3 most read arti…