Submit a Manuscript to the Journal
Impact Assessment and Project Appraisal 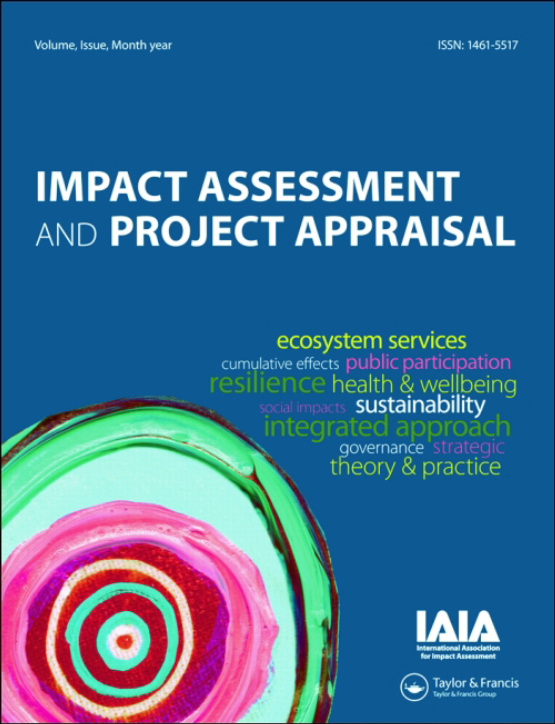 On December 1st 2020, European Union (EU) member states’ ministers, responsible for spatial planning, adopted a new Territorial Agenda (TA) 2030 for addressing differences in development potentials and challenges across various areas, such as small and medium-sized towns, cross-border regions, areas of demographic decline and others. In this context, the Territorial Agenda states that: “at all levels, from sub-local to pan-European, there are increasing economic and social disparities between places and between people along with environmental risks and pressures. These are driven by economies of scale, imbalanced access to markets and qualified labour, as well as disparities in quality of governance and public services.” In order to address these imbalances and challenges, the TA set forward two overarching objectives: A Just and Green Europe and three more detailed priorities to each objective. To achieve these objectives, several European institutions have come together to prepare and implement pilot actions (read more). These actions aim at preparing place-based policies by showing how the territorial dimension of regional, national and European policies can be actively addressed.

One of the pilot activities is called “Understanding how sector policies shape spatial (im)balances”. It focuses on regional based Territorial Impact Assessment (TIA), more precisely, on developing a better understanding of policy impacts on selected territories, in this case, the cross-border areas. Countries participating in this pilot activity have selected specific territories and national policies in order to identify what kind of impacts these policies will have on them. To do that, they have revived the idea of TIA, an assessment approach that has been heavily support by the European Commission and its development facilitated by ESPON (the European Observation Network for Territorial Development and Cohesion), which started in 2004. While at the beginning of the development of TIA approaches were predominantly quantitative and rooted in econometrics (Fischer et al., 2015; Marot et al., 2021), later on, ESPON also invested in development of more user-friendly approaches like ESPON EATIA. The European Commission’s efforts to launch TIA in the every-day policy making have included the preparation of the guidelines, ESPON TIA Tool, ESPON TIA Quick check and support of several research and application projects (Medeiros, 2020). However, in practice, only some of the countries have adapted more territorially sensitive approaches to policy making and integrated some of the guidelines into their existing policy making procedures (Nosek, 2019).

Through this open call, we invite paper contributions for addressing the following questions:
1. What is the current state of TIA (and / or similar approaches) in support of territorially sensitive policy making?
2. What approaches to TIA (and / or other similar instruments) exist?
3. What can be deducted from existing TIA approaches with regards to territorial governance theory?
4. Are TIA approaches tailored to the needs of specific territories, e.g. cross-border regions, legging behind regions?
5. What are the elements and characteristics of territorially sensitive governance in 21st century?

Please select the special issue title when submitting your paper to ScholarOne. You may submit full papers, professional practice papers or letters.

Check out the *special section* in the latest issue of Atmosphere-Ocean, exploring #MachineLearning applications in the atmospheric and oceanic sciences. Guest edited [email protected]

Read more
0
1
2 days ago
Browse our journal articles such as All Earth, Big Earth Data, Australian Journal of Earth Sciences and many more 👉 https://t.co/02IYFU60BO. Free access only available...

Read more
2
2
3 days ago
The International Journal of Image and Data Fusion presents its Editor's Choice Paper: Creating a virtual reality environment with a fusion of sUAS and TLS point clouds. ...