Submit a Manuscript to the Journal
Housing Studies

For a Special Issue on
Housing cooperatives and housing systems: lessons from history 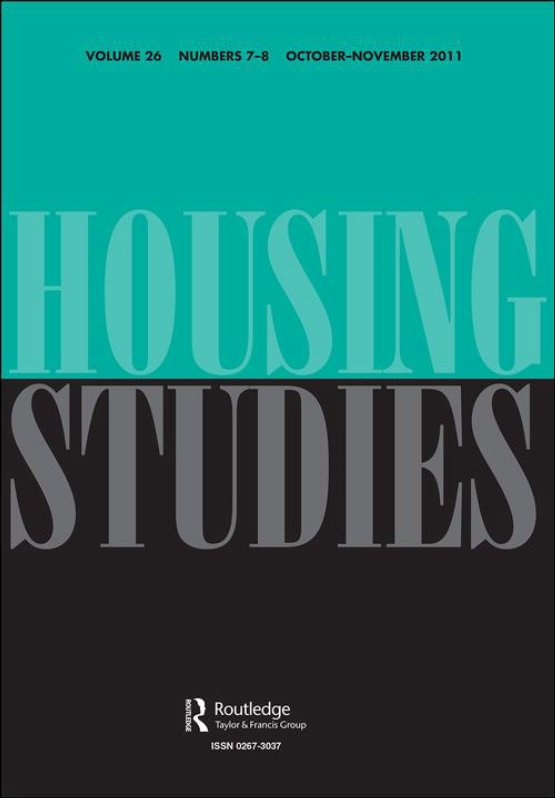 This special issue addresses the relationship between the historical development of housing cooperatives and housing systems in different national and regional contexts. Several studies suggest that since the second world war, housing cooperatives have both influenced and been shaped by wider housing dynamics – that we may identify here as housing systems. ‘Housing systems’ (often used interchangeably with ‘housing regimes’) may be defined broadly as the actors, norms, rules and policies governing the production, exchange, and distribution of housing within a state, region, or city (Hoekstra, 2020; Ruonavaara, 2020). The three Scandinavian cousins, for example, – Sweden, Denmark, and Norway – all experienced increasing property prices and mortgage-debt levels in the wake of deregulation of well-established and large cooperative housing sectors (Kohl & Sørvoll, 2021). But the interplay between housing cooperatives and housing systems has not been sufficiently researched and has hitherto not been probed systematically in the literature.

Cooperative housing has been largely neglected in the housing systems literature, including substantial contributions like Kemeny (2006), van der Heijden et al. (2011) and Stephens (2020a). This is surprising given that cooperative housing has been a major tenure in Sweden since the postwar years, the adopted home country of Jim Kemeny, the most celebrated scholar of the housing systems literature (Kemeny, 1995; Kemeny, Kersloot & Thalmann, 2005; Kemeny, 2006). In his work, the question of tenure plays a central role as he refers to “rental strategies” to identify housing regimes in relation to types of housing market (unitary/integrated/dualist). Today, the role given to tenure tends to be reconsidered and even played down in those theories, as we can see in the recent efforts of housing scholars to develop a better theoretical understanding of change in housing systems (cf. the debate featured in Housing, Theory and Society, Volume 37, Issue 5). Nevertheless, Stephens invites to renew the perspective on the tenure “as its study can be illuminating of the system as a whole, provided that it is treated in […] a “system embedded” way. This means […] to go beyond narrow categorization (owner-occupation, social rented, etc.) and capture its “contingent” qualities, and understand its jurisdiction-specific legal basis, its financial qualities (e.g. its liquidity as an asset), and its cultural symbolism (e.g. cultures of home-ownership)” (Stephens, 2020b, p.589). In this perspective, cooperative housing appears as a particularly heuristic and under-researched vantage point for the study of housing regimes, because it escapes the classic categories of ‘owner-occupied’, ‘private renting’, ‘social renting’, and displays certain institutional variations around the world (Moreau & Pittini, 2012, p.6; Clapham 2012). Studying cooperative housing evolution leads to the opening of the black box of its categorization and may help us identify its contribution to historical development of contemporary housing systems.

The literature on housing cooperatives also does not include many references to the debate on the development of housing systems. There are many relevant case studies from countries with a rich and long-standing tradition of cooperative housing, such as Norway, Sweden, Denmark, Switzerland, Austria, and Germany (Bengtsson, 1992; Sørvoll, 2014; Sazama, 2000; Reynolds, 2016; Balmer & Gerber, 2018; Lang & Stoeger, 2018; Vidal, 2018; Sørvoll & Bengtsson, 2020a). In addition, some scholars have tried to draw general lessons from comparative studies of cooperative housing in different countries, such as the four Nordic and three German-speaking countries (Kohl & Sørvoll, 2021), Switzerland and Uruguay (Duyne Barenstein et al., 2021) and Sweden, India, and the United States (Ganapati, 2010). But this sub-field is mainly characterized by quite specific studies that do not relate the development of cooperative housing to the wider history of housing systems.

There are also very few comparative studies that attempt to compare the long run trajectories of cooperative housing - despite the fact that the empirical richness of housing cooperatives lies in their longevity. Housing cooperatives indeed have a long and varied history. In the 19th and early 20th century, cooperative housing has functioned as a method to pool resources, reduce costs, and lower the collective barriers to decent quality housing (Bullock & Read, 1985; Novy & Förster, 1991; Harris 1999). Albeit to varying degrees, it has also been associated with a political commitment to autonomy from the state, independence from employers and landlords, democratic participation, non-profit principles, and solidarity between different groups on the housing market (Barenstein & Sanjinés, 2018; Sørvoll & Bengtsson, 2018). During the 20th century, cooperative housing in various forms became a significant urban housing tenure in national contexts as different as Estonia (Otsing, 2004), Poland (Coudroy de Lille, 2015), Germany (Kohl, 2015), Austria (Lang & Novy, 2014), Switzerland (Balmer & Gerber, 2017), India (Ganapati, 2010), Uruguay (Barenstein & Pfister, 2019), and the Scandinavian countries (Sørvoll & Bengtsson, 2020a). But the history of cooperative housing is discontinuous; it stops in some countries, such as France, it goes on developing in the longue durée in others; it expands at certain times and shrinks at others.

In this special issue, authors will be asked to merge insights from the literature on the evolution of housing cooperatives and housing systems. The aim is to expand on these literatures through papers informed by theorizing and new empirical studies in order to fill the cooperative lacuna in the housing systems literature. We wish to explore their development over large tracts of time, not through traditional detailed historical reconstructions of the past, but by way of using the past as an instrument to better understand the present (Foucault, 1963; Rosanvallon, 2003). In our view, “taking a long view” (Flanagan & Jacobs, 2019) may reveal the role of “critical junctures” or forks in the road important for future development (Bengtsson & Ruonavaara, 2010), and also highlight specific drivers of change or factors that have inhibited or played a decisive role in the evolution of housing cooperatives in various housing systems. These papers should answer one or more of the following questions:

In short, the history of cooperatives appears very much linked to core features of housing systems that govern the production, exchange, and distribution of housing. This is a source of strength and survival, but also a source of potential fragility. The aim of this special issue is to better understand the long run development of housing cooperatives in relation to the housing systems in which they evolve, and thereby expand on the scholarly literature on the relevance of the past and historical methods to contemporary housing studies (Jacobs, 2001; Bengtsson & Ruonavaara, 2010; Yates, 2013; Flanagan & Jacobs, 2019; Carriou, 2020). New studies of cooperative housing history may also provide examples of innovative production and allocation practices offering paths out of the current affordability crisis transcending and combining features of private and social housing provision.

We invite contributions that address the topic of the Special Issue from different disciplinary backgrounds and apply various theoretical and methodological perspectives. Titles and abstracts (300 words max.), along with full contact details, should be submitted directly to one of the Special Issue Editors no later than July 1st, 2022 (see contact details above). Instructions for authors regarding the formal preparation of their full papers are available on the Housing Studies’ website. When submitting your manuscript through the online system (https://mc.manuscriptcentral.com/chos), you need to indicate that it is a submission to this Special Issue. The guest editors will hold a virtual paper development workshop on January 10th, 2023. If you have any questions about the special issue, please contact the Special Issue Editors through the contact details provided above.


Instructions for AuthorsSubmit an Article

View the latest tweets from HousingJournal

Read more
6
9
12 days ago
RT @JustinKadi: It was based on this piece I did w Johanna Lilius in @HousingJournal on the internationally remarkable development of socia…