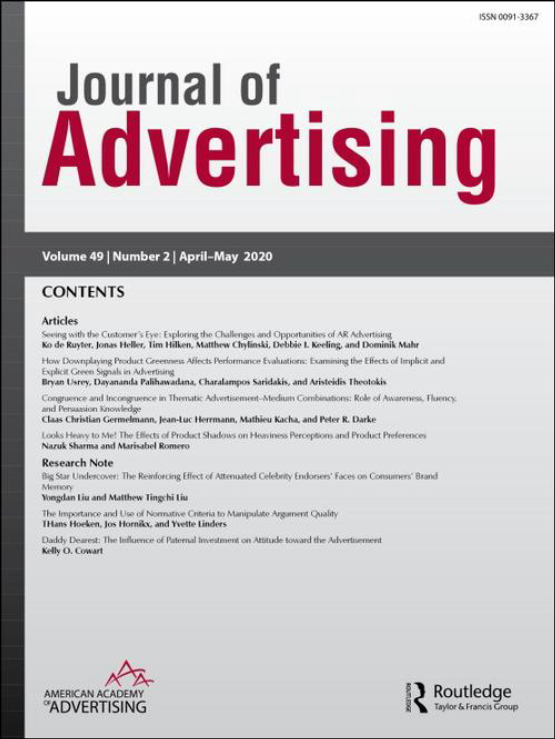 This special section is devoted to advertising theories, methods, conceptualizations, and/or practices that may no longer be on the cusp of advertising scholarship interest or practitioner use but which may still hold significance and utility for advertising scholars and specialists. When JA Editor-In-Chief Shelly Rodgers suggested this potential special section focus to us, we were reminded of a Plenary session presentation by Dr. Lawrence A. Crosby at an American Marketing Association Summer Educators’ Conference. Dr. Crosby’s address was on Marketing topics that had once been of importance and interest to the academic community, but which seemingly had disappeared from current scholarly attention. Dr. Crosby specifically asked, “Whatever became of…?” and then answered his query by citing specific examples which he believed represented discarded or forgotten marketing topics that still deserved additional inquiry. Among those raised by Dr. Crosby was the Fishbein model and its significance and pertinence for understanding consumer behavior (cf. Crosby and Muehling 1983).

In this special section of JA, we wish to carry Larry’s question forward and into the present by asking potential contributors to consider advertising theories, methods, conceptualizations, and practices that advertising scholars have seemingly abandoned but which may still have relevance for the advancement of advertising thought and practice today. What remains to be learned from further investigation into such topics and how does such endeavor advance what we know or think we know about advertising knowledge and practice? Since research-based knowledge development is rarely, if ever, a linear, sequentially ordered progression (Carlson, Rifon, and Royne 2014), loss of interest in a topic should not necessarily signal its demise as a viable source of further inquiry. Moreover, knowledge development should not be restricted to only that which is new or unique. Rather, we believe knowledge development can and should also include extending understanding into areas that may have been deemed unworthy of additional consideration, but which deserve to be “resurrected.”  For example, we seek papers that have the potential to enhance advertising theory by resurrecting a concept thought to be outdated in today’s world, that could be incorporated into a theoretical framework and provide a new contextualization of a recently developed model or theory (cf. Laczniak 2015).

Consequently, we invite scholars and practitioners to also consider “Whatever became of…?” in regard to an advertising related topic. Is there an advertising theory, research stream, methodological aspect/procedure, and/or practical consideration that deserves to be resurrected? If so, how and in what form? We envision that an essential component of submissions for this special section consideration will include a comprehensive and current literature review. This review should lay the groundwork for the forgotten/neglected topic in terms of what is known about it but also what is still to be learned. Authors might then provide research propositions/hypotheses which are indicative of how additional inquiry into the topic could proceed and/or actually test empirically those propositions/hypotheses that arise from the literature review. Original Research Articles and Literature Reviews, as detailed on the JA website, will be considered. We will also consider Research Notes but expect that such Notes will still include a literature review, as noted above, which is indicative of the importance of the topic as well as directions for further topic inquiry (see JA website for submission criteria).

Ideas for potential topic areas might begin by perusing JA as well as the Journal of Current Issues and Research in Advertising and the Journal of Interactive Advertising. JCIRA, for example, in its earlier days, devoted entire issues to literature reviews (Carlson 2015). For example, Muehling, Laczniak, and Andrews (1993) developed a literature review on involvement, specifically regarding this construct’s relevance for advertising research. We abstain in this call from providing what we consider to be forgotten/neglected topics in advertising (an endeavor that could subvert the purpose and possible appeal of this special section for other contributors). We believe that it’s preferable to leave topic selection and justification open to potential contributor discretion. However, involvement as it pertains to advertising could serve as an exemplar of a neglected topic that might be a viable candidate for special section consideration. We thank JA EIC Shelly Rodgers for suggesting this special section possibility to us and we look forward to reading what others believe to be neglected/forgotten advertising topics that are now worthy of resurrection.

Submit manuscripts through JA's ScholarOne during July 1-August 1, 2021. Be sure to select "SPECIAL SECTION: Forgotten/Neglected Advertising Topics.” Also note that:

Organizations have to adopt new HR strategies in times of crisis. This special issue from The International Journal of Human Resource Management aims to examine these cha...

Read more
0
0
about 1 hour ago
Celebrate International Women’s Day on March 8 by attending @ICSB Women’s Entrepreneurial Leadership Impact Conference! Women have been at the forefront of #innovatio...

Read more
0
0
4 hours ago
A new Instructor Profile area is available under 'My Account'. Requesting an Inspection Copy for your Business or Economics course, is now simpler and quicker! You can re...

Read more
0
1
9 hours ago
What is the impact of time and space on HR management in multinational enterprises? This special issue aims to advance our understanding of the varieties of temporal-spat...