Submit a Manuscript to the Journal
Basic and Applied Social Psychology 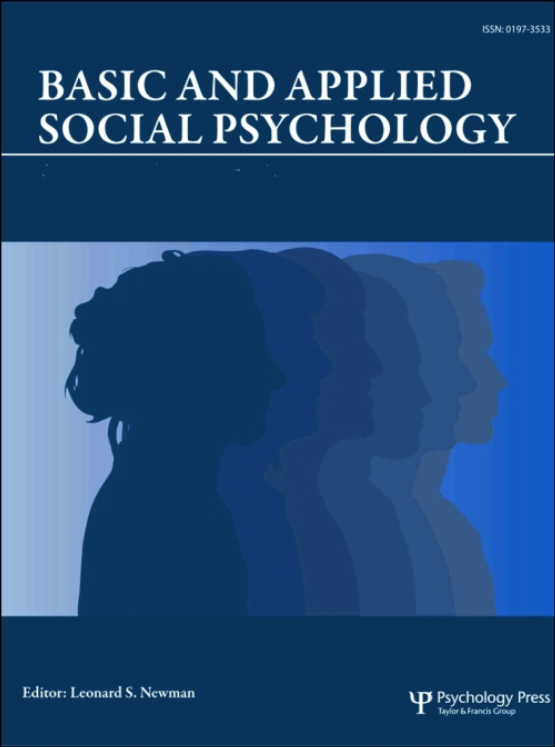 Despite the cornucopia of applied research papers in social psychology journals, including Basic and Applied Social Psychology (BASP), there are few successful applications in the sense of having instigated a significant bettering of the human condition. A possible reason for the lacuna might be that applied research articles rarely include a detailed plan for application that can be understood and adopted by public officials who might be in a position to render the application. Our goal is to have a Special Issue of BASP that includes articles that provide such detailed plans. Put another way, our aim is to have a Special Issue of applied social psychology that actually is applied! Because the goal is eventual application, authors should make feasibility a primary consideration.

As to what sorts of manuscripts are of interest, our hope is that authors will submit manuscripts that bridge the gap between applied research findings in the social psychology literature, and successful applications. These manuscripts might propose detailed plans for large scale interventions or detailed plans regarding public policy change, including strong consideration of how to negotiate the potential political or financial obstacles. We briefly outline some possibilities.

1. A plan that has not yet been implemented, in which case the plan itself will detail what could be implemented to address a particular social policy issue
2. A plan that has some preliminary data
3. A plan that has been implemented
a. For option 2 or 3
i. it is important to explain the intervention findings in detail, with all relevant descriptive statistics (e.g., mean, standard deviation, skew, effect size, etcetera)
ii. if plans are based on correlational or mediational findings, not only should authors include the relevant descriptive information, but arguments about why the findings should be interpreted as convincingly supporting the plan too. This may be challenging as mediation analyses fail to provide strong causal evidence (see the BASP 2015 Special Issue on mediation).

We wish to cast a wide net and encourage authors to contact us if they have questions pertaining to topic suitability ([email protected] or [email protected]). We reiterate that feasibility is an important consideration, as is the potential to better the human condition.

All articles should be in APA style, as usual for BASP (see template below). However, the nature of the APA categories may change. For example, Special Issue introductions should focus on identifying the behavior or behaviors to be changed, candidate interventions, reasons for inclusion or exclusion, and how behavior change is to be evaluated. The method section should explicate the target population, where in the field the intervention is to be applied, and the procedures for application and evaluation. Finally, the discussion can focus on anticipating problems, alternative adjustments or plans for addressing them, potential next steps, and larger implications whether the plan proves to be successful or unsuccessful. In characterizing potential success or failure, authors should avoid using null hypothesis significance testing, traditional confidence intervals, and so on (see the 2015 BASP editorial); but instead should focus on issues such as proportion of people helped or harmed, the amount of the help or harm, or others, possibly including visual depictions of expected or potential outcomes.

Introduction: Establish the topic for which behavior change is desired, the reason for choosing
that topic, and the behavior or behaviors to be changed; characterize the behavior, context, and barriers to change; identify candidate interventions (and reasons for inclusion or exclusion), set up the hypotheses to test; explain how to detect change; other. Although the plan formatting will correspond to the formatting of an empirical paper, the emphasis will be less on reviewing previous literature and more on explicating why specific behaviors/contexts will be addressed, and why some interventions are considered more viable than others. The review, if there is one, should justify what is included or excluded, to defend the intervention.
Method: Explain the target population, sampling procedure, and procedures for both application and evaluation.
Discussion: Discuss alternative plans, potential problems and how to handle them, and larger implications whether the plan is successful or unsuccessful.

Our ultimate goal is to publish the Special Issue in Autumn of 2022. Thus, there will be a soft deadline of September 1, 2021 by which date we prefer to receive submissions; and a hard deadline of January 15, 2022, after which we will no longer consider submissions.

Although there will be no hard page limit, our expectation is that submissions will be less than 20 pages, though we are willing to entertain longer submissions if we feel the extra length is justified.

Read more
0
1
20 hours ago
RT @identities_erc: Call For Papers for the Special Issue of Identity journal on "Dynamic self-esteem: Assessment, correlates and predictor…

Read more
4
0
3 days ago
On Wednesday Terezinha Nunes delivered a talk on From Thinking in Action to Mathematical Models for the 14th International Congress of Mathematical Education in Shanghai....