Submit a Manuscript to the Journal
Journal of Global Fashion Marketing

For a Special Issue on
Fashion And Film: Stories Of Under And Miss - Understanding 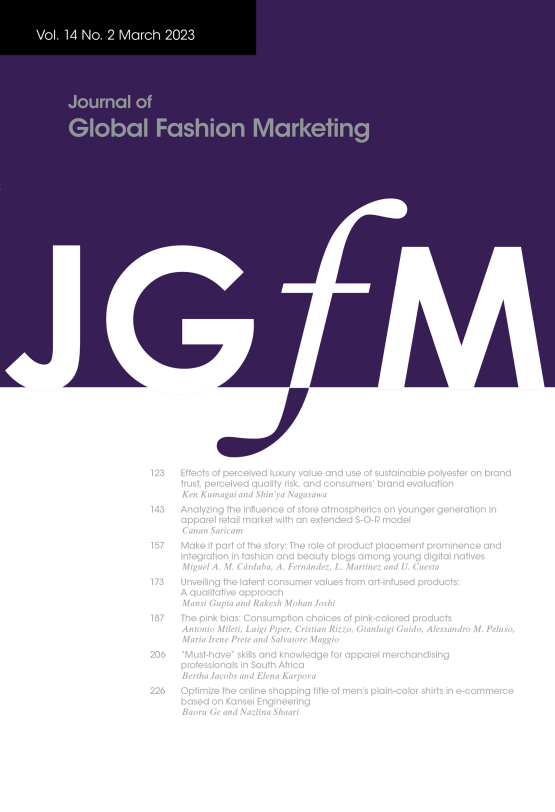 Fashion And Film: Stories Of Under And Miss - Understanding

The Journal of Global Fashion Marketing is an official publication of ‘Korean Scholars of Marketing Science’ and ‘Global Alliance of Marketing & Management Associations’. The Journal of Global Fashion Marketing will publish a special issue on “FASHION AND FILM: STORIES OF UNDER AND MISS - UNDERSTANDING”. This special issue will provide opportunities to share research findings, innovative teaching strategies, and concept papers that explore and investigate issues related to the link of cinema and fashion.

Cinema and fashion are old friends, from the beginning of the animated image. All the richness and depth of cinema, its ability to tell stories that affect us and turn our feelings upside down, has reached the world of fashion at the same starting point. This opens up a huge range of possibilities to explore, from costume designer work to special collaborations with famous designers in films, fashion has played a key role in many films, to the point of creating a totally sense of reality in the hearings. But there is also a long tradition of product placement of certain trademarks in some films, which made them unforgettable. On the other hand, at the beginning of the 21st century, fashion has discovered the potential of audiovisuals thanks to new digital and technological tools.

A new genre has emerged facilitated by the creation of social networks (collaborative video platforms such as YouTube and Vimeo were created in 2006 and 2004 respectively) that has significantly changed the way fashion brands communicate with their audiences. The fashion film feeds the fashion brand with content, allowing one to immerse themselves in their heritage and tradition and recreate the stories that make up their heritage. Also, by not routinely displaying the brand or logo in an intrusive way, it leaves the consumer the option of investigating the origin of the film on their own. In this way, he masterfully manages to attract the attention of the receiver, who experiences enormous pleasure in connecting with a story (however small or fragmented it may be) and spends long minutes of his precious time seeing and listening to what the brand wants to tell him or her.

Branded content, experiential marketing, vicarial purchases, art, music, and stage collaboration with the fashion and film industries... many themes emerge from these new forms of expression. But the content remains the main one since human life needs stories to understand the world and itself. And for this reason, characters, plot, dressing and all narrative resources are still most relevant elements of it. Fashion and film theory have a journey in academia and there are some relevant scholars specialized in the topic. Empirical research in the area will be welcome to this special issue of Fashion and Film.

Topics may include but are not limited to the following:

2
0
2 hours ago
RT @ICSB: Discover ICSB's most read 2021 articles in the Journal of Small Business Management and the Journal of the International Council…

2
0
2 hours ago
Contribute to a special issue of the Journal of Marketing Management, that is inviting submissions of service research in an age of crises, that contributes to (re)buildi...

Read more
0
0
7 hours ago
Share your research in a special issue of the Journal of Chinese Economic and Business Studies, which will focus on offering an evaluation of BRI investments in sub-regio...