Submit a Manuscript to the Journal
Entrepreneurship & Regional Development

For a Special Issue on
Entrepreneuring and poverty at the margins: here, there and everywhere 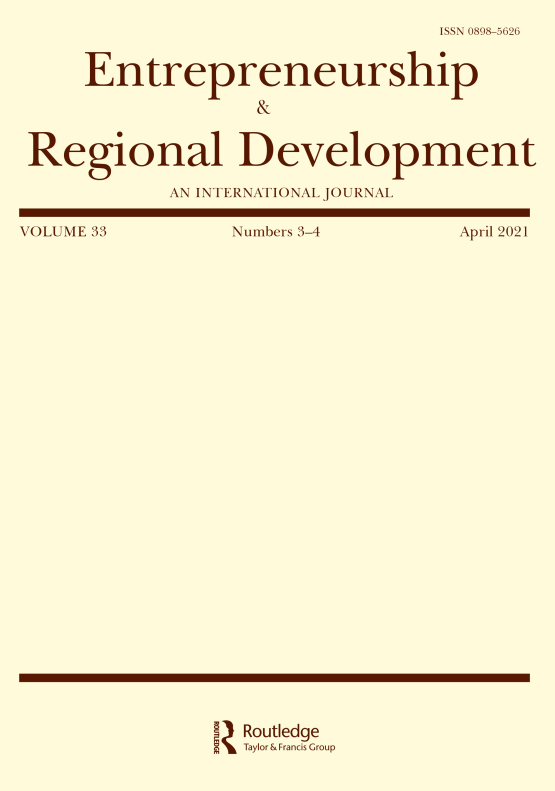 Entrepreneuring and poverty at the margins: here, there and everywhere

The poverty crisis has existed for centuries, but recent circumstances have brought it to the forefront, as poverty and its consequences are on the rise in all parts of the world. Poverty has been broadly defined as a condition characterized by a severe deprivation of basic human needs or the scarcity/lack of something which is necessary to live (World Bank, 2001). Recent perspectives suggest that poverty may push individuals and/or families to engage in entrepreneuring (Korosteleva & Stępień-Baig, 2020; Matos & Hall, 2020); they also show we know little about how, why and with what consequences poverty and entrepreneurship occur together at the margins of the society in both developed and developing countries (Si et al., 2020; Shepherd et al., 2022). There is a need to address this void since the outcomes of the practice of entrepreneuring may affect families, communities, and regions, spanning all types of activities including what has been termed as criminal and illegal entrepreneurship (Anderson, 2000; Anderson & Smith, 2007; Vershinina et al., 2018). Poverty remains a critical issue for large groups of populations and regions across the globe. Most of the existing work focuses on situations of extreme poverty in the context of developing economies. However, poverty is a relative concept, pervasive to both developed and developing economies. Entrepreneurship has been conceptualised as a solution to poverty (Bruton et al., 2013), and is seen as a remedy for social mobility of impoverished populations around the world (Cumming et al., 2020; Kimmitt et al., 2020; Morris et al., 2020). However, entrepreneurship and the practice of entrepreneuring can also work to keep people in poverty. Indeed, poverty levels remain precarious and trigger fragile ventures, a phenomenon conceptualized as the “liability of poorness” by Morris (2020). Indeed, in certain situations and for certain (groups of) individuals more entrepreneurship might be a solution and consideration of the broader, often emancipatory, effects of entrepreneurial experiences, however given high failure rates and challenges of entrepreneuring, engaging with venture creation out of poverty may also generate negative consequences – both psychological and pecuniary (Haushofer & Fehr, 2014). A more optimistic western perspective posits that entrepreneurship is a panacea to poverty and that a world’s population living in poverty can be seen as a potential market for selling goods and services from entrepreneurial activity (Bruton et al, 2013 ; Prahalad, 2005). This has complementary effects of social mobility and moving people out of poverty and implies that entrepreneurship offers the opportunity for people to break the cycle of poverty. Here, the underlying assumption of these and similar claims tend to be built on an ideal capitalistic and democratic model prioritizing economic activity and economic outputs and believing that such a perspective will bring about a better life for everyone, thereby offering a liberal perspective on entrepreneurship helping to lift people out of poverty. A remediation perspective assumes that poverty results from scarceness of resources and by providing resources to people in poverty, entrepreneurship will flourish (Sutter et al., 2019). A reform perspective assumes that poverty is the result of social exclusion and that institutions have a role to play in enabling market forces to make markets more inclusive (Sutter et al., 2019). Whilst this scholarly field is still in the early stages of development, a large proportion of studies position institutions and institutional work as a conceptual baseline from which to examine poverty and recognize explicitly the role of entrepreneurship in tackling poverty. It has been said that having well developed formal institutions is a good thing and, again, is a panacea for poverty alleviation, underpinning the need for market solutions to poverty (McMullen, 2010; Scott et al, 2012). However, our view is that we need to go beyond current theorizing which offers entrepreneurship as a solution to poverty and beyond economic solutions overall, as much of this work overlooks the everydayness of entrepreneurship and how entrepreneurship and its practice of entrepreneuring actually plays out in the context of poverty.

In this Special Issue, we aim to build an understanding about the experience of poverty and the processes and practices of entrepreneurs operating at the margins of societies. Poverty is not something that is carried by the individual exclusively but rather a social phenomenon experienced by many people, together, in a particular context. Judith Butler (2006) contends that we must take into account both poverty as a condition of precarity as well as the precariousness of human conditions in general, with the likelihood that each individual - regardless of their position in society - will at some point experience poverty as an existential condition linked to human existence. Indeed, it is difficult to study poverty without taking into account the context (Welter et al., 2016) in which poverty occurs or the contextual embeddedness in which poverty occurs. A significant amount of work in adjourning disciplines, for example, regional studies, economic geography, development economics, anthropology and sociology, have shown how poverty resides in specific regions. Spatial segregation (Bolt et al., 1998; Williams, 1998) that can manifest in concentrated deprivation and more fragmented deprivation can reveal some of the underlying patterns of factors that result in poverty, despite entrepreneurial efforts of the populations that live in these areas (Trevizo & Lopez, 2016). Tackling poverty of places and the resilience of places seems to be a much more important task than tackling poverty through the possible upward mobility of individuals. However, going beyond miserabilism and by destigmatizing poverty, we want to develop an inclusive perspective on poverty and entrepreneurship to unveil the resourcefulness of poverty, particularly by examining how people confronted with conditions of poverty develop unique competences and mindsets, and a capacity for resilience and joy which are understudied. We are also interested in the community-level mechanisms that entail overcoming the constraints of poverty, such as collective action, solidarity, trust, friendship, that enable people to navigate poverty ‘entrepreneurially’. These processes are frequently intertwined with informal institutions and are often viewed as enabling or partially compensating for the absence of formal institutions (Anderson et al., 2013). There is evidence that informal institutions have their own value in these contexts (Anderson et al., 2013), a notion that earlier writings on poverty and entrepreneurship seemed to refute. Theoretically, the experience of poverty can be framed as a limit situation: “We become ourselves entering limit situations with our eyes wide open (...) as realities can only be felt by existence. Experiencing the limit situations and existence are the same thing” (Jaspers, 1958: 67). In such situations, people must tap into their utmost intimate resources, reinvent themselves, reinvent the communities in which they live and work, try to mobilise and combine resources differently in order to survive and help their relatives to survive and succeed. Rather than a heroic enactment, this is an experience of becoming, doing and being socially embedded (Jack & Anderson, 2002; McKeever et al., 2015), which can help us to understand unique elements of entrepreneurship and how entrepreneuring at the margins plays out in reality. Whilst this call may come across as optimistic – or even naive – we also seek studies that challenge the assumption that one should always strive to get out of poverty. There are plenty of people who live all their lives in poverty. There are plenty of regions, neighborhoods and regions that remain impoverished, in spite of the focus of policy initiatives such as levelling up (Williams & Nadin, 2012; Dy, 2019). It is important to recognise and differentiate the varying conditions of poverty and where state support is necessary rather than relying on entrepreneurship as a solution. We also need to recognize and account for the costs of getting out of poverty. There exist not only gains but also (always) a cost for such a transition in terms of psychological, relational, well-being and ethical implications. It is not just about what you can do to get out of poverty (focus on resourcing), but what you are willing to do and at what cost to yourself, your family, your neighborhood, your community and your region.

We invite submissions from colleagues in the field of entrepreneurship and beyond to reflect on and write on new ways of seeing poverty, not as a stigmatising label applied to situations, regions and society but as a situated context. We would like to see submissions that entail multi and interdisciplinary approaches to understand poverty in relation to entrepreneurship: from social psychological perspectives, phenomenological studies, philosophical and anthropological perspectives to help the field better address poverty as lived experience involving individuals, families, communities and regions/cities. We particularly welcome responses that generate new ways of viewing, researching and theorising poverty that is more contextually informed and socially embedded. We are keen to see submissions that are informed by critical entrepreneurship theories, family business and family entrepreneurship, migration scholarship, as well as feminist theories and gender studies, including post-colonial debates and studies originating from Global South as well as Global North. We are open to a wide array of methods and forms in which such reflection and research may be represented, from auto-ethnography to qualitative and quantitative research and large data-based methods.

We suggest the following as possible themes for contributions:

View the latest tweets from ERD_IntJournal

Read more
1
4
5 days ago
📣 SI - PDW - @ERD_IntJournal "Entrepreneuring and poverty at the margins: here, there and everywhere" 🗺 Stockholm Schools of Economics, Sweden 📅Deadline for ab...

16
46
17 days ago
📣 New podcast from @ERD_IntJournal "Business incubation as a community of practice: an emergent cultural web" 🎙Simon Stephens from @atu_ie 🎙@kristel_miller fr...