Submit a Manuscript to the Journal
Cataloging & Classification Quarterly

For a Special Issue on
Empowering Representations: Rethinking Surrogates from the Margins 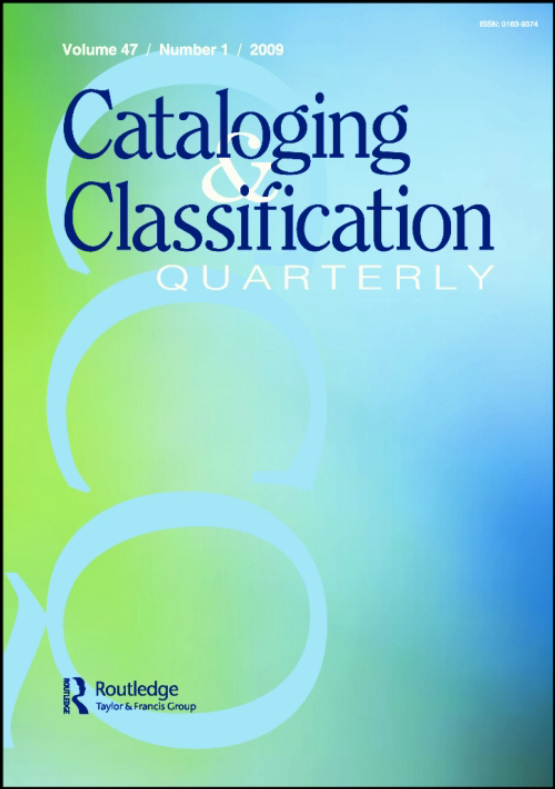 The process of describing and categorizing a tangible or intangible object for inclusion in the collection of a cultural heritage institution (CHI) typically involves creating a surrogate.  The surrogate represents the acquired item, its provenance, physical, intellectual, and other (e.g., temporal, spatial) origins and characteristics in accordance with established guidelines and standards, further informed by institutional policies and practices.  Working within that framework, the “cataloger” selects what aspects of the object to include in the representation.  Consistency and uniformity of interpretation and application across the range of physical and digital acquisitions held by a library, archive, museum, or other cultural heritage institution are hallmarks of the process of representation, and the creation of surrogates (an encoded record) that may be shared among similar institutions.  There is an authority assumed in the representativeness of the surrogate as determined and applied by information professionals and their institutions as informed by long-established standards and practices, both nationally and internationally.

But what if those representations are themselves open to interpretation, and candidates for the kinds of close scrutiny and substantial rethinking that have emerged with movements, such as Black Lives Matter, Idle No More/Indigenous Lives Matter, and issues relating to LGBTQI communities, persons with dis/abilities, ageism, gender inequality, poverty, people without housing, and others?  Cataloging and classification derive largely from 19th century approaches to representation, codified, standardized, applied, and embedded within legacy systems throughout the 20th century.  While technologies have allowed for some augmentation of surrogates by those who use the collections, the core, largely Western European values and applications have endured.  By providing access to collections and to the items and information associated with them, surrogates have served an important purpose.  Nonetheless, approaches to representation deserve a closer look from a contemporary perspective.  Informed by the lens of a social justice imperative, what do we preserve, what can we rethink, what does that look like, and how can and should it be done?

We seek submissions on theoretical and applied approaches to representation from scholars and practitioners within North America or internationally, whose work is focused on libraries, archives, museums, or other cultural heritage institutions.  We encourage, in particular, papers that address solutions – innovations, novel approaches, a fundamental rethinking of models or frameworks, inclusive engagements with communities and/or collections that have been traditionally marginalized, and reconfigured standards, tools, or technologies that signal transformative change to the process of representation and the surrogates that result.  How do or will rethinking theories or practices that have foregrounded certain worldviews to the exclusion or obscuring of others lead to change that is measurably responsive to, and inclusive of those who have been silenced, ignored, underserved, or otherwise diminished?

Lynne Howarth, Faculty of Information, University of Toronto, and Katharine Leigh of Ball State University will be guest editors for this issue, which is scheduled for publication in late 2022. Following a two-step process, authors are invited, first, to submit an extended abstract (1200-1500 words exclusive of references) of their paper to the guest editors for initial review.  If accepted, authors will then be asked to submit an anonymized full paper which will be blind reviewed by a minimum of two reviewers. Acceptance of the extended abstract does not guarantee acceptance of the full paper. Those whose full papers are ultimately recommended for publication will revise and finalize the manuscript following the timelines, described below.

Notification of acceptance of extended abstract and invitation to submit an anonymized full paper for blind peer review:  30 November 2021

Full papers for double blind peer review due by or before:  31 January 2022

Papers must follow CCQ Instructions for Authors and be submitted through ScholarOne Manuscripts.

Subsequent review of revisions, as required:  15 May 2022

All manuscript revisions completed by:  15 June 2022

View the latest tweets from CCQjournal

Read more
1
1
29 days ago
RT @BeginningCat: Call for news for @CCQjournal: As far as I’m aware the biggest current story in Cataloguing is the DCRMR constituency rev…

1
0
30 days ago
RT @BeginningCat: Call for news for @CCQjournal. Image shows the text that appears in the journal, updated with my contact details. You don…