Submit a Manuscript to the Journal
Educational Philosophy and Theory

For a Special Issue on
Education and the Social Contract 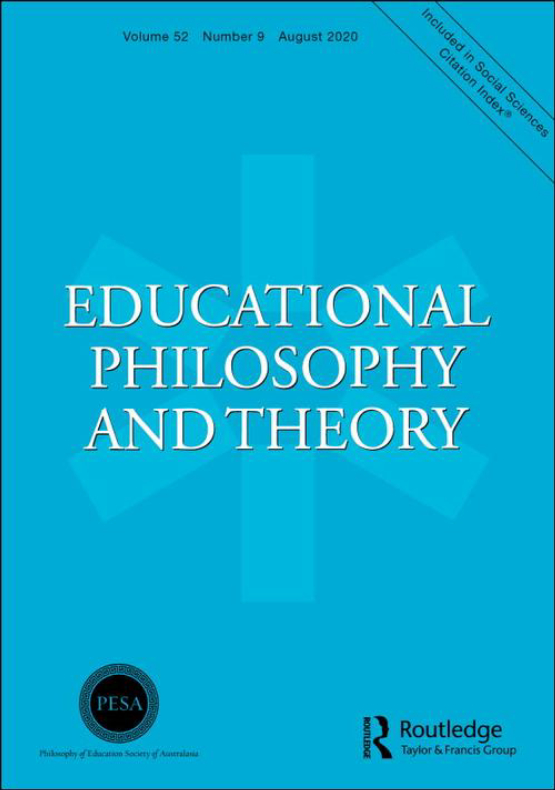 Education and the Social Contract

Both historically as well as conceptually, the idea of the 'social contract' represents one of the central metaphors of political theory: we can find it both in some of the 'classics' of the political tradition, e.g. with Grotius, Hobbes, Locke, von Pufendorf, Rousseau and Kant as well as with some of the most important contemporary authors including John Rawls, Carole Pateman, Charles W. Mills, David Gauthier, etc. In fact, the idea of the social contract remains an integral part of some of the central discussions in contemporary academic research, e.g. distributive justice, the minimal state, gender equality, racism, environmental justice etc. Interestingly enough, the revitalization of contemporary political philosophy initiated by John Rawls with his theoretical endeavor of ‘justice as fairness’ has been framed under the umbrella of the social contract.

The contemporary reactualization of the idea of the social contract has been the result of various factors including both theoretical 'production' on the one hand and various initiatives by some of the most prominent intergovernmental organizations, 'think-tanks' and civil society as well as by structures of institutional politics including national governments and political parties on the other. The growing inequality and the related deepening of the ‘opportunity gap’, the historical reversal in the flow of resources of modern liberal democracies and the decreasing intergenerational mobility as well as the devaluation of education within the neoliberal conception of meritocratic rationality call into question the legitimacy of the democratic political system and the fairness of its institutional framework. This and a panoply of other challenges [and related problems] simultaneously problematize the transformational function of education and the instrumental conception of its emancipatory potential.

This journal special issue of Educational Philosophy and Theory [entitled Education and the Social Contract] aims to bring together a set of contributions discussing the role of education in the social contract tradition, the mutual advantage conception of societal transformation and the importance of education as a common good.

About the Special Issue Editors

Dr. Mitja Sardoč is senior research associate at the Educational Research Institute in Ljubljana (Slovenia) where he is member of the ‘Educational Research’ program. His research interests and expertise include philosophy of education, political philosophy and education policy. He is author of scholarly articles and editor of a number of journal special issues on citizenship education, toleration, equality of opportunity, radicalization and violent extremism, patriotism, the American Dream, neoliberalism and education, talents and distributive justice. He is Managing Editor of Theory and Research in Education [http://tre.sagepub.com/], Editor-in-Chief of the  Handbook of Patriotism, The Palgrave Handbook of Toleration, co-editor of The Routledge Handbook on the American Dream and editor of The Impacts of Neoliberal Discourse and Language in Education published by Routledge.

Professor Tomaž Deželan is professor of Political Science at the University of Ljubljana and its Assistant Secretary-General. Prof. Deželan is coordinator of American Studies PhD programme, is the president of the Expert council of the Centre of the University of Ljubljana for research and development of higher education, and acts as the president of the working group on employability of the Slovenian Rectors’ Conference. He holds a title of Jean Monnet Chair for citizenship education and advises a series of international organizations (EC, CoE, OSCE, International IDEA) and national governments (Slovenia, Croatia, Latvia, Czech Republic) in the field of youth, civic engagement and quality assurance. Prof. Deželan coordinated more than 17 basic and applicative research projects related to youth, teaching and learning, education policy, political participation, citizenship etc. funded by the European Commission, Slovenian national research agency and European Social Fund. He authored numerous scholarly articles, edited volumes and scientific monographs indexed in key academic database, several policy papers for governments and international organizations and contributed to several public policy documents (e.g. EU Council conclusions).

If abstracts are accepted, we will invite authors to submit full-length articles for peer review. Up to eight abstracts will be selected for development into an article for the special issue. Papers should be approximately 6,000 words in length, including references, tables and appendices. Final acceptance of manuscripts will be subject to peer review.

View the latest tweets from PESAustralasia

We're also excited to announce that after her visit to Australia, Rosi Braidotti will be joining us at the University of Auckland on March 14th! 1/ https://t.co/DIPcdxhL5...

0
3
17 hours ago
RT @AliJMitchHT: 🌟 A fantastic opportunity for secondary school pupils in S5/S6 🌟 A brand new @BERANews School Research Award. The 2023 the…

19
0
yesterday
RT @herdsa_conf: A reminder that the deadline to submit your abstracts for #HERDSA2023, is only a week away! For information and to submit…