Submit a Manuscript to the Journal
Dynamics of Asymmetric Conflict: Pathways toward terrorism and genocide

For a Special Issue on
Militant Accelerationism 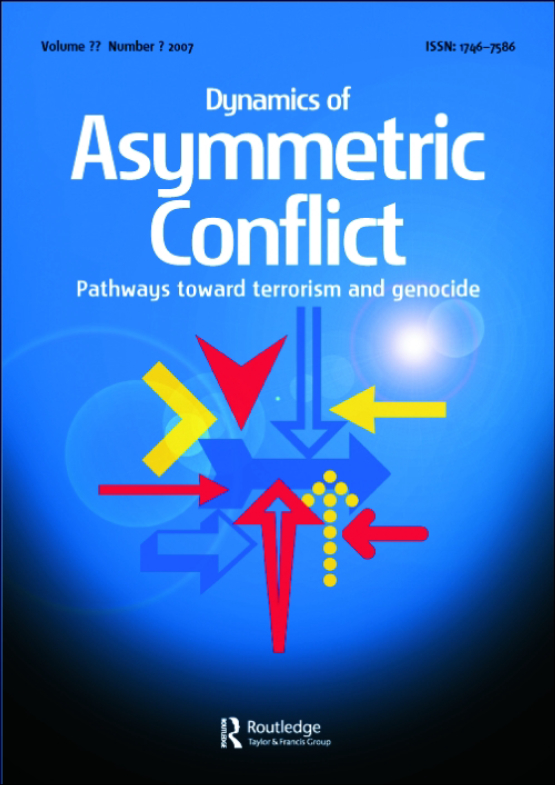 In recent years, actors aligned with accelerationist movements have committed numerous acts of violence, and several accelerationist groups have been designated as terrorist entities by governments around the world. As such, accelerationism is one of the most pressing concerns in the evolution of political violence and terrorism today. Dynamics of Asymmetric Conflict seeks papers that analyze the emergent trends and niche cultural components in the study of militant accelerationism. Matt Kriner, Jon Lewis, Michael Loadenthal, and Alex Newhouse will guest edit the issue.

The articles should either directly focus on militant accelerationism or tie ancillary topics back to accelerationist activity in analyses of how the phenomena has evolved and where it is headed. In particular, the journal seeks articles that provide insights into how accelerationism manifests in various social milieus, how it has innovated the tactics of terrorism, and how it presents a unique threat to liberal democracy.

Submissions can take national, international or transnational approaches. Preference will be given to papers that focus on the interplay between ideological strains of accelerationism beyond neo-fascists, the role of Western esotericism, and analyses on accelerationist narratives and communications strategies.

Potential topics include but are not limited to:

Interested authors are encouraged to submit abstracts of between 300 and 500 words to [email protected] before Friday, May 30, 2022. Authors will receive immediate confirmation of receipt and will be notified of the decision to submit a full article by June 15, 2022. Authors of accepted abstracts will then be invited to contribute articles of up to approximately 8,000 words, inclusive of abstract and references. Authors who have not submitted abstracts can also submit full articles for consideration at the final submission deadline. However, authors that submitted abstracts in advance will get priority consideration in putting the issue together. All articles must be submitted through the Journal’s Submission Site.

View the latest tweets from DACJournal

Read more
3
0
over a year ago
Last tweets from @ginaligon on thoughts of being the DAC editor for past four years: coolest thing Clark McCauley did for this journal was allowing ANY citation format. E...

3
12
over a year ago
RT @goliathSchon: New article @DACJournal with Yehuda Magid on how pro-government militia ethnic relationships affect violence against civi…

1
0
over a year ago
Readers: finally sat down and reviewed submissions from last month. We have some WILDLY awesome manuscripts coming up: Columbia, repression, protests, and more! Stay tune...