Submit a Manuscript to the Journal
Labour & Industry: A journal of the social and economic relations of work

For a Special Issue on
Domestic Violence and Work: Theory, Policy and Practice 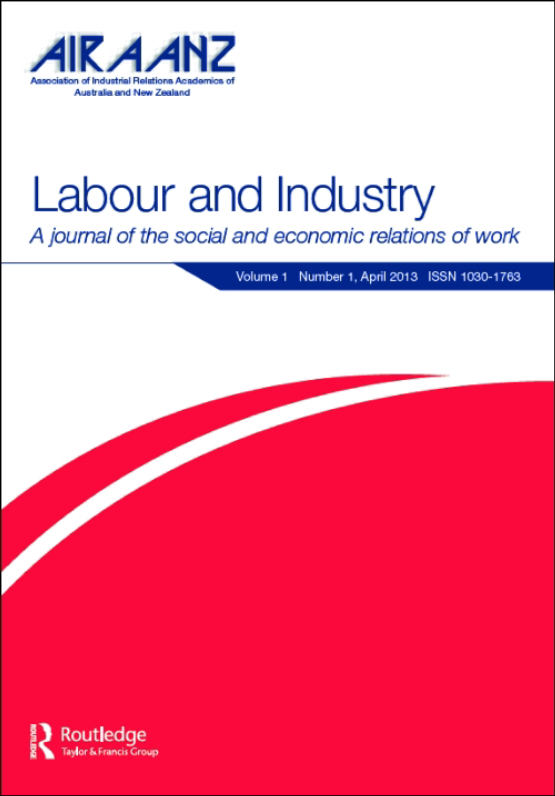 Domestic violence is internationally acknowledged to be a widespread, devastating social issue underpinned by gender inequality (World Health Organisation, 2009). Activists and scholars have additionally made a strong case that an intersectional approach is vital as the experience of domestic violence and the institutional response is shaped by race, sexuality, and class (etc) as well as gender (Fluri and Piedalue, 2017). Domestic violence is, then, intertwined with our identities as well as social and institutional power. Accordingly, ending domestic violence requires a whole of society approach. Only in recent decades, however, have workplaces become situated as having a role in this collective response (Weatherall et al., 2021). In some countries, such as Aotearoa New Zealand, this role has been codified in legislation for paid leave and flexible working arrangements. In many other contexts, workplace domestic violence support is often unpaid or missing entirely. Nevertheless, a growing number of workplaces go beyond minimum requirements, citing both a moral imperative to support victims (de Jonge, 2018) and a business imperative to minimize the massive financial costs of domestic violence (Kahui et al., 2014).

The business and the moral cases for workplace responsibility sit uncomfortably with one another. On the one hand, workplaces offer novel industrial opportunities to further education about the realties of violence and redress the effects and causes of domestic violence. Workplace domestic violence policies can offer sometimes life-saving access to healthcare, legal advice, and changes to living arrangements as well as economic security (McFerran, 2010). If implemented effectively, such policies can be part of a whole-of-organisation initiative to redress gender inequality or part of broader employee well-being or CSR initiatives. On the other hand, workplaces and the labour market frequently reinforce gendered (and other) inequalities (Rubery and Hebson, 2018) which compound domestic violence. Crucially, workplaces themselves must be recognized as gendered (Wajcman, 2000) and part of gender regimes which cut across economy, polity, civil society, and institutionalized violence (Walby, 2020). The role of workplaces must therefore be situated within a multi-lateral approach to fully appreciate or imagine the possibilities of redressing violence in and through organisations.

The industrial response to domestic violence remains in its infancy globally and international standards have yet to be widely adopted and implemented (International Labour Organisation, 2019). While evidence demonstrates that workplaces can play an important role (MacGregor et al., 2019), the extent and shape of this role is nascent and scholarly knowledge of the subject remains scarce. Scholars and practitioners have an opportunity to conceptualize the relationship between domestic violence and workplaces in a way that opens novel industrial pathways to social change. Such work must consider the connections between the gendered, socio-political nature of domestic violence and the industrial conditions necessary to achieve the gender equity objectives underpinning workplace domestic violence support.

Topics may include the following themes (but are not restricted to):

Given the sensitive nature of the topic and the potential vulnerability of participants, contributors are encouraged to contact the guest editors to discuss the suitability of their work for this issue.

We particularly welcome insights from practitioners, policy analysts, unionists, and activists undertaking work or research in this area.

View the latest tweets from labour_industry

How can we push progress forward more quickly on #gender #payequity? In their new paper, @ak_pennington and Megan Wenlock of @CPSU_Vic examine how changes to sectoral #b...

Read more
2
2
3 days ago
CALL FOR PAPERS Special issue on "Research methodologies for work, workplaces and employment: Methods that make a difference, are engaging and can enable impact" First ...

1
1
13 days ago
RT @Mihajla_Gavin: *1 month left to get your submission in* 🏃‍♀️🏃‍♂️ The Call for Papers is still open to submit to a @labour_industry Sp…