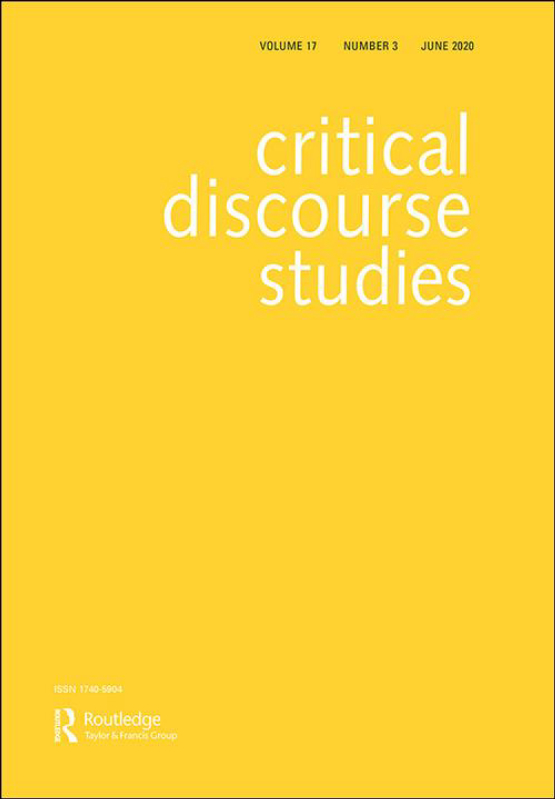 Since being coined by the African-American feminist legal theorist Kimberlé Crenshaw, intersectionality has increasingly been taken up as both an ontology and a hands-on framework on a global scale. The intersectional approach is acknowledged for its potential to map the relation between the different systems of oppression which construct our multiple identities and our social locations in hierarchies of power and privilege. In parallel, critical discourse studies has been consolidating as a form of linguistically-oriented, critical social research, with a special interest for asymmetries between participants in discursive events and their unequal capacity to control how texts are produced, distributed and consumed.

This Special Issue will explore the convergence between CDS and intersectionality as a theory, method and practice for the exploration of different crossroads of inequality and oppression. By investigating the junctures between critical discursive and intersectional approaches, this Special Issue intends to contribute to the development of a critical research framework that enables the acknowledgment of the profound ways in which discursively, institutionally and/or structurally constructed sociocultural categorizations interact and produce different kinds of societal inequalities and unjust social relations. These, in turn, can be analysed in terms of the mutual and intertwined processes of resistance and transformation that arise out of them.

This Special Issue invites papers that engage with theoretical and methodological reflections on the relationship between CDS and the intersectional approach. These reflections may include (but are not limited to) intersectional readings of CDS as theory, and their potential ability to foster a renewed self-consciousness of the more parochial aspects of CDS concepts, categories, assumptions and frames of reference. In parallel, they may also explore ways for intersectionality to stay ‘critical’ in its multiple processes of recontextualization, given its nature of a successful global ‘buzzword’ and its ability to travel well beyond its origins in the African-American feminist community.

This Special Issue also welcomes original, empirical, up-to-date case-studies from different global contexts in which an integrated CDS / Intersectional approach is operationalized. This can be across any social and national context as well as different angle and themes, including (but not limited to):

This Special Issue aims at fostering a broader and more fruitful critical discursive focus on the lived-experiences of subordinated and/or less-represented social actors who continue to see transforming social institutions as urgent and necessary, including indigenous peoples, Latinx, LGBTQ people, differently abled people, religious and ethnic minorities, and stateless people, among others.

Abstracts should preferably be extended (c.a. 500-800 words, excluding references) and should clearly specify theoretical and empirical gaps that the researcher is addressing, a brief description of the methodology used, results obtained, the expected contributions to theory and practice, and the conclusion resulting from the study. Please include five keywords and a short author bio.

Articles should be original contributions of 8000 words maximum (inclusive of abstract, references, tables, figure captions, footnotes, endnotes) and should follow the instructions for authors available on the CDS homepage.

Please note that accepted articles will go through a blind review process as per CDS guidelines. The title of the SI may be modified at later stages.

View the latest tweets from CritDiscStuds

Read more
0
1
yesterday
RT @genderedform: Just delivered to my door! Happy to see it in print (and in such good company)! A huge thanks to all those involved in th…

5
0
yesterday
RT @Kurt_Sengul: 🚨New publication from me in @CritDiscStuds 🚨 In this bad boy I discuss the appalling “It’s Ok to be white” motion made by…