Submit a Manuscript to the Journal
Changing English

For a Special Issue on
Resisting (in) English? 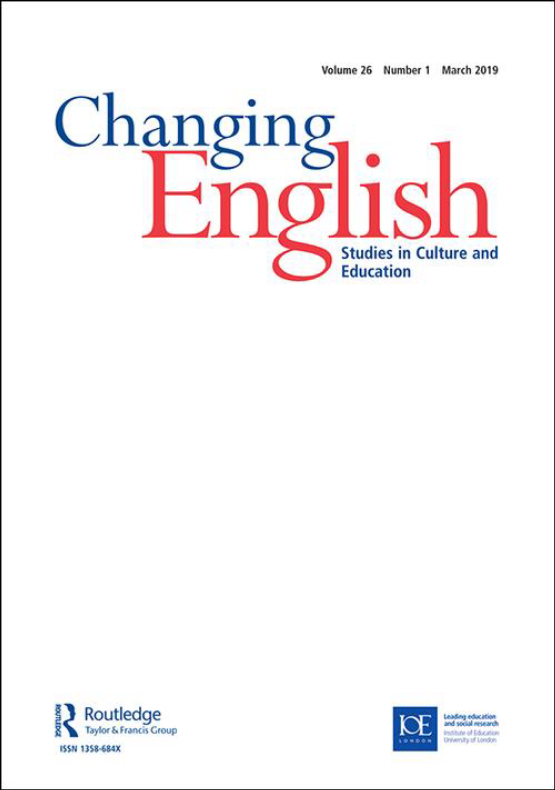 ‘My quarrel with the English language has been that the language reflected none of my experience. But now I began to see the matter another way … Perhaps the language was not my own because I had never attempted to use it, had only learned to imitate it. If this were so, then it might be made to bear the burden of my experience if I could find the stamina to challenge it, and me, to such a test.’ (James Baldwin, in Mair 2003)

This special issue of Changing English (Volume 30, issue 3, to be published in September 2023) invites you to reflect on the ways teachers and their pupils around the world might appropriate English for their own purposes, not just narrowly pragmatic ones, such as those emphasized by neoliberal policy blueprints about the importance of English for the economy, but as a means for young people to grapple with dimensions of their experience and identity through language. Our aim is to explore the potential of English to open up possibilities for confronting and transcending the parameters of neoliberal blueprints, drawing on the work of English educators in both ostensibly Anglophone settings and settings where English is a second/foreign/additional language. We are especially interested in accounts of pedagogic exchanges that explore the imaginative and intellectual potentialities that might be realised through ‘resistance’ to the colonial legacies of English (Pennycook 1998) and the pressures of uniformity and standardisation of standards-based reforms, including what might be gained by affirming the diversity of Englishes and bi- (or multi-)lingualism.

Changing English regularly features articles that highlight how the exchanges in which young people engage in classroom settings in multicultural (and multilingual) contexts exceed the sterile mainstream model of language education. Eliza Kogawa (2021), for example, has recently shown the capacity of primary school children in the UK to explore the differences between standard English (the English privileged by schooling) and other varieties of English, as well as their experiences of the interface between English and the languages spoken at home. But a larger field of inquiry is also pertinent here, namely the work done by English educators in settings other than Anglophone ones to find ways in which their pupils might appropriate English in authentic ways that allow them to explore their life worlds, when it becomes possible, as Hamid Mirhosseini and Azadeh Emadi express it, to feel that ‘words belong to ourselves’ (Mirhosseini and Emadi 2022).

Standards-based reforms seek to suppress the rich worlds of language and experience revealed by these and other essays written by English educators. They attempt to compel English language educators to implement uniform pedagogical practices that severely compromise their capacity to respond to the needs and interests of their students as they attempt to find and own words that might represent their experience of the world they find around them (Freire and Macedo 1991). They deny the legitimacy of the efforts by children to represent their experiences through drawing on both English and the languages of their families and communities by imposing a sterile model of ‘correct’ English – the English of ‘the idealised native speaker’, as Constant Leung, Roxy Harris and Ben Rampton (1997) put it – that paradoxically nobody actually speaks. Yet it is also important to recognise that such practices are not only a result of government policy, but arguably also reflect a privileging of ‘native speakerism' (Holliday 2006) and so-called ‘mother tongue’ education that is inherent in the ‘project’ of English (Kress 2006), despite the efforts by English educators to ‘reimagine’ what they do. So we are also inviting contributions that might tease out the complexities of the ideological work that English (Doecke, Mirhosseini, Al-Issa, and Yandell 2019) has performed and to consider whether English serves to enable educators to be responsive to the languages and cultures of their students.

But whatever the burden of history, and whatever the constraints posed by neoliberal reforms in their efforts to close down the intelligence and the imagination, we remain convinced that the exchanges that actually occur within educational settings cannot ultimately be contained by reified traditions, prescriptions or indeed proscriptions. So in addition to essays that might explore the history and the larger socio-cultural and political contexts that variously mediate the teaching of English around the world, we are also keen to solicit rich accounts of pedagogic ‘praxis’, as well as narratives in which you explore your own experience of the interface between English and other languages from the ‘inside’. By ‘praxis’ we are referring not only to classrooms, but the rich array of activities – such as the production of teaching and learning resources or the formulation of more inclusive educational policies – that comprise the ‘project’ of English in various national settings.

We are indebted to Christian Mair, not only for James Baldwin’s reflections about being inside/outside the English language (these reflections are also cited by Chinua Achebe [1997], yet another writer who has explored the significance of being inside/outside English) but for the title of this special issue, which is the title of the first section of this engaging collection of essays: The Politics of English as a World Language: New Horizons in Postcultural Studies (Mair 2003). The distinctive character of this volume consists in the way it brings together people working respectively in the fields in linguistics and postcolonial literary studies in order to develop ‘a discourse-based and dynamic model of varieties of English, which puts the context, the speaker and his/her intentions, and history back into the picture’, that affirms ‘the contextualized, situated appropriation of a language by a postcolonial community on its own terms and for its own purposes’ (p. xiii). By appropriating Mair’s title, we hope that this special issue of Changing English likewise transcends the reified categories and divisions (most notably that between EFL and English as so-called ‘mother tongue’) that have compromised educators’ attempts to recognize and support students in their efforts to appropriate English on their own terms and for their own purposes.

Make an impact in your field and submit to a special issue of Pedagogies, that aims to contribute to a deeper understanding of digital pedagogy, based on both empirical s...