Submit a Manuscript to the Journal
Administrative Theory & Praxis

For a Special Issue on
More than a game: Sport as a vehicle for public administration and management 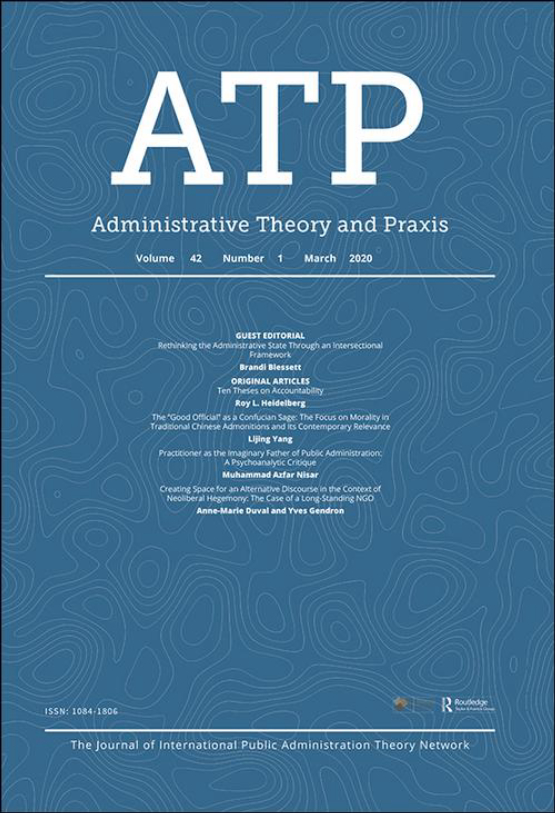 More than a game: Sport as a vehicle for public administration and management

Since 2020, the world has experienced continued attacks against people of color, an ongoing global pandemic, the beginning of an unprovoked war on Ukraine by its neighbor Russia, a tumultuous U.S. presidential election and attempted insurrection, increased effects of global climate change, and a rise in right-wing populism across the globe. The inability of the administrative state to address these challenges quickly, effectively, and equitably can be charged with a host of political and administrative changes (Thomas & Levine Daniel, 2022). These include the hollowing out of the administrative state with increased reliance on third parties to carry out government operations (Milward & Provan, 2000), the use of austerity policy to unfairly privilege economy over equity (Clark & Nickels, 2021), and a questioning of what the role of the administrative state should be in a time of turmoil and post-truth (Catlaw & Eagan, 2021).

As administrative power appears to wane, non-state actors have begun to fill the void, including wealthy and powerful individuals, nonprofits, corporations, and even sport organizations. With the emergence of sport entering public administration literature as a vehicle to discuss the failure of the administrative state (Thomas & Wright, 2021; Wright & Thomas, 2022; Thomas & Levine Daniel, 2022), now more than ever marks the appropriate time to explore how sport is influencing the public administration and public management fields.

How can we use sport as a lens through which we analyze current theoretical debates in public administration? From the days of the ancient civilizations of Greece and Rome and through the globalization of Western and non-Western societies of today, athletes maintain a significant role in shaping public opinion of several key topics due to the role of sports as a purveyor of culture and public identity (Houlihan, 1997; Tomlinson & Young, 2006; Reid, 2017). Sport often evokes a feeling of teamwork, group identity, and personal development, whether physical or emotional. Indeed, the International Olympic Committee (IOC) states that the “three values of Olympism are excellence, friendship, and respect”. When comparing the pillars of public administration (efficiency, economy, effectiveness, and equity), we see parallels to the idea that sport can create bridges between peoples, encourage hard work, and celebrate the ways in which humans are more similar than not.

From small town leagues to global federations, sport organizations are an expression of values and a very public display of public good allocation (Sam 2009). Sport can also create, enhance, or modify collective identity but also emerge as a societal trigger point and be used as a political tool to divide by placing people in rigid boxes from which they are not allowed to express their true selves. We see this concept illustrated as transgender athletes attempt to participate at local, national and international levels and how that participation has called into question the role that sport has on gender identity norms and laws.

This call encourages submissions that use sport as a foray into the public administration and public management literature arenas. We are especially interested in the ways in which sport is used as a lens to further theorize what public administration is and who is served. The list of the following topics are a sample of just a few that this special issue wishes to address. It is not an exhaustive list, but rather serves as a way to get the conversation started:

The goal of this call is to cast a wide net of perspectives on the issues proposed. To submit a proposal, please email a 500-word abstract (with references not included in word count) outlining the manuscript’s contents and relevance to this call. Abstract emails should go to both special issue editors (addresses below). Please include the names and affiliations of all author(s). All submissions must be received by August 15, 2022. Abstracts for research articles, Dialogue, and book reviews will be accepted.

All submissions selected by the editors will be invited to submit a full article through the Administrative Theory & Practice portal, which will then be subject to the journal's traditional double-blind peer review process. An invitation to formally submit an article does not guarantee publication. If you have any questions about potential submissions or to discuss paper ideas before proposal submission, please contact the special issue editors, Amanda D. Clark, PhD at [email protected] or Blair Thomas, PhD at [email protected].

View the latest tweets from journalatp

As @scopus data come out, ATP is continuing to make great strides! We are trending up, and hope people continue using and citing the important work in the journal! https:...

4
16
26 days ago
Our latest issue is special issue on dismantling White supremacy led by @SeanMcC_PA and @urbanrambl_. Check out their introduction here: https://t.co/nVslNUUwl5

Read more
19
34
35 days ago
Abstracts for our latest call for papers are due April 15! Don't miss it - a great call on problematizing Whiteness in public administration! https://t.co/aVblGgdawW Con...

Read more
11
14
84 days ago
Our latest @Scopus CiteScore is out! Check out how we are growing! If you have an interest in administrative theory, conceptual scholarship, or interpretive methods, send...