Submit a Manuscript to the Journal
Venture Capital 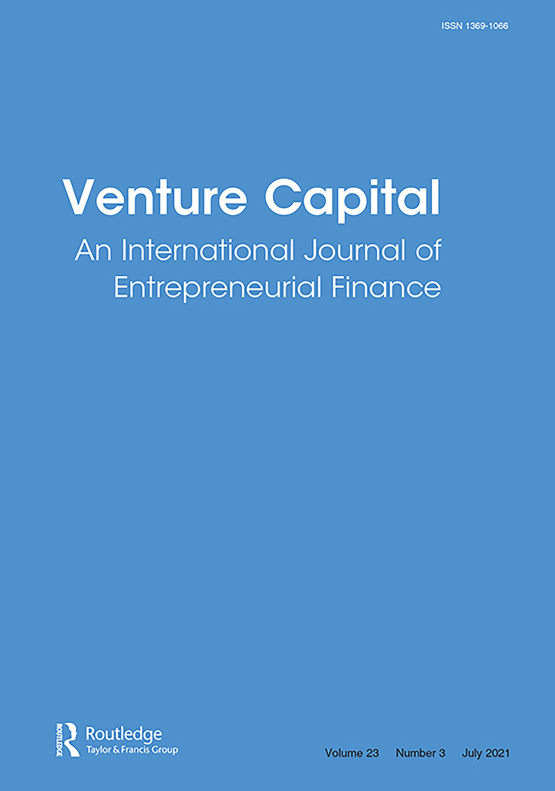 In recent years there has been an emergence of alternative sources of early-stage finance, which are radically changing and reshaping the start-up ecosystem (Bonini and Capizzi 2019). The concept of early-stage finance has attracted particular attention from universities around the world that have taken measures to support early-stage finance by either directly providing funding for start-ups or by creating a favourable environment and frameworks that effectively stimulate private investments and channel high-risk financial resources to university start-ups.

This growing trend reflects both changes in the supply of start-up finance, as new funding providers (e.g., accelerators, university venture capital [VC] funds, crowdfunding platforms, and others) enter the market, and changes in the demand for such finance from students and university-based start-ups, which face important challenges in raising capital from traditional sources. Also, debt financing is not an option for seed and early-stage companies, as they lack assets that may serve as collateral (Grilli and Murtinu 2015; Jeng and Wells 2000; Knockaert et al. 2010; Revest and Sapio 2012). VC funds are often hesitant to invest at a very early stage due to high transaction costs, information asymmetries, and uncertainties concerning the successful transfer of highly innovative technologies to a marketable product or service (Carlsson and Mudambi 2003; Clarysse and Moray 2004; Colombo, Grilli, and Verga 2007; Knockaert et al. 2010; Lockett, Murray, and Wright 2002; Munari, Sobrero, and Toschi 2017).

These challenges are further exacerbated within the academic sector, as the different nature of the organisational culture and motivations of different players involved in academia are unique, namely: university scientists are driven firstly by promotion incentives (Berbegal-Mirabent and Sabaté 2015; Ryan and Berbegal-Mirabent 2016) and secondarily by financial gain; whereas University Technology Transfer Offices have as their primary motivation the protection and marketing of the intellectual property of the university, with financial gain also playing a role in this process (Cartaxo and Godinho 2017).

Nevertheless, the potential importance of university-established or university-led funding mechanisms in supporting start-ups is four-fold. First, they increase the supply of finance through direct subsidies, equity investments, university-affiliated fund investments (Atkinson 1994; Corsi and Prencipe 2018; Herber et al. 2017; Widding, Mathisen, and Madsen 2009), and proof-of-concept programs (Munari et al. 2016). Second, university funding is often seen as a positive signal to attract external funding, as a financial investment from the parent research organisation has a positive effect on the growth of the company (Bock, Huber, and Jarchow 2018; Gubitta, Tognazzo, and Destro 2016; Munari, Pasquini, and Toschi 2015). Conversely, Munari, Pasquini, and Toschi (2015) found that spinoffs receiving university seed funds have a lower likelihood of IPO, and Croce, Martí, and Murtinu (2013) observed that university funds in the U.S. seem to be outperforming those in Europe, perhaps due to their disciplinary and later-stage spinoff focus. Third, university funding supports the overall entrepreneurial ecosystem, as university-led seed funds are recognised as a critical entrepreneurship ecosystem element and have a positive impact on regional competitiveness (Algieri, Aquino, and Succurro 2013; Brown 2016; Degroof and Roberts 2004; Guerrero et al. 2014; Jacob, Lundqvist, and Hellsmark 2003; Jefferson et al. 2017; Mustar and Wright 2010; O’Shea et al. 2005; Pierrakis and Saridakis 2019; Pique, Berbegal-Mirabent, and Etzkowitz 2018; Swamidass 2013). In this respect, Wright et al. (2006) posited that these funds are needed because venture capitalists do not invest in early-stage companies. Finally, such funding mechanisms increase research productivity (Cattaneo, Meoli, and Signori 2016), support intangible goals of the university (e.g., building an entrepreneurial culture), help strengthen networks with regional stakeholders (Gubitta, Tognazzo, and Destro 2016; Hayter et al. 2018), and also improve founder’s social networks and capabilities to get external funding (Huynh 2016; Soetanto and van Geenhuizen 2015).

Against this background, this Special Issue is interested in papers, which explore the following questions, among others:

In this special issue, we define university start-ups as entrepreneurial ventures that have been created by university staff, graduates, or students.

We welcome submissions on these and other issues arising from the rise of the university start-up funding phenomenon from a wide range of disciplinary and methodological perspectives. Manuscripts should be submitted via Manuscript Central through the journal’s website. Authors should select the special issue from the dropdown menu. Papers should be prepared according to the format specified for the Venture Capital: An International Journal of Entrepreneurial Finance.

The timeline for the Special Issue is as follows:

2
0
4 hours ago
RT @ICSB: Discover ICSB's most read 2021 articles in the Journal of Small Business Management and the Journal of the International Council…

2
0
4 hours ago
Contribute to a special issue of the Journal of Marketing Management, that is inviting submissions of service research in an age of crises, that contributes to (re)buildi...

Read more
0
0
8 hours ago
Share your research in a special issue of the Journal of Chinese Economic and Business Studies, which will focus on offering an evaluation of BRI investments in sub-regio...