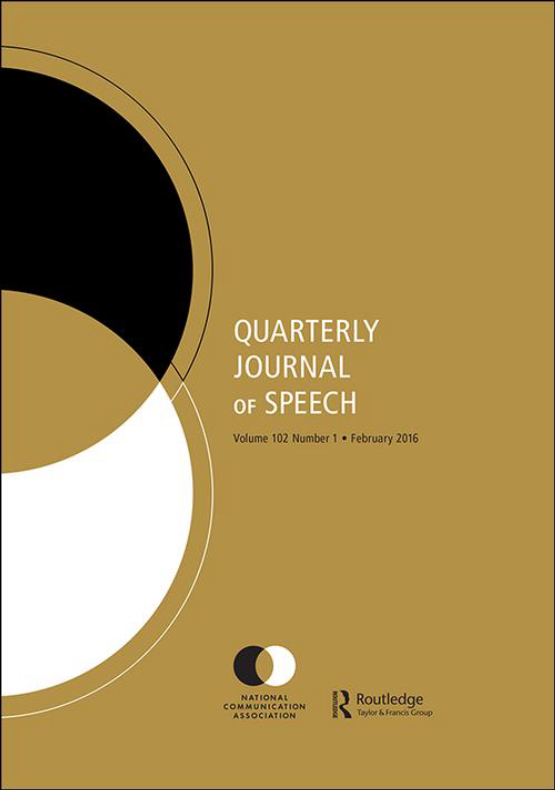 Setting a vision for the Quarterly Journal of Speech’s content and direction means addressing the important problems in our discipline related to white supremacy, colorism, misogyny, class standing, ability, U.S.-centered thinking, anti-Islamic sentiment, anthropocentrism, ongoing colonialisms, and many forms of ethnocentrism.  Calls for greater representation of marginalized perspectives in our discipline have persisted for decades, but have reached critical junctures in recent years. The controversy over NCA’s Distinguished Scholars is but one instance among numerous others that have left many folks in our field feeling disenfranchised by organizations such as NCA and journals such as QJS.  Case in point:  recent forums and conversations in QJS, CC/CS, and other disciplinary journals indicate a deep, urgent need and hunger for rhetorical and critical scholarship that address our current contexts and cultural milieu.  These discussions represent just a few of the ongoing conversations about experiences of exclusion, marginalization, and microaggressions in rhetorical studies.

We envision then, that QJS will be a scholarly forum where authors address a wide range of social and political issues and how they function within, through, and beyond rhetoric/language.  We face persistent ableism, environmental catastrophes, wars and attempted/successful exterminations of various peoples, globalization/capitalism, the slow violence of climate change/food insecurity/toxins, anti-Black, anti-Latinx, and anti-Asian racism, the rise of white supremacy and nationalism, deeply problematic immigration policies and xenophobia, oppression of queer and non-gender conforming folks, erasure of Indigenous peoples and cultures/languages, anti-Islamic and anti-Palestine sentiments and violence, as well as many other social justice issues. While topics that generally focus on rhetoric in method, theory, and/or inclusion continue to be appropriate for this journal, we especially seek submissions that engage matters and contexts that go beyond the traditional scope of this journal, particularly beyond U.S. American understandings of the world, and especially in the form of anti-oppression research frameworks.  Submissions that address the issues listed above, along with nation- and identity-making in the Global South, decoloniality, decolonization, settler colonialism, Indigeneity, critical race studies, #BlackLivesMatter, #MeToo, whiteness, gender troubles, ecocultural rhetoric, ability studies, environmental (in)justices, and related theories and themes are welcomed and encouraged.  In addition, alternative or creative submissions that push the boundaries of how we understand traditional scholarship in form, function, and expression might also be considered for publication. We want to encourage forms that challenge hegemonies and oppressions, particularly academic research and writing. Please feel free to contact us with ideas for submissions to discuss what that might look like.

The Quarterly Journal of Speech (QJS) is a peer-reviewed publication of the National Communication Association. QJS publishes original scholarship and book reviews that take a rhetorical approach to diverse texts, discourses, and cultural practices through which public beliefs, norms, identities, institutions, affects, and actions are constituted, empowered, enacted, and circulated. Rhetorical scholarship traverses and mobilizes many different intellectual, archival, disciplinary, and political vectors, traditions, and methods, and QJS seeks to honor and engage such differences.  Accordingly, QJS welcomes the full array of scholarship produced under rhetoric’s broad purview, including work that advances and enriches longstanding traditions in rhetorical theory and criticism, as well as research and writing that maps new frontiers.

The full aim and scope of the journal, as well as submission instructions, are available here. Prospective authors should attend closely to those specifications, including manuscript preparation, style, and word count limits. Essays should be submitted in MS Word, should be approximately 9,000 – 11,000 words long (manuscripts longer than 11,000 words will be returned without review), and should adhere to the most recent edition of a citation manual (e.g., the Chicago Manual of Style, the American Psychological Association Publication Manual, or the Modern Language Association Style Manual).  If accepted for publication, the final version must be in the Chicago Manual of Style bibliographical endnote format.

Manuscripts submitted to QJS must not be under review elsewhere or have appeared in any other published forms. Upon notification of acceptance, authors must assign copyright to the National Communication Association and provide copyright clearance for any copyrighted materials. Questions about the journal, its editorial policies, or the submission process can be directed to the editor.

The University of Texas at Austin, [email protected]

We aim to make publishing with Taylor & Francis a rewarding experience for all our authors. Please visit our Author Services website for more information and guidance, and do contact us if there is anything we can help with

@natcomm
NCA members, it’s your turn to tell us what you think and how we can make future conventions even better. Take our brief survey—whether you attended the convention or not. The survey includes questions about future virtual convention participation: https://t.co/b10mHtpaK9. #NCA22 https://t.co/EESQ2EnaXY