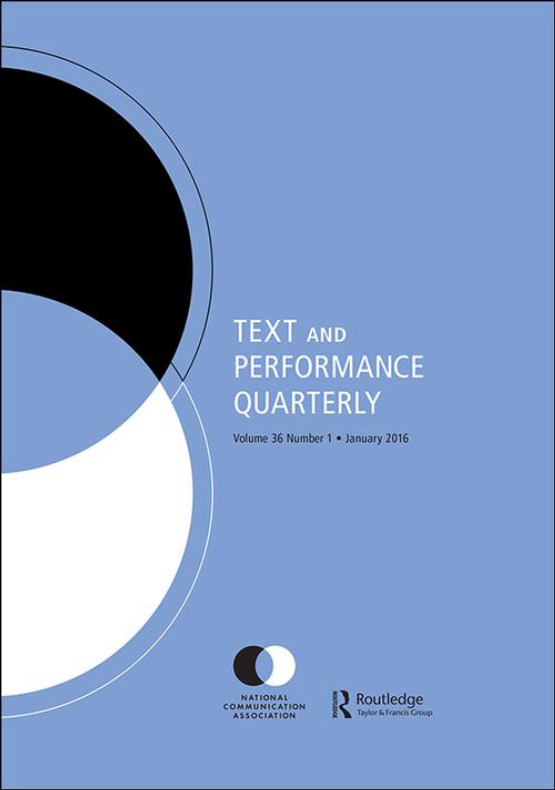 Under my editorship, authors interested in publishing in Text and Performance Quarterly (TPQ) should center performance—as it is understood in performance studies traditions—to critique, expand upon, and intervein in scholarly conversations that have taken place in the journal over the past forty-plus years. Dwight Conquergood likened performance to “a caravan: a heterogenous ensemble of methods and ideas on the move” (140).  Essays in TPQ should reflect and respond to this movement in performance studies. If scholarship, as the axiom goes, is a disciplinary conversation, it is imperative that TPQ fully reflects the broadly defined heterogenous ensemble that comprises performance studies globally. To this end, I invite authors to submit essays that theorize about performance in relation to its myriad social, cultural, naturecultural, and aesthetic manifestations around the globe. In addition to essays that meet the general aims and scope of TPQ, I welcome essays that speak to the following five, often intersecting, areas:

Global perspectives on performance: Essays about performance from artist-scholars who study and make performance as situated within their respective geographic regions, nations, culture groups, climates, and landscapes.

Performance as central to activism, identity, anti-racism, decolonization, and social justice: Essays that demonstrate the central role of performance and the performative in intracultural and intercultural contexts. Such essays address how performance is practiced as a means to activate, mediate, or undermine relationships between power and discourse. Representative essays that meet these criteria by authors such as Bryant Keith Alexander, Sonia Arsham Kuftinec, and Soyini Madison are featured in Judith Hamera’s edited book Opening Acts: Performance in/as Communication and Cultural Studies.

The ontological turn in performance: Essays wherein authors theorize about performance at the nexuses of natureculture to explore the broad scope of perspectives associated with the posthumanities. This includes theoretical approaches such as object-oriented ontology, actor network theory, new materialism, vital materialism, and Indigenous materialism. In such essays, performance is theorized as a naturalcultural phenomenon. For an overview of this practice see Brisini and Simmons’s editorial in TPQ entitled “Posthuman Relations in Performance Studies.”

TPQ also features a “Performance Space” section that documents performances and situates and critiques them in relation to performance studies theory and praxis.

Since its inception, the Performance Space has served scholar-artists as a venue wherein the “integration of the actual performance work done by performance studies scholars [and the] critical assessment of that work” (Dillard 84) is presented for public consumption. In this regard, the Performance Space has been a hallmark section of TPQ, and continues to assert the central epistemic and methodological place of live, creative performance in international performance studies research. With this imperative in mind, we understand our responsibilities as co-editors to entail not only preserving this important disciplinary space and function, but also to mandate innovation within the form, in response to contemporary theoretical discourses, performance practices, and social exigencies. To this end, we encourage submissions along the following axes:

Performance Scripts and Criticism: The Performance Space will continue to accept the submission of scripts/scores from original, live, staged aesthetic performances (in whole or in part). These scripts may represent any number of aesthetic traditions or formats, including solo performance, group/cast performances, devised performances, performance art, dance, hybrid forms, etc. These scripts should be reformatted for publication, with relevant stage directions, supporting visual materials, and other components to aid in reader comprehension and engagement. The author will typically provide a short framing essay that contextualizes the performance and offers theoretical and/or methodological grounding for the performance script.

In addition to the original script, potential authors are responsible for arranging (at least) one scholarly critical review of their work (by an outside party), to be published alongside their script.

Multimedia: TPQ is capable of hosting multimedia files (photographs, audio, and video), which may optionally accompany submissions. Potential authors should carefully craft these supporting materials, and recognize that the aesthetic quality and scholarly relevance of these multimedia materials will be evaluated as part of the peer review process, and may help or hinder any given submission’s chance of acceptance. For more information on this process, please see the following link: https://authorservices.taylorandfrancis.com/enhancing-your-article-with-supplemental-material/

Longley, Alys. “‘Skeleton Boat on an Ocean of Organs’ and other Stories: Understanding and Evoking Posthuman Relations through Site-based Dance, Somatic Practices, Performance Writing, and Artist-books.” Text and Performance Quarterly 36.4 (2016): 229-49.

We aim to make publishing with Taylor & Francis a rewarding experience for all our authors. Please visit our Author Services website for more information and guidance, and do contact us if there is anything we can help with

@natcomm
Sitting pretty in her father Khairul’s arms, we couldn’t pass up an opportunity to welcome smiling four-month-old Aleena to her first NCA convention. A year ago, @KhairulIslam11 and a pregnant @NajmaAkhther, Aleena’s mother, attended the 107th annual convention in Seattle, WA. https://t.co/dpS5jtt6iN