Taylor and Francis is pleased to announce the appointment of Consumption Markets & Culture’s new Editors – Alan Bradshaw and Joel Hietanen.

Professor Alan Bradshaw is Head of the Marketing Department at Royal Holloway, University of London and is long committed to cross-disciplinary, philosophical and radical thinking in marketing and consumer culture.  He served for the past ten years as Associate Editor for both the Journal of Marketing Management and the Journal of Macromarketing.

He previously guest edited a special issue of Consumption, Markets & Culture with Avi Shankar on the Production and Consumption of Music, and the issue is re-issued in book format. His other books include Advertising Revolution: The Story of a Song From Beatles Hit to Nike Slogan (authored with Linda Scott) and the Dictionary of Coronavirus Culture (edited with Joel Hietanen).

He previously worked at the University of Exeter and Stockholm University and he did his PhD at the Technological University Dublin.

His interests include authenticity myths and affectivity in technocapitalism and the dark side of desire in consumption from the perspective of Deleuze+Guattari and French poststructuralism in general. Methodologically he has a continued interest in videography and netnography. At University of Helsinki, he teaches critical approaches to consumer behavior and culture.

His recent work has been primarily focusing on the notion of the dividual and subjectivity in consumer culture marked increasingly by automation. As self-organizing machines increasingly continue to seduce us and draw for us the limits of our imagination of agency, we need novel ways to conceive of a general affective horizon and the potentials of participation in this age.

“We are not out to appease a discipline’s mainstream whims” Fuat Fırat declared in his first editorial, “We are here to be the medium that all those critical and challenging minds in all disciplines will seek out when they want to read something refreshing and new, something that is at the highest level of scholarship yet full of ground-breaking ideas and helpful to the reader in producing novel ideas of her/his own. We do not want CMC to be a journal for everyone in one single discipline. We want it to be a journal for many across many disciplines”.

This is the 25th anniversary of CMC’s launch. The journal has gloriously stayed true to its interdisciplinary roots, routinely publishing scholarship that hails from numerous fields but also articles that are themselves fundamentally interdisciplinary. Last year, under the stellar editorship of Dannie Kjeldgaard, CMC received just under 300 submissions and has continued to grow in terms of its general stature as well as formal measurements of impact. We are honoured and proud to inheriting the editorship and delighted to report that CMC is a tightly run ship kept to fine condition by its previous editors.

As new editors we regard ourselves as settlers on the terrain scoped out and developed by Fuat Fırat, Nikhilesh Dholakia and Alladi Venkatesh 25 years ago. We enjoy careers that are highly inter-disciplinary and we do not encounter obstacles as we publish critical and radical analyses. This privilege, nay basic right, is in no small part made possible by the instrumental role played by the original editors of this journal in widening the conceptual and infrastructural range of our subject. This journal, in other words, is foundational for the viability and trajectory of our careers and critical imagination.  We are honoured that the task falls to us to ensure that this journal continues to provide and develop this space for the emergence and dissemination of radical and philosophical thinking. 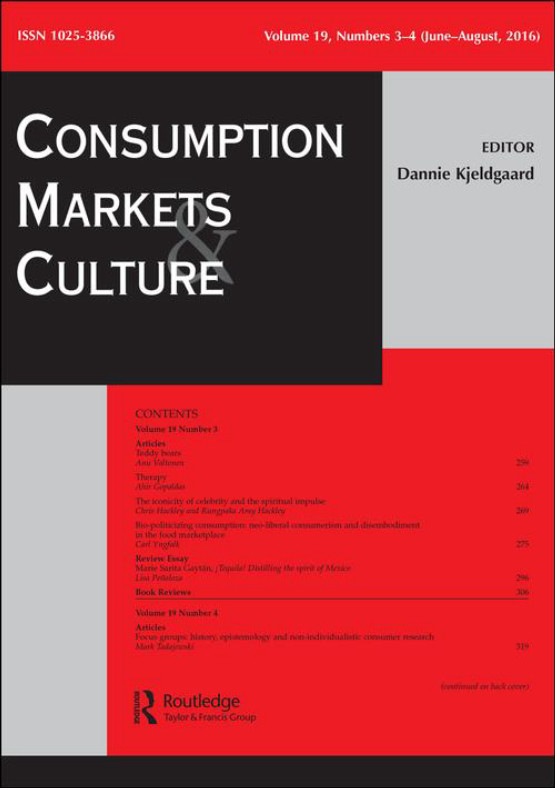 Consumption Markets & Culture (CMC) focuses on consumerism and the markets as the site of social behaviour and discourse. It encourages discussion of the role of management and organisations in society, especially in terms of production, consumption, colonialism, globalisation, business performance and labour conditions. Combining theories of culture, media, gender, anthropology, literary criticism, and consumption with analyses of business and management, the journal is international in its scope and iconoclastic in its aims.