We dedicate this memorial prize to Jeffrey S. Juris (1971-2020), a remarkable social movement scholar who influenced a generation in the short time he was with us. Jeff was a committed ethnographer, who demonstrated in every article or book that acute analysis and theoretical brilliance need not be at odds with committed activism and critical engagement with social movements. He demonstrated this in his own work, but also furthered the case for what he called “militant ethnography.” As he explained: “My research has asked the following questions: What methods are most appropriate for studying social movements, particularly if we are interested in everyday activist practices, experiences, and subjectivities? What is the particular role of ethnography? How can we address power imbalances between activists and researchers? How can we make our research useful to the movements we work with? What challenges and contradictions do we encounter when trying to conduct politically engaged ethnographic research? Throughout my career, I have developed and implemented a model of politically engaged participant observation I call militant ethnography. Such an approach is meant to challenge the divide between researcher and activist, using my dual position as an organizer and anthropologist to not only gain access to movement networks, but also to generate deeper knowledge and more innovative theoretical insights about movement practices, experiences, emotions, and internal political struggles and debates than would otherwise be possible. I have also learned that it is important to maintain sufficient analytic distance in order to generate knowledge that is critical and useful for academics, members of the public, and activists themselves. Some of the challenges of such an approach include publishing in forums that are accessible to movements, negotiating heated internal conflicts, and finding a balance between political commitment and critical distance.”

This prize recognizes that commitment and Jeff’s legacy by honoring the best article published in the journal in the past three years that exemplifies that spirit and endeavor. I am very grateful to our jury, which consisted of Marianne Maeckelbergh (Ghent University), Natalia Ruiz-Junco (Auburn University), and Lorenzo Mosca (State University of Milan), for careful reading of the many articles in the running. Any social movement scholar would do well to read his work, but it is de rigueur for anyone engaging in ethnography of social movements. Networking Futures stands as one of the definitive books on the Global Justice Movement, and his chapter on militant ethnography in Constituent Imagination is recommended reading for any graduate students or scholars who are venturing into the field. Jeff was also an excellent and generous reviewer, a fact I discovered first when he “outed” himself following the publication of one of my articles in Social Movement Studies-much improved thanks to his insightful input, and later as an editor who witnessed his peer reviewing first-hand. Many established researchers simply stop reviewing for journals after a certain point, but Jeff’s generosity and reciprocity extended to all areas of his work and life, and he was a great supporter of social movement studies (the field and the journal).

Jeff was a committed activist who played a key organizing role in many mobilizations for social justice and radical social change in Europe, North America and Latin America. Although Jeff and I were rarely knowingly in the same place at the same time, our lives had strange parallels and connections that made me feel as though he was the only other person on earth who could understand certain things the way I did (e.g. we were both activist ethnographers from UC Berkeley studying the global justice movement in Spain at the same time for our doctoral dissertations) — or maybe that was just his gift. I often write with him in mind as my invisible interlocutor, whether I am arguing with him or taking inspiration from him. He was a brilliant and elegant writer. Jeff was razor sharp and never afraid to speak his mind, but also humble, generous, fun, and open—a rare combination to be sure. He was greatly loved by many and had a huge network of friends around the world, as I discovered at his memorial service. He will be greatly missed, but has left us a beautiful body of work that will continue to inspire scholars and activists for a very long time. Adios compañero. La lucha sigue. You can read Jeff Juris’s work in Social Movement Studies Free to view here. His posthumous book Radio Libre: Media and Autonomy in Mexico is in press. Stay tuned. ---Cristina Flesher Fominaya 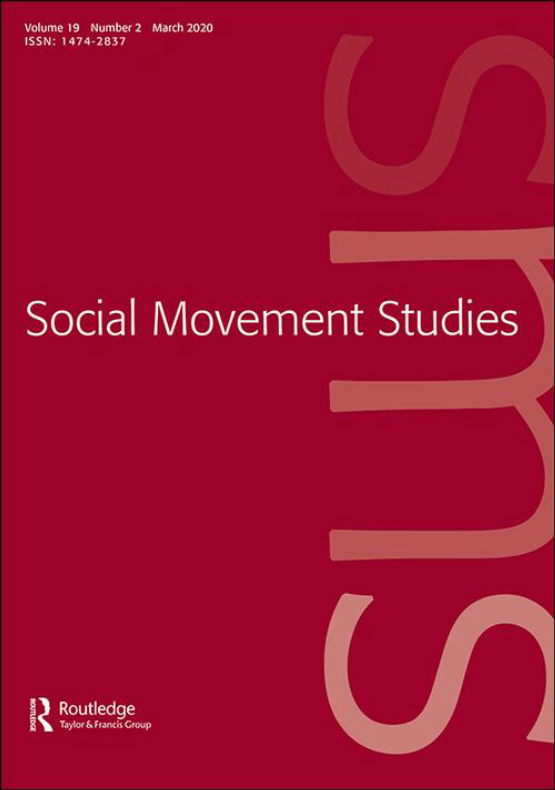 2 hours ago
Check out this prize winning article! Congratulations to Minwoo Jung! Imagining sovereign futures: the marriage equality movement in Taiwan https://t.co/RfgST9aJSO
1
0
2 hours ago
Check out "Making a deal with the devil? Portuguese and Finnish activists’ everyday negotiations on the value of social media", article by Carla Malafaia & Taina Meriluoto: https://t.co/1ZT8M4ooMe
1
0
2 days ago
Have a look at the open access article "Prefiguration and the post-representational politics of anti-deportation activism", by Dr Tom Kemp, here: https://t.co/7X3e3vHpJm
2
3
2 days ago
"Maintaining nonviolent selfdiscipline in hostile protest environments: evidence from the 2019 Baghdad protests", article by Vera Mironova & Sam Whitt, available here: https://t.co/YlLl9ajnpE
2
3