The CRISPP Essay Prize is awarded every year for the best article to appear in the previous year’s volume. Special issues, review articles and contributions to symposiums or debate pieces are not considered. We only look at articles that have been submitted as stand alone pieces, and have gone through the normal review process. The committee standardly consists of one of the editors and two members of the editorial board. The winner receives a cash prize, and their article is made free access for a year.

‘In this clear, timely, and well-argued piece, Cabrera defends institutional and moral cosmopolitanism against charges of arrogant disdain for particularist moral insights. Conversely, he argues, it is firm claims for state sovereignty that should be regarded as arrogant, as these presume a collective right to disregard the moral standing and political insight of outsiders. He sketches a cosmopolitan account of what he calls “instrumentally oriented institutional global citizenship,” which he argues embodies political humility by actively supporting equal standing among citizens, and ensuring openness to input and challenge through democratic accountability. The Jury was impressed not only by the importance of the topic and the author’s intervention, but also the creative way that it integrated attention to political emotions with issues of institutional design.’ 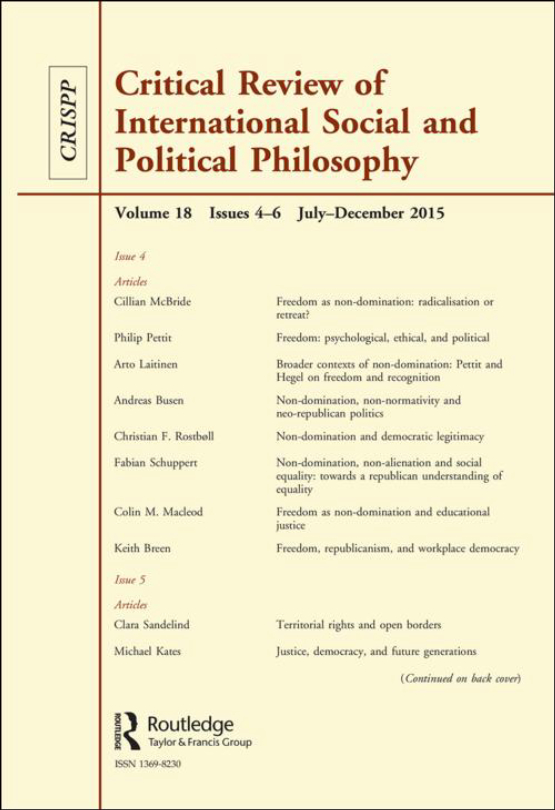 10 days ago
CRISPP 25.4 June 2022 now on line - articles on solidarity, indigenous land rights, climate migration, Kant, and the global basic structure plus a symposium on Bellamy A Republican Europe of States https://t.co/wbr5CHtxdt
1
13
55 days ago
Critical Review of International Social and Political Philosophy: Vol 25, No 3 Special Issue on Waldron’s Supersession and Historical Injustice thesis. Ed by Meyer and Waligore with reply by Waldron https://t.co/0cvSIy4knp
4
9
73 days ago
All but one of the critics on line and my reply to them now open access https://t.co/msfEYVcA2W
0
4
83 days ago
A great initiative from the Review ion Social Economics - author's discussing their articles in 10 minutes or less (TLDR - now you can watch and listen first) https://t.co/ooYNH2uKhk
0
0