The editorial board of the International Journal of Agricultural Sustainability (IJAS) are delighted to announce that the journal is becoming Open Access in its 21st year.

The IJAS has long sought to provide a forum for leading agriculture and food researchers, extensionists, activists and policy makers. We value the development of new knowledge on agricultural sustainability, and its spread to farms worldwide. The Open Access movement is supported by many governments, universities and international institutions across the world, and we are pleased the IJAS can be active innovator in this transition. The world agricultural and food systems face many challenges arising from the climate and biodiversity crises, growing inequality, continuing food poverty and damage to ecosystem services. Our aim is to support the transition to sustainable, productive, healthy and fairer food and agriculture systems in all countries of the world.

As part of the journal’s transition, all manuscripts received after 24 May 2022 will proceed through IJAS’s Open Access submission portal. Authors who submit after this date will be required to pay an article publishing charge (APC) if their article is accepted, which can be covered by an author’s funder or institution.

International Journal of Agricultural Sustainability is particularly interested in receiving manuscripts on:

We look forward to receiving your submissions and hope you join us to embrace  International Journal of Agricultural Sustainability’s Open Access future. 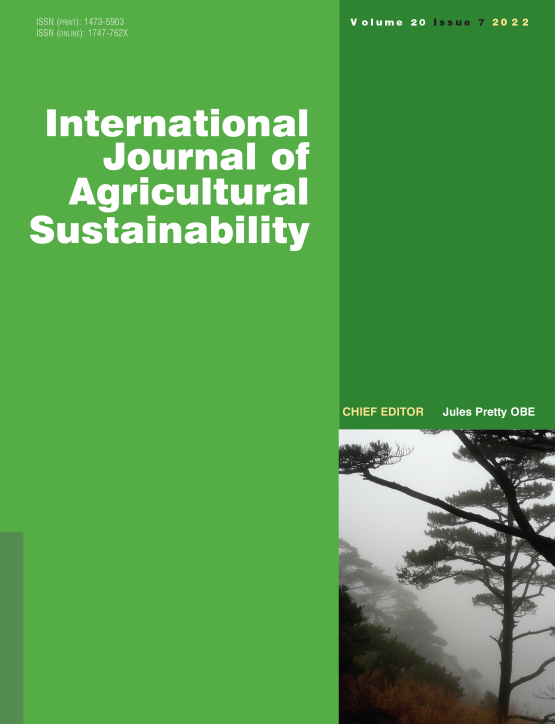 Jules Pretty is Professor of Environment and Society at the University of Essex, and Director of the Centre for Public and Policy Engagement. He was formerly Deputy Vice-Chancellor (2010-19).

He received a 1997 award from the Indian Ecological Society, was appointed A D White Professor-at-Large by Cornell University from 2001, and is Chief & Founding Editor of the International Journal of Agricultural Sustainability. He received an OBE in 2006 for services to sustainable agriculture, an honorary degree from Ohio State University in 2009, and the British Science Association Presidential Medal (Agriculture and Food) in 2015.

He is among the top 1% most cited scientists in the world. Research bibliometrics: h-index 100, 62.7k citations (Google Scholar); h-index 53 (SciVal) Find the latest tweets from @tandfenviro