Global Public Health is converting to Open Access from its 2023 volume.

As of 17 May 2023, Global Public Health (GPH) will be converting to an Open Access publishing model.

Launched in 2006, GPH offers a leading venue for publication of work on global health issues from the perspectives of public health and health-related social sciences, with special emphasis on politics and policy analysis relevant to research, intervention and practice.

The efforts of the Editor-in-Chief, Senior Editors, Associate Editors, Editorial Board members, and GPH’s wider community of authors, readers and reviewers, has led to GPH’s success in publishing traditional research articles alongside commentaries, review articles, research reports and a regular stream of special issues offering innovative perspectives on the social and political determinants of health and the global dimensions of public health challenges.

Listening to the considerations of GPH readers and contributors has given us the confidence that GPH will continue to thrive as an Open Access title with the benefits that increased readership and visibility will inevitably bring.

This conversion to Open Access ensures that the research published in GPH will be disseminated internationally with no barriers to access. This, combined with the market-leading web platform provided by Taylor & Francis, and our innovative communications strategies, will mean that all authors who chose to publish in GPH will reach the widest possible audience.

As part of this transition, all manuscripts received after 17 May 2022 will proceed through GPH’s new Open Access submission portal. Authors who submit after this date will, if their article is accepted, be required to pay an article publishing charge (APC) which can be covered by an author’s funder or institution.

Global Public Health is particularly interested in receiving manuscripts on:

Interested authors should visit the Taylor & Francis Open Access Members and  Open Access Agreements pages in case they are based at an institution that may have funds available to authors wishing to publish in  Global Public Health. Interested readers may also want to consider signing up to receive  latest article alerts to keep up-to-date with the latest research published in the journal.

We look forward to receiving your submissions and hope you join us to embrace Global Public Health’s Open Access future. 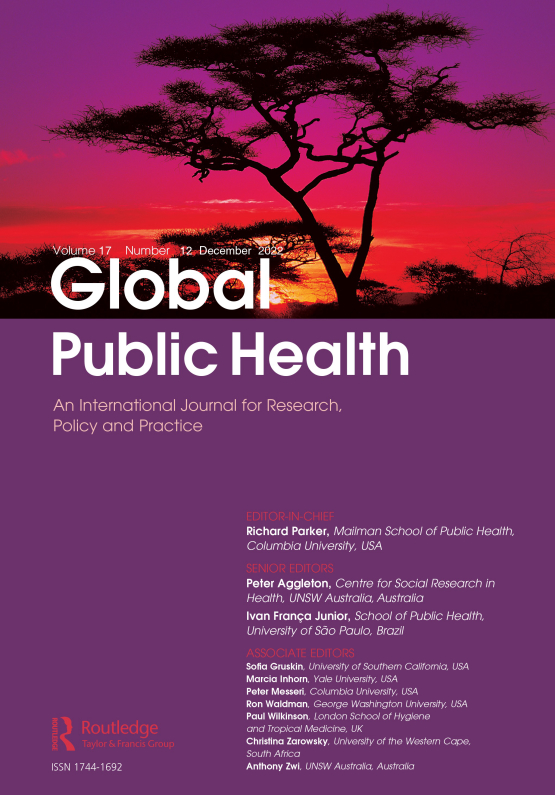 Richard Parker is Professor Emeritus of Sociomedical Sciences and Anthropology and a member of the Committee on Global Thought at Columbia University in New York City. He is also the Director and President of the Brazilian Interdisciplinary AIDS Association (ABIA), a leading non-governmental AIDS organization in Brazil, as well as founder and Co-Chair of Sexuality Policy Watch, a global coalition of researchers, policymakers and activists from a wide range of countries and regions with secretariat offices in Rio de Janeiro and New York City, and founder and Chair of Global AIDS Policy Watch, a knowledge network and policy watchdog initiative on the global HIV epidemic.

Dr Parker was educated at the University of California, Berkeley, where he received his PhD in Social and Cultural Anthropology in 1988. He is the author of more than 300 publications, including more than 50 books and edited volumes, where his research has focused on the social and cultural construction of gender and sexuality, the social aspects of HIV/AIDS, the relationship between social inequality, health and disease, and the politics of global health.

He has been a leading participant in international HIV/AIDS research for more than 35 years, helping to establish social science research on the global epidemic through his work. He has conducted long-term research in Brazil since the early 1980s, as well as working on comparative studies carried out in Asia, Africa, North America and other parts of Latin America and the Caribbean. Navigate the links below to read a selection of popular recent open access articles from the journal.

Looking to read more from the journal? Click below to start reading, or signup to receive free content alerts Global Public Health is welcoming submissions. Find out how to submit your paper by reading the Instructions for Authors.

FIND OUT MORE
@tandfonline
Our next webinar takes a deep dive into the open research landscape Join Head of Open Research, Matt Cannon, for a detailed introductory session on all things open, from licenses and data to peer review and pre-prints, and beyond ↗ 🔓 https://t.co/WSy9uD3R1y #AcademicChatter https://t.co/01kZLXD2M9
#RGPH #PublicHealth#GlobalHealth