Critical Arts is a peer-reviewed journal publishing 6 numbers annually, in the general fields of communication, cultural and media studies, art and digital culture and critical indigenous qualitative methodologies. Four of the six numbers are reserved for general issues and single submissions. Two are allocated to theme issues. Recent topics include ‘Brand China’, the ‘Ethnographic Turn in Art’, ‘African Cultural Studies’ and ‘Media and Empire’.

Critical Arts encourages articles that can potentially influence the ways in which disciplines think about themselves. Our niche includes critical inter-hemispherical dialogues generated within South-North and East-West relationships. The Journal addresses how people, institutions and constituencies cope within, resist and engage this relational nexus. 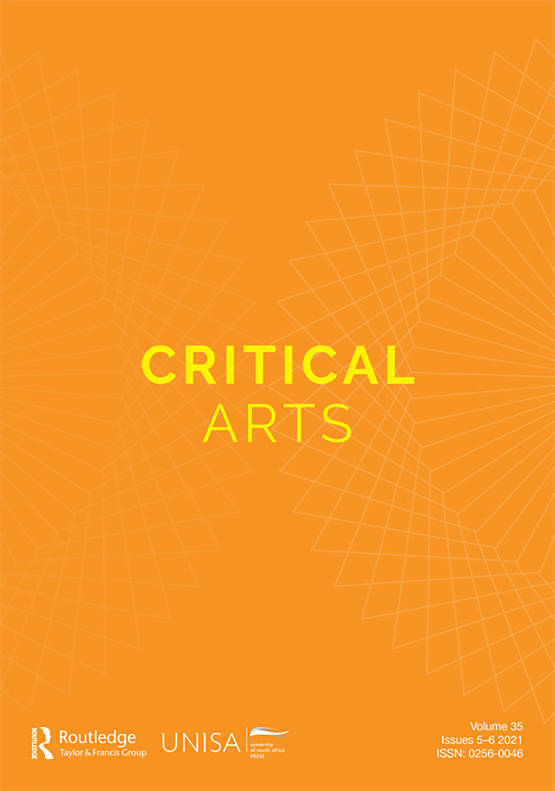 Submissions should be made online via ScholarOne Manuscripts (in cases where internet connectivity is not conducive to a ScholarOne submission, we accept manuscripts submitted via email to the Critical Arts office.) Send any enquiries to David Nothling at [email protected] and/or co-editors, Keyan Tomaselli, at [email protected] and Lauren Dyll, at [email protected]). Submissions should be original works not simultaneously submitted elsewhere, between 5000 to 7000 words in length. Page charges apply for authors affiliated with South African universities (see instructions for authors for more on APC).

18 hours ago
RT : The International Journal of #ArtTherapy is recruiting for a Deputy Editor & 3 Associate Editors to join the Editorial Boa…
6
0
18 hours ago
We love signing new book contracts! Looking forward to publishing this one! https://t.co/lUJ2RJdsD4
1
7
18 hours ago
RT : #Trauma Treatment through Art Therapy: a ‘women and trauma’ group in #Tanzania This newly published article by P. Luzzatt…
6
0
18 hours ago
RT : Just realized that made the introduction to my book available for free online! You can read it at https:…
3
0