Since its founding in 1984, Critical Studies in Media Communication (CSMC) has become the foremost journal in our discipline to feature innovative critical, cultural, and Cultural Studies research that theorizes the complex nuances of media in all its myriad forms. We look forward to facilitating CSMC’s continuance as an academic home for invigorating and heuristic conversations that simultaneously center communication and prioritize interdisciplinarity. Living amidst a technological revolution—wherein change in media often outpaces, for instance, popularity, audience investment, and the development of law and policy—scholars’ arguments must actively attend to being timely and timeless.

We are interested in featuring research that expands CSMC’s intellectual footprint and deepens our field’s conversations about ideology, hegemony, discourse, power, and normativity. As they relate to media, such topics may include analyses of:

All articles will be made permanently and freely available online immediately after acceptance, and publication is free of charge for the authors and their institutions.

The entirety of our editorial term (2023–2025) will be anchored by our commitment to embedding inclusion, diversity, equity, and access (IDEA) throughout our editorial praxis. At the outset of our tenure, our priorities include building infrastructure that: demystifies publication processes for emergent scholars; renders our editorial decision-making more transparent; and partners the ethos and tone of peer review with respect for our many scholarly differences (e.g., paradigms, academic writing experience, positionality, access to mentorship, etc.). Aligning with Mohan J. Dutta’s (2006) “Ten Commandments of Reviewing,” we believe that peer review can be unapologetically rigorous and humanizing. Should we encounter dehumanization in a peer review, we will initiate a dialogic process with the author(s) to decide if or how to engage the potential of harm. We also align with Nancy Evelyn Day’s (2011) caution in “The Silent Majority” against being silent about the impact of rejection. Therefore, our rejection email template includes guidance for processing academic rejection and our rationale for desk rejections is publicly available.

We also aim to be responsive to scholars who have rightfully called out our discipline for perpetuating exclusion via our academic journals. Take for instance those who have drawn our attention to the discipline’s over reliance on ethnocentric, Western, U.S. American, and Eurocentric logics. In response—as a first step—we are expanding our Editorial Board to include more diverse international representation, including scholars with faculty, administrative, and/or scholar–activist profiles. Doing so will help increase the journal’s global profile in terms of submissions, for which we aim to be prepared with a reviewer pool of scholars whose expertise resides in not only their research profiles but also where they are located, the borders they cross, and the homeland(s) they identify with.

As Black women academics, we are amply familiar with what it means to live a politics of intervention and determinedly sustain our IDEA praxis. We are committed to reflexivity about the power of gatekeeping that our position as Editors entails alongside learning, unlearning, and relearning with respect to new areas, new knowledges, and the particular ways we are structurally and systemically privileged. We are also fortunate to have been mentored and sometimes schooled by those who have served in this role before us. In order to “lift as we climb,” we know that we must remain open to feedback, process improvement, and the potential of failure that accompanies piloting new IDEA strategies. We look forward to working alongside you during our editorial term.

Critical Studies in Media Communication (CSMC) is a peer-reviewed publication of the National Communication Association. CSMC publishes original scholarship in mediated and mass communication from a cultural studies and/or critical perspective. It particularly welcomes submissions that enrich debates among various critical traditions, methodological and analytical approaches, and theoretical standpoints.

For more details about how to submit your research to CSMC, please review our Instructions for Authors.

Unless specifically indicated otherwise, articles in this journal have undergone rigorous peer review, including screening by the editor and review by at least two anonymous referees. 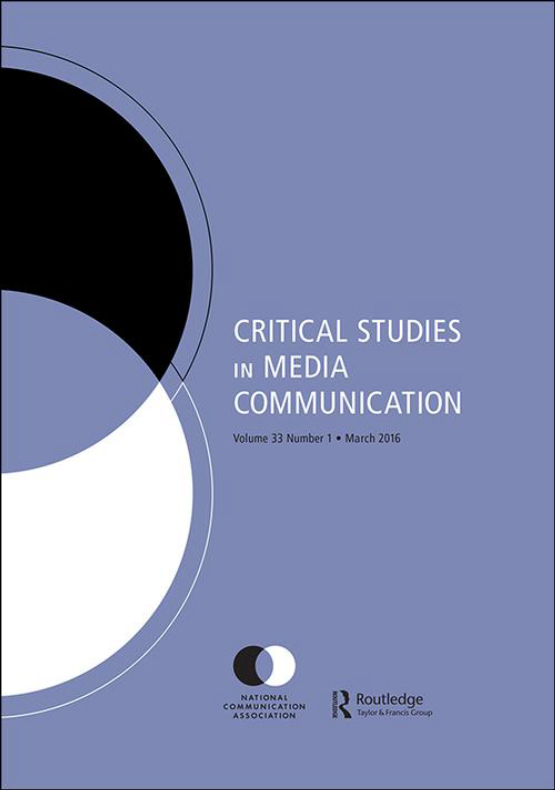 @NatComm
Want to become the next editor of NCA’s Communication and Critical/Cultural Studies Journal or the Text and Performance Quarterly? Nominations are due Jan. 31. All editors receive an annual stipend. https://t.co/bR0L3tYddJ #Journalist #HigherEd #Research #NCA