Congratulations to the Book Prize Winner

Ukranian Nationalists and the Holocaust by John-Paul Himka

Congratulations to the Book Prize Winner Ukranian Nationalists and the Holocaust by John-Paul Himka. It is our great pleasure to announce that the 2022 Canadian Association of Slavists’ Taylor & Francis Book Prize has been awarded to John-Paul Himka’s Ukranian Nationalists and the Holocaust: OUN and UPA’s Participation in the Destruction of Ukrainian Jewry, 1941-1944 (Stuttgart: Ibidem Press, 2021).

In its final report, the book prize committee offers the following commendation: “With Ukranian Nationalists and the Holocaust John-Paul Himka has written a work of exemplary historical scholarship that provides a critical and determinedly objective view of its highly complex subject. He provides an exhaustive analysis of primary sources in several languages – among them Soviet archival materials available only since the 1990s, German records, OUN documents (including directives, field reports, and confessions), and testimonies from Jewish survivors, Poles, and Ukrainians – and he takes great care in examining different versions of the same documents to illuminate fabrications and in analyzing quantitative data. Ever attuned to the complex ethnic and ideological terrain of wartime Ukraine, he compares varying accounts to discern the motivations behind testimonies and what they reveal about a given course of events. When outlining the actions of Ukrainian nationalists – whether as participants in spontaneous pogroms, as members of the Ukrainian Insurgent Army, or as police in the employ of the occupiers – he distinguishes between actions based on nationalists’ own initiative and actions carried out in service to the Nazis. He meticulously traces how OUN formations were created, how their operations were determined, what drove them, and how these changed over time, seeking to understand why they did what they did. In detailing the harrowing experiences of Jews, Himka provides case studies of crimes committed against them, illuminating a topography violence that leaves no doubt about the part that the OUN played in the Holocaust; these microstudies also humanize the victims. Ukrainian Nationalists and the Holocaust is impeccably researched and written in clear, measured prose that eschews judgement.”

We are pleased to also announce that Kristy Ironside’s A Full-Value Ruble: The Promise of Prosperity in the Postwar Soviet Union (Cambridge, MA: Harvard University Press, 2021) earned honourable mention. The committee reports that, “based on archival and published primary sources, A Full-Value Ruble is a smart and intelligible socioeconomic history on the postwar era through the Khrushchev years. Ironside clarifies factors that would have a bearing on the ultimate collapse of the Soviet Union. Moreover, she demonstrates how the state doggedly strove to solve its money problems and explains why it was unable to overcome obstacles of its own making: a preoccupation with egalitarianism, favouritism for (proletarian) urban over the rural (peasant) productivity, and disengagement from the global economy, to name a few.”

Established in 2014, the Canadian Association of Slavists’ Taylor & Francis Book Prize is awarded annually for the best academic book in Slavic, East European, and Eurasian Studies published in the previous calendar year by a Canadian author (citizen or permanent resident). The book prize jury consists of three members chosen by the CAS executive. The winner receives a cash award of $500 CAD and recognition at the annual conference of the Canadian Association of Slavists. 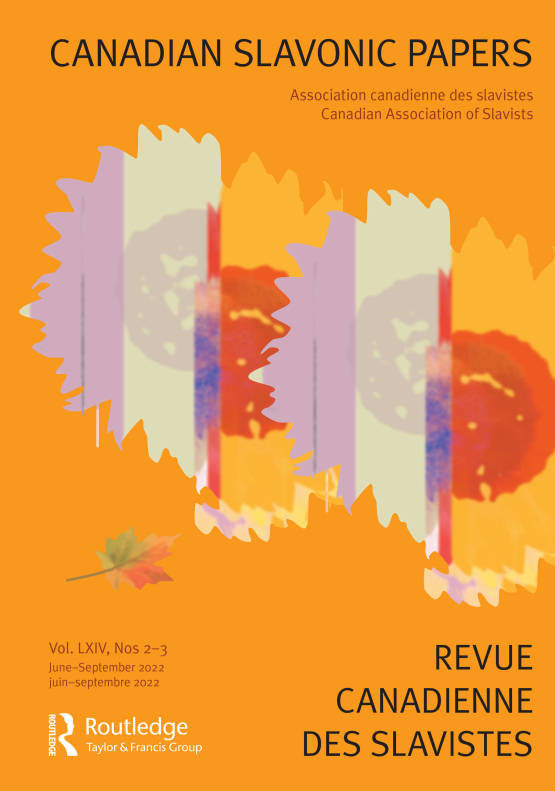 The book must be in the form of a monography, preferably by a single author, or by no more than two authors.

Authors must be citizens or permanent residents of Canada.

The work must originally be published in French or English either in or outside Canada.

Textbooks in the strict sense of the word do not qualify, but a broad interpretive work of a major period or area qualifies.

Translations, bibliographies, reference works, edited volumes, and smaller works such as pamphlets are not eligible.

Nomination for the prize can come from an author, a third party, or a publisher. There is no limit on the number of entries a publisher may submit.

Send an e-mail to the office of Canadian Slavonic Papers/Revue canadienne des slavistes ([email protected]) to notify the Canadian Association of Slavists of your intent to nominate a publication for the CAS’ Taylor & Francis Book Prize. Please copy this e-mail to yourself as well.

Send one copy of the eligible monograph to each member of the book prize jury. Submissions should be marked “The Canadian Association of Slavists’ Taylor & Francis Book Prize Nomination.”

If you would like to receive an acknowledgement that your nomination was received, please enclose, with the copy mailed to a jury member, a note with your e-mail address or a self-addressed stamped envelope.

Nominations for next year should be postmarked no later than 5 May 2023. It is the responsibility of the author (if they self-nominate), their nominator, or their publisher to send the books to the jury. Please note that books sent to members of the jury will not normally be returned once the competition is over. However, special arrangements to return a book may be made between a jury member and the nominator after the competition ends.

@CanSlavPapers
We are pleased to inform that all the contributions to our recent forum on Ukraine have been made freely accessible until June 2023. https://t.co/PJqg74xmSM