Hispanic Studies Author and Subject Indexes of Articles and Reviews
1923–2003.

Supplements, in 3 volumes, to the Bulletin of Spanish Studies

Now made easily searchable online, these indispensable reference works record in three volumes the entire contents of all issues of the Bulletin of Spanish Studies and Bulletin of Hispanic Studies (previously Bulletin of Hispanic Studies), as edited and published from Liverpool University (1923–1995), then from Glasgow University (1996–2003). The first fully retrospective Indexes of the Bulletin’s articles and reviews to be produced since 1973, these ample volumes also include important but previously omitted material and give the full facts on all the journal’s special monographic numbers and supplements which appeared between 1923 and 2003.

These Hispanic Studies Author and Subject Indexes are currently being updated to make equally available to users internationally the detailed information required (on authors, titles, works subjects etc.) to facilitate online access to any and all articles, reviews and other features published in the Bulletin from 2004 up to the present time. Until these updates are completed, users may consult the Annual Indexes of all volumes of the Bulletin of Spanish Studies from 2004 to the current year, using the links provided below.

The Bulletin’s Hispanic Studies Author Indexes of Articles and Reviews 1923–2003 catalogue alphabetically, by name of author(s) responsible, every one of the more than 3,000 articles and over 9,000 book reviews on Spain, Portugal and Latin America which have appeared in this journal during 80 years of unbroken publication.

The Bulletin’s Hispanic Studies Subject Index of Articles 1923–2003 and the Bulletin’s Hispanic Studies Subject Index of Reviews 1923–2003 provide invaluable subject-related information on all articles, review-articles, memoirs, regular features and book reviews that have appeared in the Bulletin down the decades, from its first issues in Bulletin of Spanish Studies, Volume 1 (1923) up to the issues in Bulletin of Spanish Studies Volume 80 (2003). The Subject Indexes list alphabetically not only the authors and works treated (poems, novels, dramas, histories, philosophies, paintings, films and the rest), but also identify the numerous literary, creative and cultural themes, trends, ideas, genres and periods, and the historical events, people, attitudes, times and movements that have been dealt with in the innumerable contributions published in the Bulletin up to 2003. In the Bulletin’s articles and book reviews readers will find studied and elucidated the works of many major writers, artists and thinkers who have proved of significant, even decisive, influence in the development of culture and civilization in Spain, Portugal and Latin America, from the Early Middle Ages through to the Present Century.

For the first time, scholars conducting literary, linguistic, cultural, ideological and historical researches into the numerous countries that make up the Ibero-American world are given easy access to reliable and sufficiently detailed information on the Bulletin’s entire archive of articles and book reviews contributed by international scholars during the best part of a century.

These extensive Indexes confirm for public record the enduring role which the Bulletin of Spanish Studies (previously Bulletin of Hispanic Studies) has fulfilled wherever in the world Hispanic and Lusophone Studies and Researches are being pursued.

For further information on the scope and methodology of the Bulletin’s Hispanic Studies Author and Subject Indexes 1923–2003, it is recommended users consult the introductory material contained in each online volume, and especially: Ann L. Mackenzie, ‘A Note for Users’, BSS, LXXXV (2008), Supplement, 11–21 and ‘A Further Note for Users’, BSS, LXXXVIII, Supplement (2011), 11–15.

For the Annual Indexes to the Bulletin of Spanish Studies from Volume Year 2004 up to the current Volume Year, see:

The Bulletin publishes articles and reviews, as well as some full-length studies and reference-works, on almost any and all aspects and topics concerned with Spain, Portugal and Latin America.

The articles, review-articles, reviews and other longer works published in the Bulletin deal with an impressive number of different authors, works, themes, genres and periods, researching both the Old and the New Worlds of Hispanic cultures and civilizations. In addition, the Bulletin is currently extending further its already wide-ranging interests by publishing regularly special issues wholly dedicated to Hispanic Visual Studies.

To be accepted for publication submissions to the Bulletin need to be original scholarly works not previously published elsewhere.

All articles and books published will have been peer-reviewed and approved by international specialists in the appropriate fields. Peer assessors involved in the evaluation processes include members of the Bulletin’s international Editorial Board and/or Editorial Advisory Committee (names as published) and also by external assessors world-wide, selected for their recognized expertise and standing in the areas concerned.

Rigorous peer assessment procedures ensure that all works published in the Bulletin meet the highest standards of scholarship and make an enduring and influential contribution to Hispanic Studies and Researches. 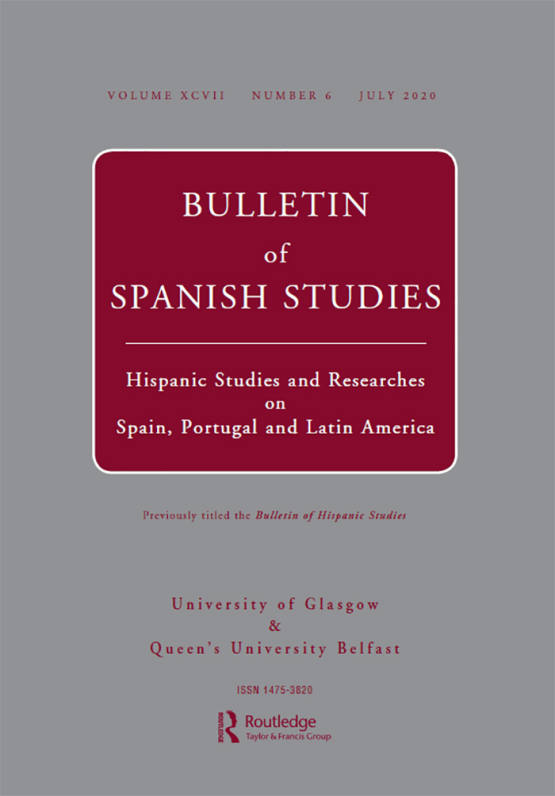 @spanishbulletin
Fun times recording our latest podcast episode with @rdglopez , winner of our Whiston prize for best article of 2022. Stay tuned to your podcast channels, we’ll let you know when it drops https://t.co/1j9xtZbye0 https://t.co/gDJ7mS2tMs