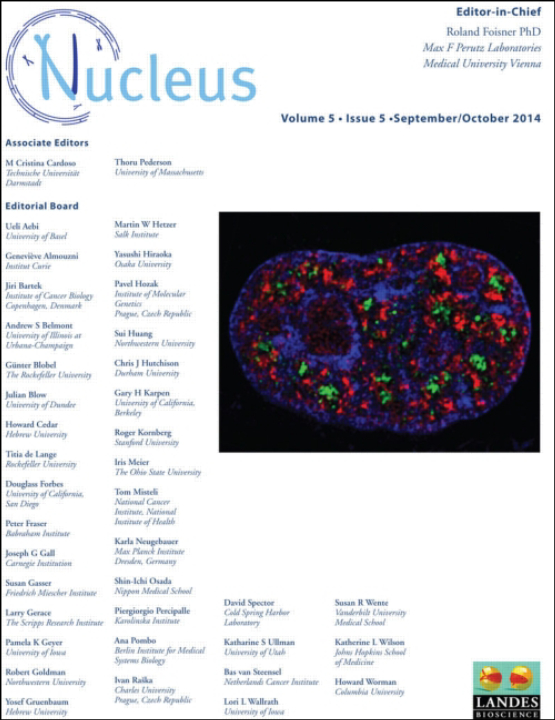 The nucleus is a highly organized, yet dynamic environment where DNA, RNA, proteins and small molecules are resident in a complex milieu.  While much progress has been gained in our understanding of transcriptional regulation and DNA replication and the protein machinery involved, less attention has been focused on the functional roles of regulatory RNAs within the nuclear environment. Further, three-dimensional folding of chromatin resulting in higher-order organization of euchromatin and heterochromatin is patterned early in development in a cell-type specific manner, but the molecular mechanisms responsible are only beginning to emerge and may also involve noncoding RNAs.

Noncoding RNAs, which are often retained within the nucleus, represent an enormous potential reservoir of regulatory control.  Biochemical analyses have revealed molecular interactions of noncoding RNAs with DNA, protein, and other nuclear RNAs, and their ability to act as molecular scaffolds to bridge other molecular interactions is an emergent property. Yet, even though these molecular interactions have been observed, we lack a broader understanding of the “rules of engagement” for nuclear noncoding RNAs and, in many cases, their modes of action. An expanded repertoire of molecular techniques in recent years has revealed the existence of many different classes of noncoding RNAs (e.g. miRNA, siRNA, piRNA, tRNA fragments and lncRNAs).  This vast catalogue of noncoding RNA species has the ability to be involved in all levels of nuclear organization and regulation, including chromatin organization, transcriptional regulation, and condensate/nuclear body formation.

Dr. Dawn Carone is an Associate Professor of Genetics in the Biology Department at Swarthmore College. The Carone lab studies noncoding RNA and nuclear organization.  We investigate the functions of noncoding RNAs that are expressed from repetitive elements in the human genome and the contribution these noncoding RNAs have to nuclear structure, gene regulation, and human disease.

Disclosure statement: Dr. Carone declares no conflict of interest regarding this work.

All manuscripts submitted to this Article Collection will undergo a full peer-review; the Guest Advisor for this collection will not be handling the manuscripts (unless they are an Editorial Board member). Please review the journal scope and author submission instructions prior to submitting a manuscript.

The deadline for submitting manuscripts is August 31, 2023.