Annals of Human Biology is converting to Open Access

The Nobel Prize winner, Sir Peter Medawar, described Human Biology as “not so much a discipline as a certain attitude of mind towards the most interesting and important of animals”. The Society for the Study of Human Biology (SSHB) was conceived in 1958 by a cadre of scientists who fervently believed in Medawar’s statement; they wanted to recognise and champion research that viewed Homo sapiens not simply as a phylogenetic specimen but as an organism within a context that was genetic, evolutionary, auxological, constitutional, and environmental.

From their commitment and belief in the scientific authenticity of human biology as an “attitude of mind” that deserved a place in the international scientific press, was born the Annals of Human Biology in 1974. Whilst initially described as a journal of human population biology, under the editorship of Professor James Tanner, it rapidly became recognised for its commitment to publishing scientific articles of high scientific quality that sought to understand Homo sapiens in the context of a holistic canvas. Subsequent editors have continued this theme so that today the Annals of Human Biology is recognised internationally as a journal committed to the mission of publishing the very best research within the field of human biology.

As the Annals of Human Biology evolves into an Open Access journal in 2023 its vision is not only to uphold the principles that have guided it for half a century, but to accept and encourage the opportunities offered by open access publishing. It will continue to publish research of the highest quality accepting that its original remit has expanded to cover a great diversity of subjects that has led to a variety of subject sections under the umbrella of Human Biology. Indeed the importance and growing relevance of Human Biology is demonstrated by this diversity that touches all aspects of the biology of Homo sapiens.

As part of this transition, from 13th September 2022, all manuscripts submitted to the journal will, if accepted, be required to pay an article publishing charge (APC) which can be covered by an author’s funder or institution. We look forward to receiving your submissions and welcome your support in this exciting new open access chapter for the journal.

Annals of Human Biology welcomes submissions to the following sections: 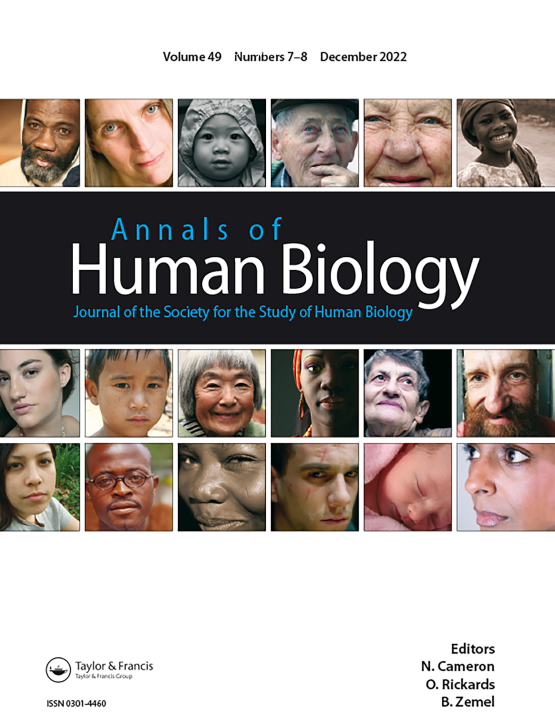 Noël Cameron is Emeritus Professor of Human Biology at Loughborough University, UK. He is a graduate of the Universities of Nottingham, Loughborough, and London.  At Loughborough he initially studied for an MSc in Human Biology and then pursued a PhD in Medicine at University College London under the supervision of Professor James Tanner at the Institute of Child Health.  He was subsequently appointed to a lectureship and undertook research in normal and abnormal child growth. He spent from 1984 to 1997 as Associate (1987) and then Full Professor of Anatomy and Human Biology (1994) in the Department of Anatomy of the University of the Witwatersrand, South Africa. In addition to several rural longitudinal growth studies, he initiated the Birth to Twenty (Bt20) birth-cohort study in Soweto and Johannesburg in 1991 which has become the longest running and most detailed longitudinal study of child health and growth in any developing country.  Noël Cameron returned to the UK in 1997 as Professor of Human Biology at his alma mater, Loughborough University. He was made a Fellow of the Royal Society of Biology in 1998 for his significant contribution to research in human biology.

He has published over 300 peer reviewed papers, scholarly chapters, and 7 books and has in excess of 16,000 citations.  Noël Cameron was a Visiting Fellow at the University of Pennsylvania (1990), Visiting Professor of Public and International Affairs at Princeton University (2008-2010) and the William Evans Visiting Fellow at Otago University, New Zealand (2015) and is an Honorary Research Associate of the Evolutionary Studies Institute at the University of the Witwatersrand, South Africa. He was awarded the Doctor of Science (DSc) degree from Loughborough University in 2018 for his significant contribution to knowledge in human growth and development.